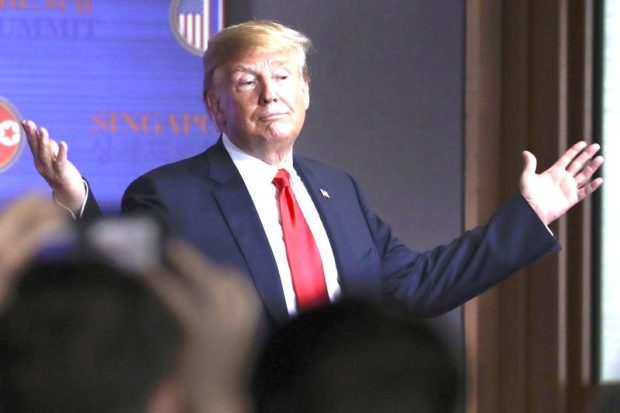 President Donald Trump gestures as he leaves a press conference at the Capella resort on Sentosa Island Tuesday, June 12, 2018 in Singapore. AP PHOTO

A look at some of Trump’s statements and how they compare with the facts:

TRUMP’S TWEETS: “Just landed – a long trip, but everybody can now feel much safer than the day I took office. There is no longer a Nuclear Threat from North Korea … Before taking office people were assuming that we were going to War with North Korea. President (Barack) Obama said that North Korea was our biggest and most dangerous problem. No longer – sleep well tonight!”

THE FACTS: Trump is wrong to suggest North Korea no longer poses a nuclear threat. The five-hour summit did give Trump and Kim a chance to express optimism and make of show of their new relationship. But the two countries didn’t nail down how and when the North might denuclearize or shed light on the unspecified “protections” Trump pledged to Kim and his government.

Those details could prove major sticking points in the future while North Korea is believed to maintain a nuclear arsenal capable of threatening the U.S mainland. Independent experts say the North could have enough fissile material for anywhere between about a dozen and 60 nuclear bombs, and last year it tested long-range missiles that could reach the U.S.

Trump is also wrong to say there was an assumption before he took office that the United States would go to war. It wasn’t until Trump’s tenure that North Korea began testing an intercontinental ballistic missile and the bellicose rhetoric between the two leaders ramped up. Fears of conflict were particularly acute after Trump called Kim “Rocket Man” and Kim pledged to “tame the mentally deranged U.S. dotard with fire.”

TRUMP: “Chairman Kim and I just signed a joint statement in which he reaffirms his unwavering commitment to complete denuclearization of the Korean Peninsula. We also agreed to vigorous negotiations to implement the agreement as soon as possible, and he wants to do that. This isn’t the past. This isn’t another administration that never got it started and, therefore, never got it done.”

THE FACTS: He’s wrong in suggesting his administration is the first to start on denuclearization with North Korea. The Bill Clinton and George W. Bush administrations both did so.

Clinton reached an aid-for-disarmament deal in 1994 that halted North Korea’s plutonium production for eight years, freezing what was then a very small atomic arsenal. Bush took a tougher stance toward North Korea, and the 1994 nuclear deal collapsed because of suspicions that the North was running a secret uranium program. But Bush, too, ultimately pursued negotiations. That led to a temporary disabling of some nuclear facilities, but talks fell apart because of differences over verification.

THE FACTS: His numbers are incorrect. The Clinton and Bush administrations combined to provide some $1.3 billion in assistance from 1995 to 2008, according to the Congressional Research Service, a nonpartisan arm of Congress. Slightly more than half was for food aid and 40 percent for energy assistance.

Trump also is wrong in saying “nothing happened” in return. North Korea stopped producing plutonium for eight years under the 1994 agreement. Just how much was achieved, though, is in question, because of the suspicions that emerged later that North Korea had been secretly seeking to enrich uranium.