Explainer: What is the 'Doomsday Clock' and how does it work?

Explainer: What is the ‘Doomsday Clock’ and how does it work? 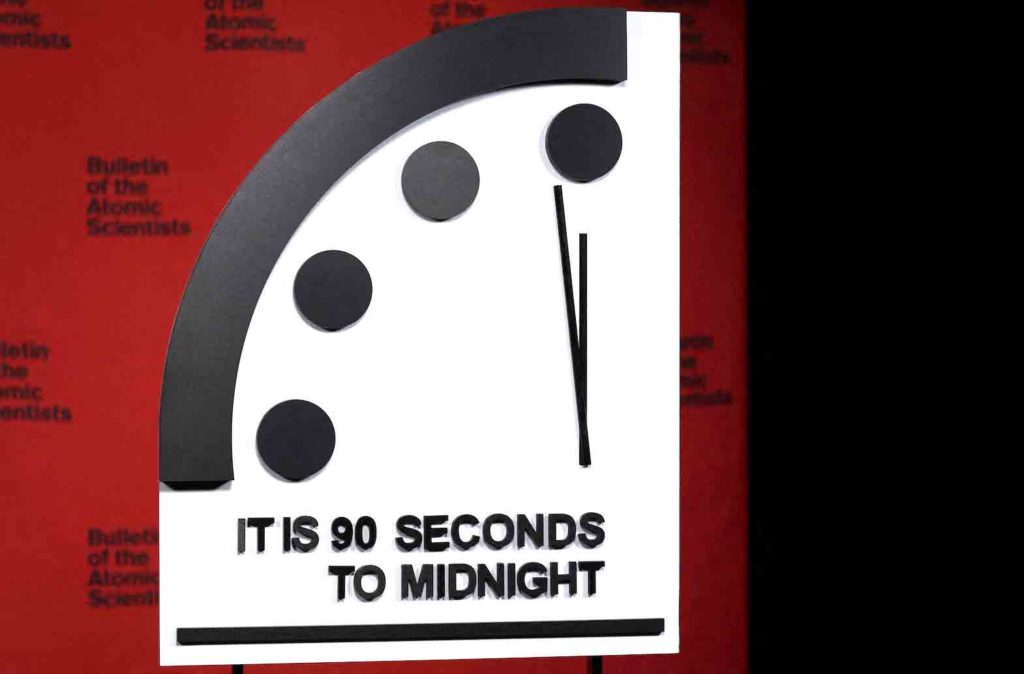 The clock with the Bulletin of the Atomic Scientists is placed ahead of the announcement of the location of the minute hand on its Doomsday Clock, indicating what world developments mean for the perceived likelihood of nuclear catastrophe, at the National Press Club in Washington, U.S., January 24, 2023. REUTERS/Leah Millis

Atomic scientists reset the “Doomsday Clock” on Tuesday, moving its hands to 90 seconds to midnight – closer than ever before to the threat of annihilation.

WHAT IS THE DOOMSDAY CLOCK?

The Doomsday Clock is a symbolic timepiece showing how close the world is to ending. Midnight marks the theoretical point of annihilation.

The hands of the clock are moved closer to or further away from midnight based on the scientists’ reading of existential threats at a particular time.

HOW IS THE CLOCK SET?

A Chicago-based non-profit organization called the Bulletin of the Atomic Scientists updates the time annually based on information regarding catastrophic risks to the planet and humanity.

A board of scientists and other experts in nuclear technology and climate science, including 13 Nobel Laureates, discuss world events and determine where to place the hands of the clock each year.

The clock was created in 1947 by a group of atomic scientists, including Albert Einstein, who had worked on the Manhattan Project to develop the world’s first nuclear weapons during World War Two.

WHAT TIME IS IT NOW?

Its setting reflects a world in which Russia’s invasion of Ukraine has revived fears of nuclear war. The war was largely but not exclusively the reason for the hands moving forward, the scientists said.

More than 75 years ago, the clock started ticking at seven minutes to midnight.

At 17 minutes to midnight, the clock was furthest from doomsday in 1991, as the Cold War ended and the United States and Soviet Union signed the Strategic Arms Reduction Treaty that substantially reduced both countries’ nuclear weapons arsenals.