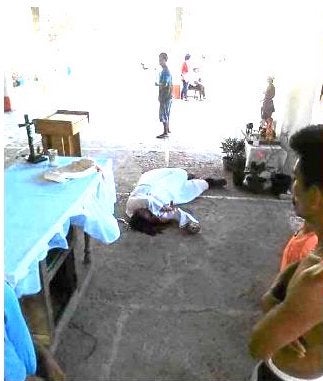 “Your enemy the devil prowls around like a roaring lion looking for someone to devour” (1 Peter 5:8).

A few days ago, the Catholic world was deeply saddened and terribly disturbed. Bishop Sofronio Bancud, SSS, and the clergy of Cabanatuan wept beyond consolation because one of their own, Fr. Richmond Nilo, parish priest in Zaragoza, Nueva Ecija, was assassinated in broad daylight.

Fr. Nilo is the third Catholic priest to be murdered in recent months – Fr. Tito Paez in December 2017 and Fr. Mark Anthony Ventura in April 2018 – paradoxically, as the Philippine Catholic Church is celebrating 2018 as the “Year of the Clergy & Consecrated Persons.”

“Who will rid me of this meddlesome priest?” said King Henry II about Saint Thomas Becket. Like blind fanatics, the knights of the King went to the Cathedral, searched for the Archbishop, hacked him and split his skull to make the King happy, but the king was unnerved instead.

Archbishop Thomas Becket was canonized in 1173 and, to prove his honest remorse, King Henry did public penance in July 1174.

Archbishop Villegas concluded the story: “The King became penitent and offered penance. The murderers were disgraced. Today, the murderers are commended and the king is undisturbed.”

It’s diabolical. And the brutal and bloody method has been pre-tested in Hell. Pope Francis has always warned us that Hell’s sharpened preoccupation is to tear down the Roman Catholic Church (Address, September 9, 2016).

So convinced that the Catholic Church is the vessel of God’s love and the channel of true revelation, the Lord of Lies from the Inferno leads the pack of the most unfriendly forces and vilest critics that have attacked the Church since her birth on the First Pentecost Sunday.

Satan’s main target is the clergy and he operates so strategically with one focused Key Performance Indicator (KPI): To put the wonderful band of ordained brothers into oblivion. Why? Because the Holy Priesthood is “the nerve center of the Church’s whole life and mission” (John Paul II, October 27, 1995),

Why is the clergy Satan’s main target?

Père Jean-Marie Vianney is the patron saint of all parish priests. Believing that The Priest is indeed situated in the very heart of the Church, he once verbalized:

What the Evil One wanted all along was to see to it that – out of the 400,000 clergy globally – only the bald shepherds of the flock in walking canes and wheel chairs (meaning, the old and worn-out bishops and priests) are left in space and time to continue the evangelizing mission of the Church.

Rearing its ugly tail, Satan salivates to see our bishops, priests, and all coadjutors of the Supreme Pontiff of the Universal Church who are reaching out to the flock of some 1.5 billion Catholics decimated and all gone. His methods are clear cut: Divide them, destroy priestly vocation, hit them hard in their human weakness, and Assassinate them.

And the voice of Archbishop Socrates Villegas was full of trust in the Lord: “We are not afraid… They want to bury us priests. But they forget that we priests are seeds. When you bury us, we will grow more and flourish. You cannot stop the Gospel from growing. You cannot stop God from being God. You cannot muzzle the voice of Truth.”

As our Lord Jesus has said: “Unless a grain of wheat falls into the earth and dies, it remains alone; but if it dies, it bears much fruit” (John 12:24).

Jose Mario Bautista Maximiano is the author of 23 Plus Contemporary People (2019). Comments to [email protected]