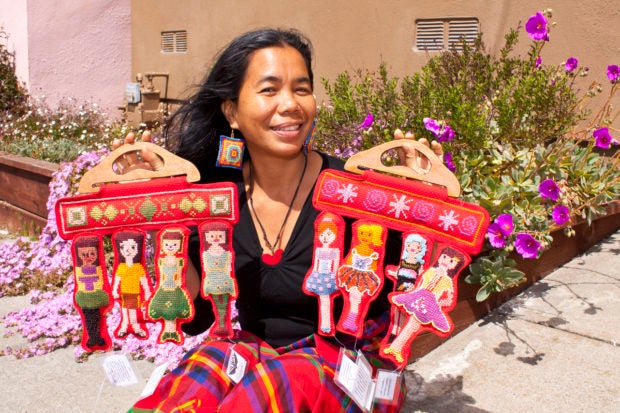 SAN FRANCISCO – After a stint in New York, a traveling exhibition known as Hilway Art Products–created and handcrafted by women behind bars in Iloilo, Philippines–has made its way to California. It was exhibited at Bindlestiff Studio from May 4 to June 7 and will be on display at the Bayanihan Community Center on June 15, 16, and 17 as part of the 2018 Dialogue in the Diaspora event and performance presented by Kularts.

“I curated it through a thematic process that enables us to bring this together into one particular art series that speaks of their own narrative and experiences, and also to express themselves and regain themselves,” says Rosalie Zerrudo, project director, curator, and concept designer of HilwayArt Products.

“Being able to build bits and pieces of themselves by making beautiful embroidery, beadwork, and putting colors into their life. This is also activating the light inside them; giving these women the space to see what is bigger than what they see in themselves,” Zerrudo adds.

A self-professed Mindanaoan—having lived in the country’s southernmost island of Mindanao for 20 years—but an Ilongga by heart whose bloodline hails from the municipalities of Lambunao and Anilao, Iloilo province, in the island of Panay, Zerrudo is someone who can be called a renaissance woman. She is a multimedia artist who works in visual arts, film, and theater, a cultural worker, a community-teaching artist, and assistant professor at the College of Fine Arts and Humanities at University of San Agustin in Iloilo.

“Living in the Philippines is a complete workshop. The multicultural island archipelago celebrates the diversity of people,” says Zerrudo. “In the past twenty years, I worked with civil service organizations as development cultural worker, researcher, program creative director and outdoor and team building facilitator.”

Zerrudo studied psychology as an undergraduate, which “paved the way to a soul work of people-centered, life-changing engagements with the community and its dysfunctions.”

Her years of creative cultural engagement earned her a fellowship grant from Ford International Fellowship Program with a full scholarship for an MA in Educational Theater for Colleges and Communities at New York University.

Zerrudo did her professorial research entitled Freedom in Prison: Prison in Freedom in the context of the transformative and healing power of storytelling and art making.

“This Freedom in prison: Prison in Freedom is an arts-based research project that attempts to find answers to questions through a multi-disciplinary platform: What is the prison culture for women? How can art impact the lives of women in prison? What is the role of prison in education? What is mothering behind bars?” says Zerrudo.

She says further: “It proactively engages with incarcerated women within the context of psycho-social support.  Women in prison exercise their own sense of freedom navigating in a tight small crowded place by creating Hilway Art Products. Women recreate a new self with new colors to light up their life in the darkest times. ​Art brings back their enthusiasm and the courage to regain one self.”

Across the street from University of San Agustin is the Iloilo City District Jail where women are locked up in what is known as the Female Dormitory—a judicial purgatory for prosecuted women on trial where conviction would mean being moved to another facility to serve a sentence. Many inmates have spent years inside awaiting a verdict and only few are acquitted. 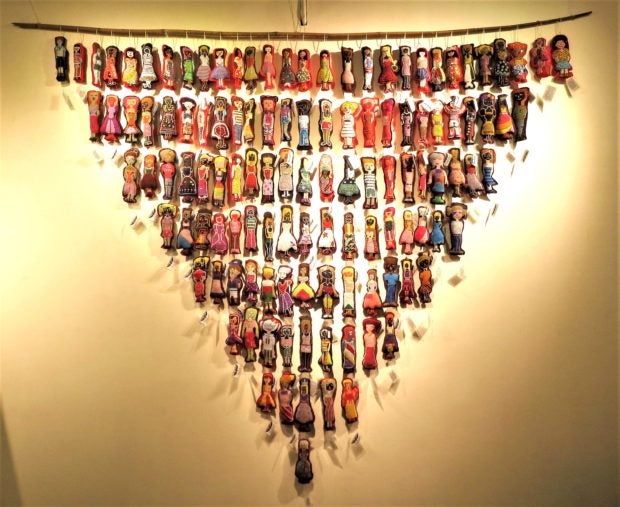 “When I found out that there was a facility for women across the university, I did an ocular visit. I was surprised when I saw the crowded women there,” says Zerrudo.

Up to 91% of these women are in jail for drug-related cases. Many of them just happened to be in the wrong place at the wrong time. Since the Duterte administration’s war on drugs, prosecutions through buy-bust operations skyrocketed the jail’s population to overcrowded proportions. More than 225 women are forced to live under harsh conditions in a tight space meant for 30 people.

“Based on international standards, they are already on a 700% congestion rate,” says Zerrudo. “To live with these women in this condition for years is an unthinkable human situation.”

Zerrudo offered the idea of conducting workshops with the inmates there.

“They welcomed the idea of doing workshops,” says Zerrudo. “I thought it could be a very creative outreach program along with my fine arts students.”

She spoke to the director of the facility, presented a formal letter of proposal, signed an agreement, and obtained a certification from the warden.

“I also did my inform consent form; so the women understood that this is voluntary, with all my provisions, and what the research is all about. I discussed it with them,” says Zerrudo. “I asked the women if they wanted to engage in some workshops, and they said yes. They’re happy to be a part of it.”

Zerrudo provided all the materials used in the workshops through funds she raised through her professorial research project from the university and the National Commission for Culture and the Arts, Philippines, YSEALI Seeds for the Future by the US Mission to the ASEAN (Young South East Asian Leaders Initiative), and Philippine Airlines (PAL) Foundation.

Zerrudo’sbrainchild and ongoing project began in 2015 with her research and workshops at the Female Dorm of the city jail along with her students under the Fine Arts Major Organization (FAMO) of the university. The result is Hilway Art Products—embroidered and beaded tapestries, pillowcases, earrings, necklaces, bracelets, bag charms, door charms, hanging décor, and soft sculptures known as Inday Dolls for sale.

“Hilway Art Productsis the result of more than a​two-year process of collaborating with more than 200 women in Prison,” says Zerrudo.

Hilwayis a Hiligaynon word that means free. But for Zerrudo it is a different kind of freedom.

This kind of freedom through art-making and the telling of stories is also a process of self-reclamation and redemption.

“To give them back their humanity and their dignity; to feel this kind of power to regain themselves and redeem themselves. Sewing is a very healing process of creating, of mending your ‘wounds’.” says Zerrudo. “I ask them questions, and they answer by making these art objects which is only coming from this place.”

Highlights of this exhibition are the Inday Dolls—soft sculptures of intricate beadwork that are iconic symbols and visual narratives.

“It’s like sculpting your emotions. Being able to make their feelings, thoughts, and ideas visible,” says Zerrudo.

Indayis a female term of endearment native to the Ilonggos. In the context of the project, it also connotes mothering, as many of the women are mothering behind bars.

“I found out that the women were breadwinners and that they still continue to earn money inside through cleaning, washing clothes, doing massage, etc.,” says Zerrudo. “They give the money to their children for school allowances.”

Zerrudo was inspired to raise funds to help the women earn an income.

“My agenda is that they are able to buy their own materials and sell their own products, to be able to raise the funds that can continue to support the project.” 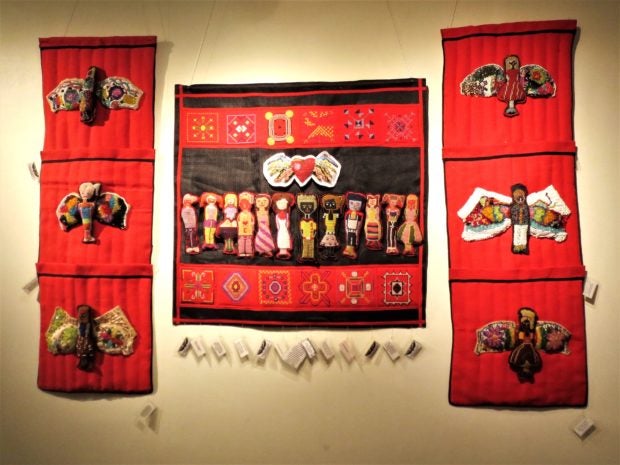 Wall decor with Inday Dolls and angels with wings made from beaded brassieres. CONTRIBUTED

Each doll has a laminated tag that bears the narratives of the women that created them.

“This is their way of saying ‘I am actually visible, I have purpose, I have value as a person, I am a woman, I have a voice, I have a place on this Earth’.”

Along with having the Inday Dollson display and being a panelist at the 2018 Dialogue in the Diaspora event, Zerrudo will also be performing her theatrical art piece PDL 700% on Friday, June 15.

PDL 700%is Zerrudo’s performance research project where she examined archetypes of the woman embodied by the women inmates by looking at how they express their narratives. Performed at Iloilo City Jail and the 2016 Iloilo Theater Festival, the piece is inspired by real stories of the women in jail.

“For this particular version of the piece, I chose four specific characters based on the archetypes of the lover, the mother and believer, the traveler, and the woman born in drug trade,” says Zerrudo. “I tell their stories and become them in the context of telling their stories.”

The women in jail are officially known as Persons Deprived of Liberty (PDL) with 700% indicating the congestion rate of their population. Zerrudo uses the artwork of the women as part of the performance with live music by Bay Area based musicians Joshua Icban and Aimee Amparo.

Proceeds from the performance and sales of Inday Dolls are for the benefit of the women in prison. Zerrudo saw the potential in these women and could use all the help and support that she can get in order to keep the project going.

“There is so much potential in the worst scenario like prison. You can never underestimate how much potential there is in these women,” says Zerrudo.

“It is humbling to experience their humanity; that we are able to actually connect to each other through our pains, but we are also able to rise together. They realize, ‘oh we’re artists! Now we know what is to be an artist, that is actually coming from the heart’. The best part is they earn from it. They’re able to earn descent income and support their family in a very creative way.”

For information about the 2018 Dialogue in the Diaspora and PDL 700% performance, visit: