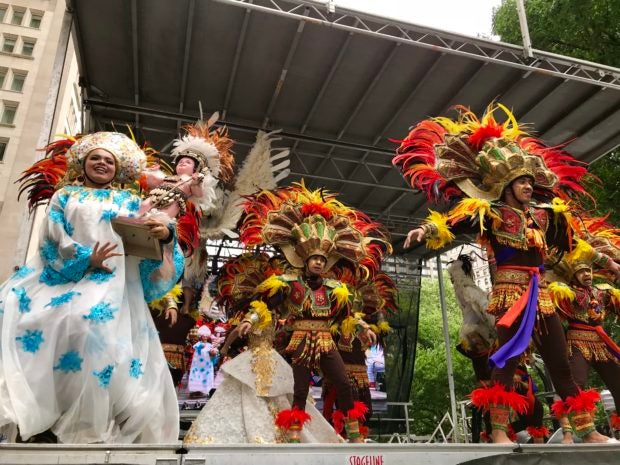 NEW YORK—When Alexa Jules Javines learned that 12 of her schoolmates didn’t pass the visa interview for their trip to New York, she was devastated but remained hopeful.

“I prayed hard for all of us to be granted with a visa,” Javines, a 17-year-old high school student of the University of Iloilo told INQUIRER.net in an interview after their performance at the 120th Philippine Independence celebration in New York. “I don’t think our trip would be this memorable if half of us didn’t make it.”

Javines was among the 55 Ilonggo high school students and a few alumni who flew in from Western Visayas to participate in the annual Filipino pride parade last Sunday, June 3 on Madison Avenue.

Twenty six were dancers for the popular “Dinagyang Festival” of Iloilo City and 29 from the “Manggahan Festival” of the island province of Guimaras—two of the cultural performances featured by the Philippine Independence Day Council (PIDCI), the umbrella organization of Filipino American organizations in the tri-state area that has produced the event for 28 years now. 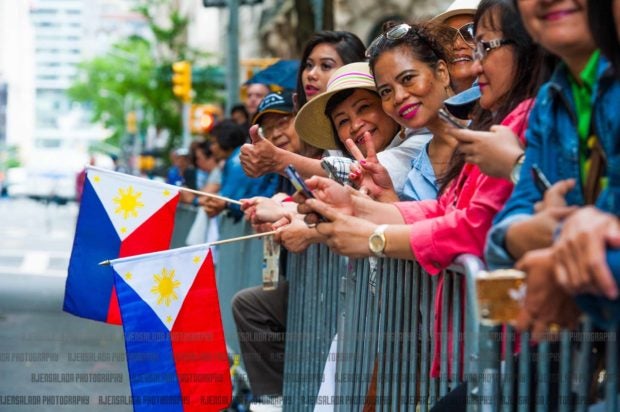 Joji Jalandoni, former PIDCI president and a proud Ilonggo nurse who has been bringing the kids to New York since 2011, revealed that some members of the group had to reapply for their visas as their street performance requires a good number of participants.

It’s a huge number of people to transport, house and feed but the local governments of Iloilo City and Guimaras province were able to get enough support so that the Dinagyang “warriors” and Manggahan cultural dancers could experience FilAm hospitality.

“I can’t thank the organizers enough for taking good care of all of us,” said Javines, who had never been outside of the Philippines. “From the food to accommodations… we were treated like VIPs, they made us feel so welcome.”

Beaming with pride, Jalandoni told INQUIRER.net that she would never get tired of helping the community preserve the Filipino culture. 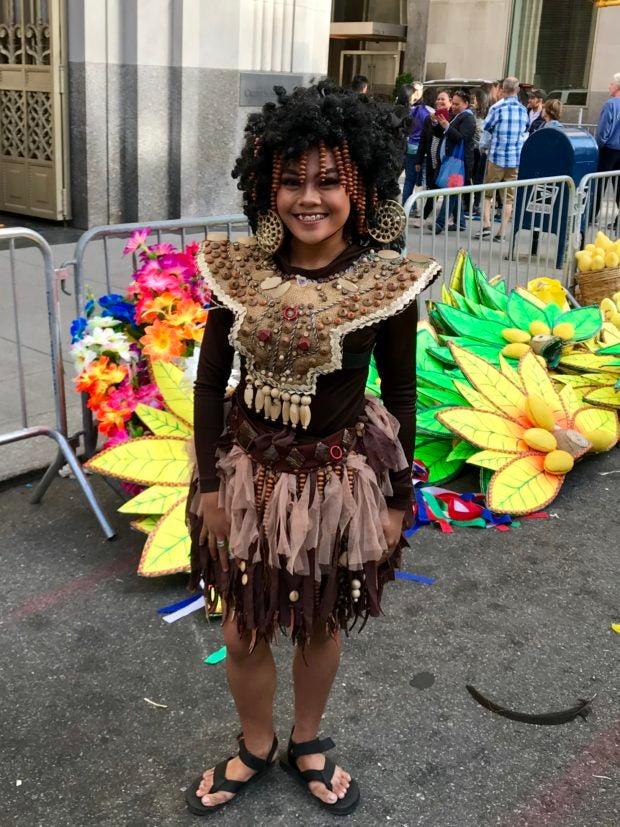 Alexa Javines was among the 55 Ilonggo high school students who flew in from Western Visayas to participate in the annual Filipino pride parade. INQUIRER/Elton Lugay

“I am just so lucky that my family is very understanding of my advocacy,” she said. “Half of my time was devoted to these kids in Iloilo the past few months and I am just so proud that all of them, despite hiccups and hurdles along the way, made it to New York.”

Jalandoni explained that her kids inspire such efforts. “I want to show my kids that we need to keep our heritage alive so that the future generation will have something to look back to and appreciate. Without our roots, we would be nothing. That’s why we need this annual celebration of Philippine independence, and what better source of pride than engaging our Filipino youth in the Philippines,” she said. 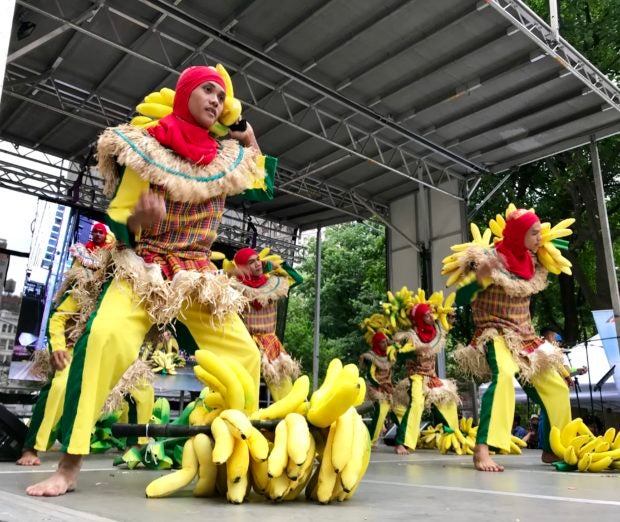 Performers from the “Manggahan Festival” of the island province of Guimaras. INQUIRER/Elton Lugay

Consul Arman Talbo of the Philippine Consulate General in New York couldn’t agree more. “It is always a source of pride and inspiration seeing thousands of our kababayans marching, dancing, chanting and waiving the Philippine flag down Madison Avenue. This is an Independence Day Parade like no other where we don’t only showcase the beauty of our culture and richness of our cuisine but highlight our unity as a community as well,” he told INQUIRER.net. 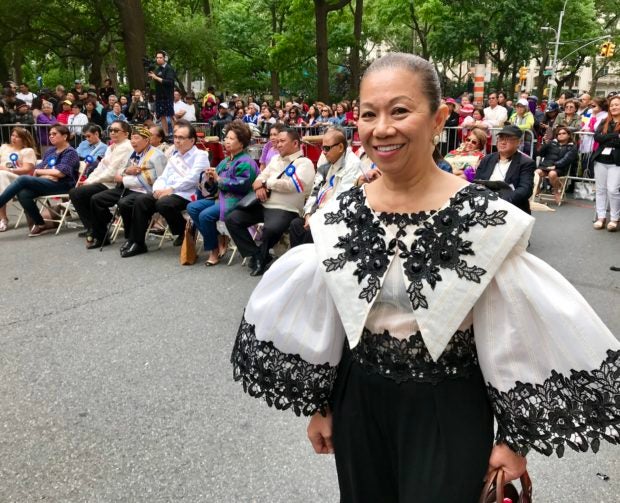 Joji Jalandoni, former PIDCI president, revealed that some members of the group had to reapply for their visas as their street performance requires a good number of participants. INQUIRER/Elton Lugay

Incoming N.Y. Consul General Claro Cristobal said the pride of Fil-Ams in their Filipino roots is a source of inspiration, and thanked the community for its unfailing dedication. “The Philippines deeply values their contributions as they support their families back home and share in our noble task of nation-building,” he said.

“I wish to convey the greetings of [Foreign Affairs] Secretary Cayetano and convey his congratulations to our kababayans in New York for organizing and participating in this annual event, which not only highlights our culture and identity as a nation but serves as a shining manifestation of our unity and creativity as a people,” he added in his event message.

Mario de Leon, former N.Y. consul general and this year’s honorary parade grand marshal, was delighted to see many FilAms from all over northeastern U.S. come in droves last June 3 for the 2018 Philippine Independence Day Parade. 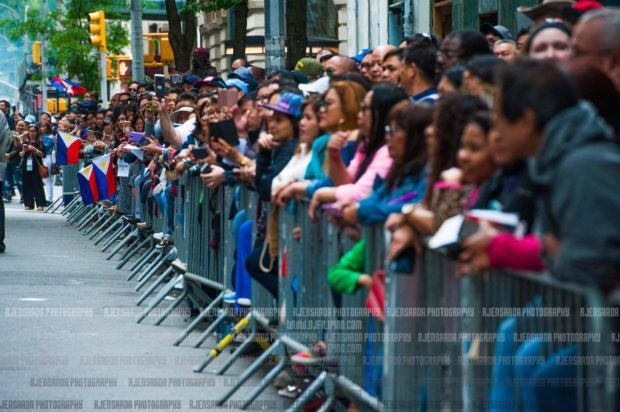 “[It] is a clear manifestation that despite some challenges and differences, Filipinos are patriotic, proud and one in raising their flag on their national day and uplifting their profile in the heart of mainstream America—New York City,” he said in a statement sent to INQUIRER.net.

The parade was attended by Filipino dignitaries, community leaders and organizations, and Duterte loyalists. A street fair was set up at Madison Square Park where the cultural show was also staged. Performers included local and visiting talents from Manila and other states. Filipino indigenous products like native hats, fans and clothing were popular items at the street fair, but the longest lines were for the Pinoy barbecue.

“Our kababayans in the U.S. Northeast, let us continue to unite and work together in pushing forward genuine reforms and sustainable development for the Philippines in support of the programs of the Philippine government. The more than 350,000 strong Filipino American community in your area is a vital force as we join hands in forging a brighter and more progressive future for our country,” Romualdez said. 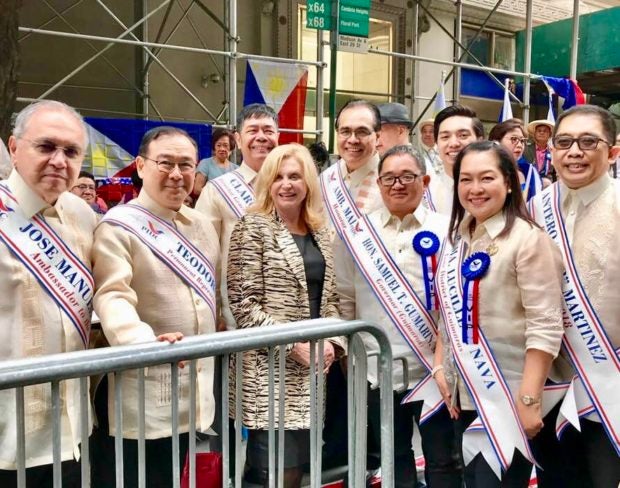 It was some sort of vindication for PIDCI president Ner Martinez, whose leadership has been challenged since taking office last year. Just days before the event, the Supreme Court of the State of New York dismissed a case against PIDCI that would have prevented the staging of the community celebration.

“I am so happy with the outcome of Sunday’s festivities,” Martinez told INQUIRER.net. “It started off with an inspiring flag raising, then a spiritually uplifting mass, then a spectacular parade and jampacked street festival and capped by a cultural festival that was a showcase of top-class talent. Our invited guests Dinagyang from Iloilo, Manggahan from Guimaras, Leo Martinez and Geneva Cruz certainly added zest and flavor to the festivities. I am so blessed with the support and dedication of the PIDCI officers, directors, sponsors and volunteers.”