The Kiss of Duterte

The Kiss of Duterte 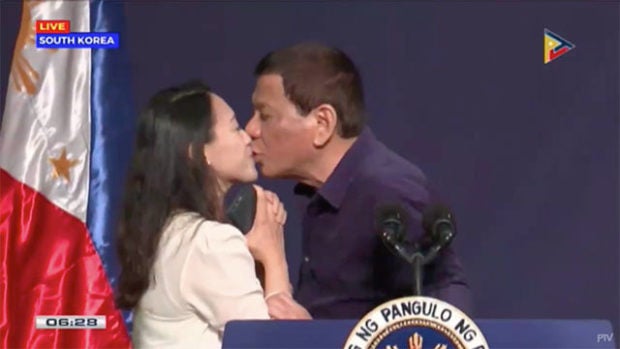 While the #babae ako hashtag is still making the rounds in social media in response to President Rodrigo Duterte’s misogyny, it seems that for the next four years, we women must steel ourselves as the object of his twisted jokes.

He cannot control his urges anymore. Predatory urges, I would say. They follow a pattern. First, he demeans women who openly criticize him – De Lima, Callamard, Sister Fox, and IMF Chief Lagarde whom he wished to corner and kiss.

On June 3, while on a state visit to South Korea, Duterte finally did the twisted act he wished to do with Ms. Lagarde. He kissed a married woman on the lips in front of millions of viewers. He did it in front of the Presidential seal, the Philippine flag, with the Presidential Security Guard were everywhere. The Filipinos cheered Duterte sealing his kind of presidency with a kiss.

For Duterte’s supporters, it was a “fatherly gesture.” Besides, the woman “consented.” It was only for entertainment, thus not to be taken seriously. But it was abuse of power.

I was in daze. This is the new normal, the norm that our children must accept as long as Duterte is in power.

If you were the husband would you allow someone to kiss your wife on the lips in front of the millions of viewers? As a woman would you like to be kissed by Duterte yourself?

During the campaign period, he joked about the rape of an Australian missionary, saying ‘dapat mauna si Mayor’. He was then the Mayor of Davao City. Despite these, he became the President.

It was his gutter language, macho talk, and of women as sources of entertainment that catapulted him into power. We all love entertainment. We love Duterte. We are calling him “Tatay” because he is fatherly in all aspects – stern, a disciplinarian, tough-talking, and knows our funny bone. He is never wrong because according to Duterte fans, “No one is perfect.”

Duterte’s followers won’t acknowledge he fact that the presidency is the highest position in the land and whoever is in power represents the Filipino people to the world. But not everyone approves of his disrespectful antics.

To Joe Angeles, a Filipino married to a Thai, the thunderous applause and cheers the kiss drew from the audience was unsettling.

“Their cheers made me conclude that his supporters have become enablers of the misogynistic behavior of this pervert president, which is even more disgusting.”

Andy Tiver, a migrant from Australia says,“No one wants a political leader incapable of showing affection, but the Duterte kiss is not about affection. It was publically inappropriate, opportunist, abusive, and degrading.”

But what can a man do? “Do?I think I would be powerless to do anything. That is exactly what makes it so inappropriate,” Tiver admits.

Angeles would see himself as a mentally and emotionally tortured husband if the woman were his wife.

Tristan Viktor Santos, a medical student, feels that Duterte is “nakakalalaki” (insultingly macho). “If I were the woman, I would lose my sense of dignity. Binastos ni Duterte ang pagkatao at pagkababae ko (Duterte demeaned by femininity, my humanity).”

Jenny Phiannonlao, a Filipina married to a Thai national and an avid Duterte admirer, is aghast.

“I was having breakfast when I saw it. Until now, the food blocks my throat,” she says. Although she admires Duterte, she feels that the act was inappropriate.

“Hug is okay. Kissing in public is not. It’s not a joke. Who knows what happened backstage?”

As the Filipinos fill social media with #babaeakohashtag, Duterte remains his usual self – an undaunted, foul-mouthed braggart. He remains in power because there are millions who enable him to become abusive. I hope it ends soon.

#Babaeako, I denounce his misogyny.

#Babaeako, I demand his respect.

#Babaeako, I will fight all forms of abuses from anybody including the President.