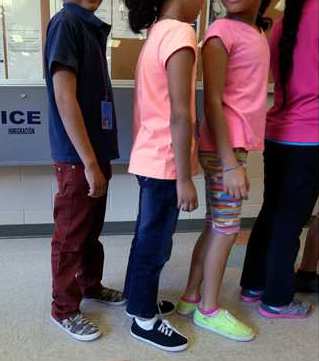 One thousand four hundred seventy-five (1,475) out of the 7,635 unaccompanied immigrant children were reported unaccounted (lost track of) during the last quarter of 2017.  These children were placed in an Office of the Refugee Resettlement (ORR) shelter by the federal government.

The majority of such children are sent to live with sponsors who have close ties with them — typically a parent or close relative. Some, however, end up living with “other-than-close relatives,” or non-relatives, according to Steven Wagner, a top official with the Department of Health and Human Services (HHS).

The children are not lost, according to the HHS Deputy Secretary Eric Horgan, just can’t be reached.

Deputy Horgan is likely speaking in a bureaucratic sense, seemingly negating the consequences of the adverse effectof parental separation on children.

There is such thing as “separation anxiety,” the normal alarm or fear experienced by a young child separated from the persons or caregivers to whom a child is attached, particularly parents. Separation anxiety is most active among children between 6 and 10 months old. However, separation from loved ones in later years may elicit similar anxiety.

Separation anxiety disorderaccording to the American Psychiatric Association’s (APA) bible-of-mental-disorder or the Diagnostic Statistical Manual(DSM-IV-TR) is characterized by developmentally inappropriate, persistent, and excessive anxiety about separation from the home or from major attachment figures.

Some of the pronounced symptoms may be fear of being alone or going to sleep without the major attachment figures, separation-related nightmares, and repeated complaints of physical symptoms (e.g., vomiting, nausea, headaches, stomachaches). These symptoms cause clinically significant distress or impairment in functioning. 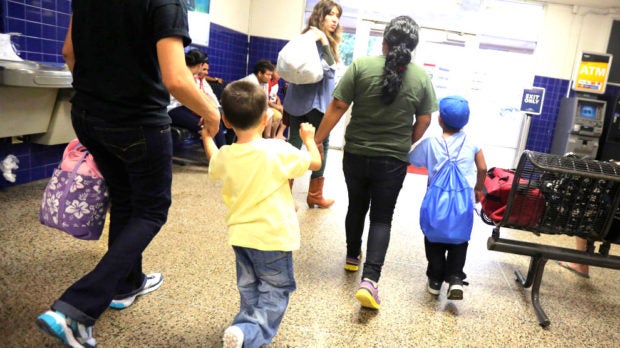 In this July 7, 2015, file photo, immigrants from El Salvador who entered the country illegally walk through a bus after they were released from a family detention center in San Antonio, Texas. The vast majority of immigrant children who arrive alone at the U.S. border are placed by the government with adults who are in the country illegally, federal data reviewed by The Associated Press show. AP PHOTO

Apparently, these “separated” children are already entangled in ponderous strife; moreover they are also stilldevelopingbeings who are in a unique, often precarious, relatively short phase of human development within a delicately prescribed timeframe.

Any disruption (bureaucratic, physical or mental) during this phase, like imposed or “lawful” familial separations, would have adverse consequences manifested later in life. No one can reverse time to rectify the effect(s) of a prior-disrupted phase on their bio-psycho-socio development, unless through a sound psychosocial rehabilitative intervention or therapy.

Bureaucratic to neural to DNA

Adverse Childhood Experiences(ACEs) was coined by physicians Vincent Felitti and Robert Anda to encompass the chronic, unpredictable, and stress-inducing events that some children face. Doctors Felitti and Anday studied the histories of 17,000 youths in 1995.

The results were shocking: Nearly two thirds of children had encountered one or more ACEs, such as growing up with a depressed or alcoholic parent; losing a parent to divorce or other causes (e.g., separation); or enduring chronic humiliation, emotional neglect, or sexual or physical abuse. These forms of emotional trauma went beyond the typical, everyday challenges of growing up, according to Felitti and Anda.

Other studies reveal that experiencing chronic, unpredictable toxic stress during childhood predisposes children to a constellation of chronic conditions in adulthood.  These adversities are now recognized as more far more prevalent than researchers had imagined, according to Dr.  Janice Kiecolt-Glaser of Ohio State University College of Medicine.

How do childhood chronic adversities or stresses get under the skin way to affect risk of later physical and behavioral ailments in adolescence to adulthood?

Today, according to Donna Jackson Nakazawa, author of The Autoimmune Epidemic and the Last Best Cure, in labs across the country, neuroscientists are peering into the once inscrutable brain-body connection, and breaking down, on a biochemical level, exactly how the stress we face as children catches up with us when we are adults, altering our bodies, our cells, and even our DNA.

We are forewarned that contemporary scientific findings can be a little overwhelming to contemplate.

Studies, for instance, show that when the developing brain is chronicallystressed, it releases a hormone that actually shrinks the size of the hippocampus, an area of the brain responsible of processing emotion and memory and managing stress (per reveal by recent magnetic resonance imaging (MRI) results).

MRI studies also suggest that the higher an individual’s ACE Score, the less gray matter an individual has in other key areas of the brain, including the prefrontal cortex, which is related to decision-making and self-regulatory skills, and the amygdala or fear-processing center.

Ryan Herringa, neuropsychiatrist and assistant professor of child and adolescent psychiatry at the University of Wisconsin, reports that children whose brains have been changed by their Adverse Childhood Experiences are more likely to become adults who find themselves over-reacting to even minor stressors.

The deduction by these studies suggest that children who come into adolescence with a history of adversity and lack the presence of a consistent, loving adult to help them through it may become more likely to develop mood disorders or have poorexecutive functioning and decision-making skills.

Thus, their cognitive and moral reasoning capabilities are simply riled and compromised.

Any “bureaucrat” need not have the brain of a rocket scientist to recognize that this could be one possible,potential and lethal root of contemporary school violence?  This is basic psychology, an understanding of which some creators-of-man’s-law seem to lack.

Moreover, we are reminded that 29% of the Deferred Action for Childhood Arrivals or DACA recipients are in ages 16 to 20 and 365,000 are high school students across the United States.

Dr. Aggie Carson-Arenas is a Certified Clinical Psychology Specialist, and a former university research director. He is a Behavior Analyst Specialist in Nevada, an educator, clinician, researcher, consultant and a published author. (Parts of this piece are excerpts from the book, UNDERSTANDING SELF [Pag-unawa Sa Sarili]: THROUGH THE EYES OF ADOLESCENCE co-authored by his daughter Abbygale Arenas-de Leon to be published as a textbook/workbook in the Philippines this year, and the generic version, “Adolescence Power: 12 Verbs Adolescents, Parents and Professionals Need to KnowUnderstanding the Forces Behind,” in the U.S. Please e-mail at: [email protected]