A Filipino gastronomic tour of Brooklyn

A Filipino gastronomic tour of Brooklyn 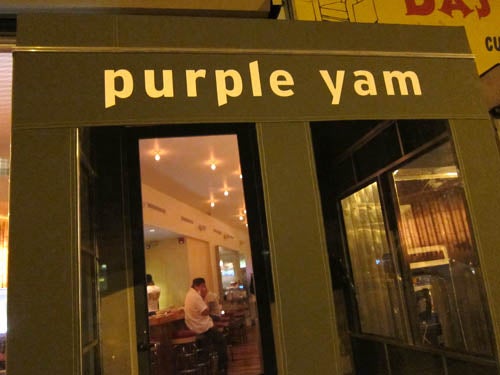 NEW YORK –When Purple Yam opened in the Ditmas Park neighborhood of Brooklyn back in 2009, it became a dining destination for many Filipinos and Filipino Americans who live outside the borough. Some prefer to drive while others take the leisurely route via the Q train going to Coney Island.

One by one, Filipino restaurants followed suit, and less than decade later, we have a strong list of places in Brooklyn where foodies and admirers of Filipino cuisine could gather and share a steaming pot of chicken adobo while drinking their San Miguel Beer.

Some of them – like Tama in Bed-Stuy and Ibis Eats in Crown Heights – are targeting their respective neighborhoods in order to become the go-to spot among its residents. Tama opened a year ago along Lewis Street in the Bedford-Stuyvesant area, still a predominantly lower-income neighborhood on the verge of imminent gentrification.

Just a little more than a mile away is Swell Dive, a non-traditional taqueria serving Filipino flavors. Owned by the husband and wife team Dennis Mendoza and Autumn Stanford (they also own Brooklyn Kolache Co.) Swell Dive opened in 2016 and they have been serving chicken adobo, spam and sisig tacos, among others since. The idea of opening a Filipino Tex-Mex spot has been at the back of his mind since opening Brooklyn Kolache back in 2012 and they were just waiting for the right time. The couple got inspiration from their own backgrounds, Stanford traces hers to Texas while Mendoza’s roots are from the Philippines.

Ibis Eats on the other hand started off as a café which Bjorn dela Cruz opened with a Trinidadian partner five years before he and his siblings started Manila Social Club.

They’re offering some traditional, authentic-style Filipino food, and they’re going this direction because of the neighborhood.

“They don’t know about Filipino cuisine [here] so when I opened in Williamsburg for Manila Social Club, we had avant-garde, cutting edge Filipino food. Here now in Crown Heights, it is a great place because it’s a blank space where I can show them the real strengths of our tradition,” dela Cruz shared.

They are also exploring Filipino food as it pertains to the Galleon Trade, Spanish influence and incorporating Trinidadian and Caribbean influence.

“There are some dishes – when we were making the menu, like laing – and my partner would go, ‘This is like my grandma’s dish and it’s called callaloo!’” he added.  “For a staff meal once, I made some afritada and he asked me how I learned to make it because he never learned how to make it. I told him it’s as Filipino as it gets.”

For two evenings last week, I had an opportunity to dine at Purple Yam with chef Romy Dorotan in the kitchen and serving us great-tasting food.

The first night was a dinner with some colleagues and Tourism Attaché Susan del Mundo as part of the Filipino Restaurant Week. The plan was take eat our dinner first at Tama and drive to Purple Yam for dessert.

We ate our way through Tama’s menu and found amazing and bold flavors in their dishes. My favorite remains to be the smoked mackerel over spicy chocolate rice (it’s like champorado but different). The sisig burger and sisig fried rice were both delightfully delicious. 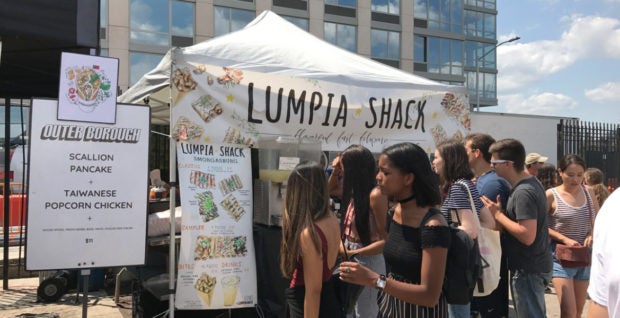 Since we eat with our eyes first, we couldn’t help but be appreciative of Tama’s decision to use ube bun – it was indeed Instagram-friendly. Notable among what we tried were the Bicol Express and Lengwa (beef tongue served with smoked mushrooms).

We tried not to be so full since we knew our desserts were waiting.

At Purple Yam, we had one dessert each, which we shared with the group so we could decide which one was the best. When chef Romy arrived while we were dining, he went straight to the kitchen and next thing we knew, he was sending out some appetizers. How could we say no?

We had a light salad of apple and mango with mulberry vinegar from Bukidnon, followed by kinagang, a Bicolano dish similar to tamales, made with cassava and coconut and served with squid. Then came the jackfruit dish with four kinds of toasted cheese.

Chef Romy makes his own ice cream and tonight, we had the best time eating some of his rather uncanny concoctions. Ever heard of sineguelas ice cream? How about champoy ice cream? We had both and we craved for more.

The sineguelas (ciruela in Spanish) ice cream brought me back to those childhood summers in the province where we would feast on sineguelas picked straight from the tree with a sarukang, a long pole of light bamboo. Romy said he bought the frozen ciruelas from a neighborhood store.  He served it with suman diket (sticky rice).

Then came a parade – a plate of mango ice cream served over a mango tart, gojiberry ice cream with longan, calamansi tart served with a scoop of guava sorbet a d my personal favorite, the ube tikoy served with champoy ice cream.

Chef Romy and Amy Besa should open a place that only serves desserts, or maybe an ice cream shop.

NYC foodies look forward to the month of April because this is when Smorgasburg, the largest weekly open-air food market in the country opens.

Now a Brooklyn institution, Smorgasburg gathers about a hundred of the city’s main food purveyors and local vendors and brings them to East River State Park in Williamsburg on Saturdays and Prospect Park on Sundays. Between 20,000 to 30,000 people make the trip to Brooklyn every weekend to try the multiple options that the vendors have to offer. 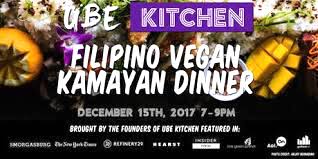 Chef Neil Syham and his Lumpia Shack, a non-traditional lumpia stand, have been fixtures at Smorgasburg since 2012. Two years later, they opened their brick and mortar store in the West Village, part of chef Neil’s dream to create a fast casual, upscale Filipino eatery in NYC.

Early this year however, he announced that they are closing the restaurant down and he will be focusing on a partnership with fellow chef Carson Yiu for their venture called OKLah in Flushing.

They became viral social media sensations after foodie features from Food Insider, VICE, New York Times, OZY, Gothamist, and Refinery29 with each one bringing a different way to understand the purple dragon concept.

“While one of us is a plant-based fanatic and the other a Filipino-trained chef, we wanted a way to pay homage to the Filipino culture and create a vessel to celebrate the use of plant-based ingredients in a dessert with no dairy or animal products,” Vanz Consignado told the Asian Journal.

“Inspired by halo-halo, our purple dragon is filled with colors and unexpected flavors such as dehydrated pineapple and dragon fruit to have fun with plant-based cuisine at a time plant-based foods is reaching critical mass. When someone sees a purple ball in the shell of a dragon fruit, how else can you not say, ‘what the hell is that?’ and not try a taste.”

Vanz was born and raised in the Philippines and graduated culinary arts from De La Salle – College of Saint Benilde. He later went on to work at the 5-star Gran Hotel La Florida in Barcelona, Spain and at the Delano botique hotel in South Beach, Miami. His partner Nick is from Rochester, NY, a business administration graduate with wide-range of experience at food banks, clinical research, and freelance web design that eventually led him into the digital publishing world for  OZY.com before taking his marketing talents to Ube Kitchen.

They knew as early as the summer of 2016 that they would create a dessert together and invested to not just experimenting but conceptualizing the business model and taking the time to browse how an outdoor tent operates. They also felt there was enough of the rise of ube and Filipino flavors and plant-based options in New York to propose a Filipino-inspired dessert to an outdoor market that thrived on the latest and unique dishes.

They saw an opportunity and ran away with it. Now, they are offering more than just the halo-halo served on dragon fruit.

Ube Kitchen serves the “rainbow of colors in plants and unafraid to experiment in our Ube Lab testing with plant-based dishes for chia pudding, pizza, mac-n-cheese, cupcakes, musubi, homemade seitan, hot chocolate, matcha drinks, and everything you can imagine plant-based at a ‘kamayan’ feast”.

And after munching and snacking at Smorgasburg, one can make the little-over-a-mile walk to Mountain Province and enjoy their selection of ethically-sourced, fair trade coffee beans sourced exclusively from the Philippines through Kalsada Coffee, a roaster that works with small independent coffee farmers in the Philippines.

And speaking of ube, their ube latte is sublime and I can trek all the way to East Williamsburg just to have a cup or two. While at it, I’d be having their Filipino pastries – cassava cake and ube ensaymada – as well, thank you very much.

Owner Ray Luna opened Mountain Province in 2013 with his lola, the matriarch of his family, as the main inspiration.

He told Gothamist then, “My grandmother was able to provide and send six kids to school by baking cakes for the neighborhood. Soon after, my mom and my aunt followed in her footsteps in one form or another. So, in a way, our tiny shop is a celebration of her legacy and the legacy of my family.”