Lessons from ‘Buwan at Baril’ 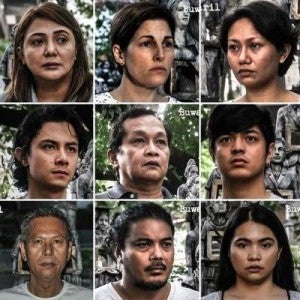 The cast of Buwan at Baril. CONTRIBUTED

Buwan at Baril is an old story, a play about people and events from 30 years ago.

But it is striking how this tale of eight people struggling to find their place in the fight against tyranny has become relevant today.

The reason becomes clear as we reel from disturbing trends in the Philippines and the United States.

In the first, a fascist president unleashed a wave of violence that has killed more than 6,000 people. In the latter, a chief executive kicked off a new administration with a rash of mean-spirited policies aimed at immigrants, Muslims and other minorities.

In both countries, people are resisting.

They’re fighting back, the same way Filipinos fought back three decades ago during the dark years of the Marcos dictatorship.

Buwan at Baril, written by Chris Millado, is an exploration of that struggle, a meditation on how the Marcos tyranny brought people from different backgrounds together in a common journey, a common fight.

And they are, to be sure, very different people: the socialite who finds herself drawn to the burgis protests following the Aquino assassination; the farmer and his brother, the factory worker, at a proletarian protest march; the widow of a slain guerrilla leader; the priest seeking to comfort an Itawis woman who was abused by the Marcos military; the student activist trying to outsmart his interrogator, an ex-activist-turned-Manila policeman.

The fight against dictatorship was at its height when the play was first staged by the Philippine Educational Theater Association at the Rajah Sulayman Theater in Fort Santiago.

I was cast as the student activist in the 1985 production at UP Diliman, directed by Apo Chua. Film director Joel Lamangan, one the country’s most accomplished theater actors, played the role of the interrogator.

It was a memorable and powerful experience. I was part of a production that was reflecting the social upheaval that was then engulfing the country. Just a few months after that production ended, the Marcos regime collapsed.

We all know what happened next. The People Power uprising ended the dictatorship but also gave rise to a corrupt elite-dominated political order. Now, disillusionment with the post-EDSA regime has paved the way for yet another fascist ruler.

Reflecting on the new production of Buwan at Baril and my own experience as part of the 1985 cast, I recently found myself wondering: What would have happened to the characters in the play after the fall of Marcos?

United in the common cause of defying dictatorship, they most likely would have taken different paths and embraced different beliefs in the post-Marcos era.

I imagine the socialite morphing into a staunch supporter of the elitist-hacendero order endorsed by Cory Aquino. Could the farmer have been one of the peasant protesters killed in the 1987 Mendiola massacre?

Did disillusionment with the new order push his worker-brother to embrace the radical path of the underground left, perhaps together with the student activist and the widow?

Or did that UG left’s violent excesses lead them to abandon that movement and to follow a less dogmatic, more forward-looking progressive path?

And the priest who worked with oppressed peoples in the countryside, what would have happened to him? He probably would have remained involved in causes he embraced during the Marcos years, giving aid and advocating for communities abused and ignored by the powers-that-be in Manila.

I’ve met a few of them in my career as a journalist. Sister Christine Tan, the one-time Cory ally later became more critical of her administration. And more recently, there’s Father Peter Jeremia, a veteran of the anti-Marcos struggles. Last year, he came to the aid of protesting starving farmers ignored by politicians aligned with Noynoy Aquino and who were later gunned down by police in Cotabato.

The new production of Buwan at Baril is a reminder of what the country went through during the Marcos years at a time when the Marcoses, aided by Duterte, appear to be mounting a comeback.

But it is also more than that.

Fanatical Duterte supporters like to paint opponents of his government as Yellowtards, blind followers of the Aquinos. And these Yellowtards, they argue, were the same people who caused the overthrow of Duterte’s hero, Ferdinand Marcos.

Buwan at Baril offers a fuller, more complex picture. People from different classes and with different political beliefs came together to oppose the regime.

Filipinos are coming together again, building alliances and launching campaigns aimed at a common foe, an arrogant ruler who inspired a cruel campaign of violence and death.

The people joining this fight again come from different backgrounds and hold different political beliefs. They do not agree on everything, including the best ways to challenge a fascist regime.

But just like 30 years ago, they are looking beyond their differences to wage a common struggle.