“The Rise and Fall of Motherhood” a plagiarized paper, was accepted in conferences in Japan, Barcelona, Greece, Croatia, and Melbourne for 2018-2019.The acceptance letters were signed either with initials or a first name.

“I live with my mother and we have three cows and two goats. I have a niece who goes to kindergarten and she has a cat,” stated a bio attached in an abstract. It was submitted by an academic to the Teaching English to Speakers of Other Languages (TESOL) conference.

Paul Robertson, CEO of TESOL Asia, based in SITE Skills, Clark, Philippines, politely declined the in an email. The conference only accepts high-quality papers. The credibility of TESOL-Asia was tested. 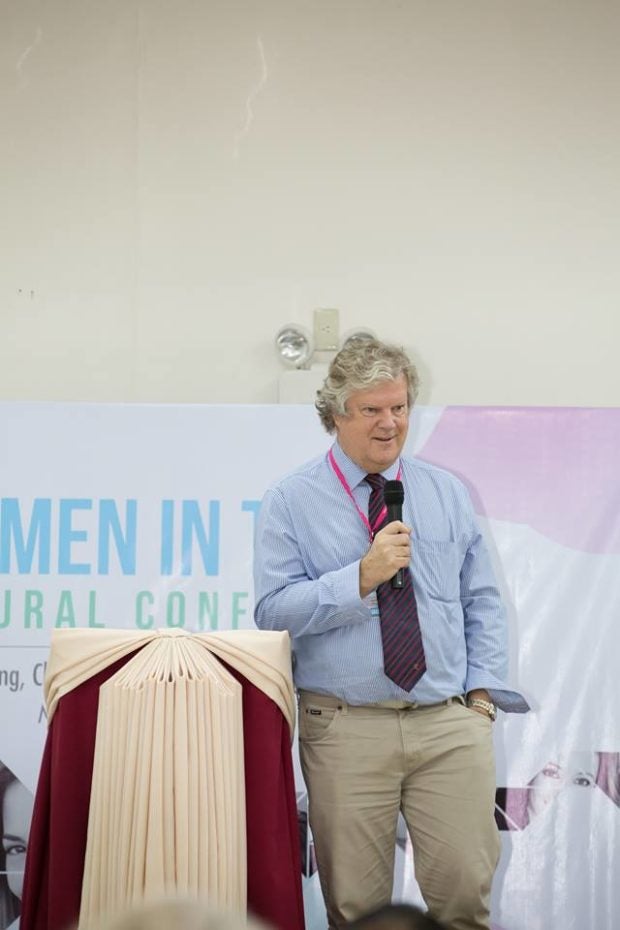 Dr. Paul Robertson, CEO of TESOL Asia, based in SITE Skills, Clark, Philippines, during the inaugural conference of Women in Tesol in 2016 at SITE, Clark, Pampanga:  Abstracts sent to fake conferences are “seldom read.” CONTRIBUTED

Robertson explains that abstracts sent to fake conferences are seldom read, while in legitimate conferences, abstracts are “double-read.” If still in doubt, he or his staff write to authors to clarify or decline.

Every day, academics and researchers get email invitations either to present research various countries, or to publish. Conference fees range from 500-300 Euros and $60 per page upon publication. Is it worth your money?

Before attending a conference check these sites: California Institute of Technology’s libguides.caltech.edu, beallslist.weebly.com, and Stop Predatory Journals (https://predatoryjournals.com/publishers/). If the conference host or journal is noton these lists, read on.

Jeffrey Beall, a former University of Colorado librarian, coined the term “predatory conference” because it is more interested in your money than to your research.

Paul Kei Matsuda, a professor at Arizona State University and director of Second Language Writing (SLW), explains that presenting at conferences and publishing with established presses in the particular field is important when it comes to academic hiring, tenure, and promotion. Tenure and promotion cases often involve external reviewers who are experts in a field. 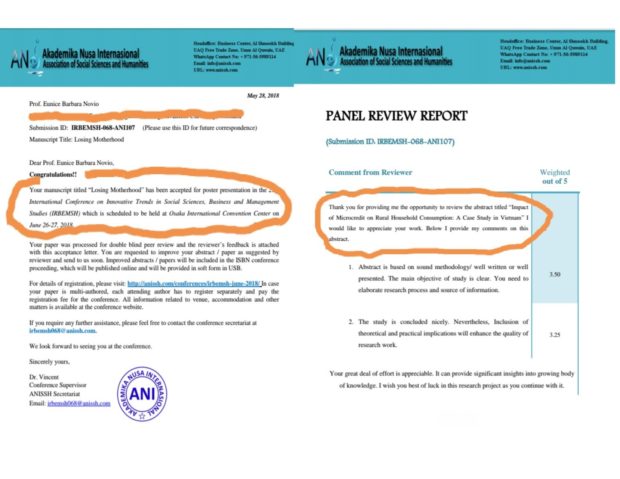 Lisandro Claudio, author and a professor at De LaSalle University, Philippines, says that each university has its own focus. Since De LaSalle focuses on research, faculty members are obliged to conduct research and get published in high-impact journals indexed in Scopus and ISI (Institute for Scientific Information).

“Authors who are published in Scopus-indexed journals get incentives as much as Php70 thousand,” Claudio says.

Scopus (https://www.scopus.com) is the largest abstract and citation database of peer-reviewed literature like scientific journals, books and conference proceedings in the fields of science, technology, medicine, social sciences, and arts and humanities.  It features smart tools to track, analyze and visualize research, its website says. 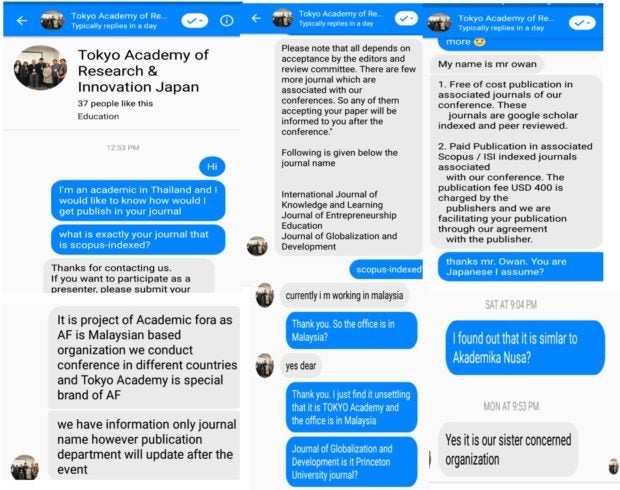 Scopus is under Elsevier, an information and analytics company which started in 1700s, and is based in Amsterdam. It indexes legitimate authors and papers.

There are over 22,000 journals from more than five thousand publishers indexed in Scopus. One can search for legitimate authors and journals on its website. Yet, many still fall prey to “predatory conferences and publications.”

Mayfel Paluga, associate professor at UP Mindanao, enumerates the reasons why academics fall prey to predation: “Faculty pressures them to present in conferences to gain points for university ranking; naivete on this modus; and even if they know its fake, they’ll take chances just to get published.”

Arthit Jiamrattanyoo, a doctoral candidate in the Department of History, University of Washington, agrees.

“These offer them opportunities to fill their profiles and fulfill their requirements determined by the increasingly bureaucratized academic systems. It’s a reciprocal relationship between academics and these academic con artists rather than a one-side deception,” says Jiamrattanyoo.

Asia-Pacific Institute for Advanced Research (APIAR), listed by Beall as “potential predatory,” held an academic conference in Bangkok on May 6, 2018. Twenty-five academics from Kazakhstan, Thailand, Philippines, and elsewhere presented their research to, well, 25 participants. 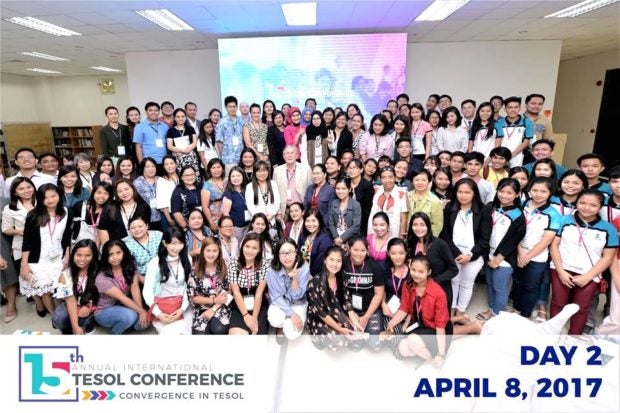 A well-attended 2017 15th TESOL Asia Conference in Clark, Pampanga with Dr. Rod Ellis, the father of Second Language Acquisition as the plenary speaker.CONTRIBUTED

In an email to INQUIRER.net, John Taylor, APIAR communications manager (he is on LinkedIn), wrote:

“Beall from USA published that list based on his ‘Freedom of Speech’ and he had to shut down his website because of the credibility. This is also important to note that he didn’t have any authority to judge other organisations.”

APIAR claims to have an office in New South Wales. But the contact numbers provided in the website were unreachable.

The plagiarized “The Rise and Fall of Motherhood” was also accepted by the following conferences: Tokyo Academy of Research and Innovation (TARIJ); Academic Fora; Akademika Nusa Internasional (ANISSH) in Emirates; International Conference on Social Science and Management (ICSSAM) of Higher Education Forum (HEF/prohef) in Taiwan; and Academic Research and Solutions in Barcelona (ACRS). Of these only HEF/prohef is on Beall’s list of “potential predatory.”

In a Facebook message, a “Mr. Owan” claimed that TARIJ is a “special brand” of Academic Fora (AF), a Malaysia-based organization.  On its Facebook page, there are a few pictures of the conference held in a small room with few participants. ANISSH has a Facebook page containing the same photos. The websites have similar layouts, a no-refund payment policy, grammatical; errors, and the absence of contact persons. Owan later claimed that they are “sister concerned organizations.”

“Predatory conferences can seriously damage the reputation of a scholar in several ways,” says Patricio Abinales, professor of Asian Studies in the University of Hawaii-Manoa. “First, you will be laughed at by your colleagues for being ‘conned.’ Worse, you may develop the reputation of someone who just attend one conference after another without concern over how to develop your specialization. It does not promote or ‘upgrade’ your academic record.” 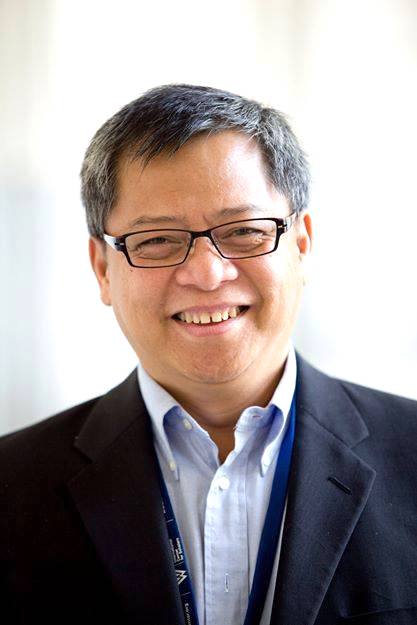 Abinales points out that conferences and workshops in particular disciplines are critical in the promotion and exchanges of new studies, reconsideration of previous studies, as well as interacting and updating of each other’s works.

A predatory conference doesn’t have priority discipline, it combines several tracks at once– humanities, technology, engineering, IT, etc.

“Papers presented there will never get published in the main journals of the discipline. This means if the faculty’s academic record hinges on publications then he or she is finished,” Abinales says. 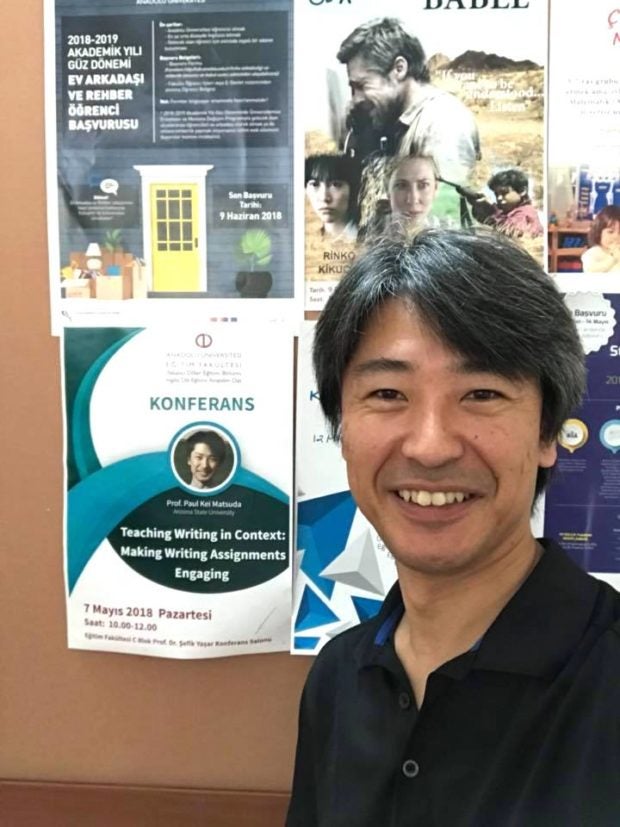 Prof. Paul Kei Matsuda the keynote speaker at a conference in Turkey at Anadolu Universitesi in May 2018: “Being able to distinguish reputable venues from questionable outlets is part of disciplinary knowledge.” CONTRIBUTED

“I guess it is more of caveat emptor (buyer beware), we can say it’s a kind of fraud but legally I don’t think [you can] unless they deceive with false promises knowing they are false. Once you sign up, you actually sign on in the assumption you have agreed to their terms,” Robertson explains.

Matsuda says: “Being able to distinguish reputable venues from questionable outlets is part of disciplinary knowledge, and sometimes it is difficult for novice scholars—or experienced scholars outside your field—to tell the difference.”