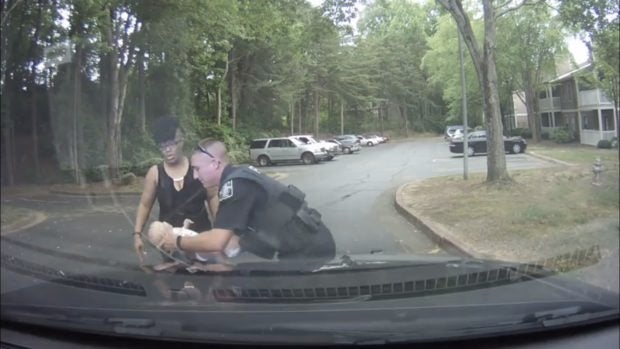 A police officer from the state of Georgia in the  US gained praise as he saved an infant from choking.

Marietta, Georgia, police officer Nick St. Onge responded to a 911 emergency call on May 15 about a 2-month-old infant who had stopped breathing.

Being the first responder on the scene, St. Onge quickly attempted to do infant CPR while waiting for medical personnel to arrive.

St. Onge’s body cam and his squad car’s dash cam captured the whole incident. The footage below was uploaded on the Marietta, Georgia, Police Facebook account on May 24. The baby’s grandmother, Kianna Dorsey, can be seen nervously pacing back and forth as St. Onge crouches in front of his squad car while attempting to revive the infant.

“She only had a bottle,” Dorsey told the officer.

The baby had started to turn blue and appeared lifeless when it was handed to St. Onge, according to a statement. The officer then administered back blows and chest thrusts in an attempt to clear the child’s airway.

Moments later, the child slowly began to respond and cry, to the relief of St. Onge and Dorsey. Shortly after, Marietta Fire Department paramedics arrived at the scene and St. Onge handed over the infant. Together with her mother, the paramedics transported the baby to Kennestone Hospital for treatment.

Some officers will go their whole career waiting for this moment. Officer St. Onge was ready and applied his training from (9) years in the Marine Corps and (5) as an Officer at MPD and revived an infant that was choking! Please take a moment to read more:On May 15th at approximately 7:02 PM a woman called 911 and stated her two-month old infant was conscious but not breathing and was turning blue. Police, Fire and Metro Ambulance were all dispatched.Marietta Police Officer Nick St. Onge was the first to arrive on scene and observed a woman standing in the parking lot, holding an infant. The woman, later identified to be the infant’s grandmother, Kianna Dorsey immediately approached Officer St. Onge. Ms. Dorsey handed her granddaughter to Officer St. Onge and explained she had finished a bottle and now was not breathing. The infant appeared near lifeless, was not breathing and was turning blue. Officer St. Onge administered back blows and chest thrusts in an attempt to clear the child’s airway. The infant slowly began to respond to the efforts he provided, crying and breathing irregularly. Officer St. Onge continued to provide care to the infant until Marietta Fire Department paramedics arrived and took over. Metro Ambulance transported the infant and her mother to Kennestone Hospital for further treatment. We applaud the efforts of everyone involved, cherish the training they received to be ready for this incident and are grateful to report the infant was released from the Hospital and is at home with her family. City of Marietta, Ga., Government

Posted by Marietta, Georgia Police Department on Thursday, May 24, 2018

St. Onge credited his nine years of experience being a Marine and five years in the police force, plus medical training for the child’s survival.

In an interview with ABC Atlanta affiliate WSB-TV, St. Onge revealed that he took CPR class in February.

The infant has already been released and is safe at home with her family, according to the police report.  /ra