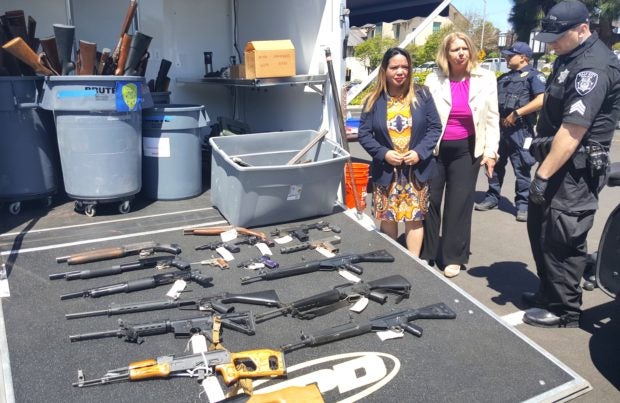 Owners turned in the guns Daly City Hall parking lot with no questions asked by the police.

Sergeant Ron Harrison of the Daly City Police (DCP) explained that the guns that were surrendered in exchange for money would ultimately be destroyed.

“By this, we are helping the community combat gun violence in having a place where people can turn in guns that they no longer want to keep,” Harrison added. “Working with Colma and Pacifica City police departments and the media we got a lot of guns off the streets; it even exceeded our expectations. We do this periodically and this is the second time this year.” 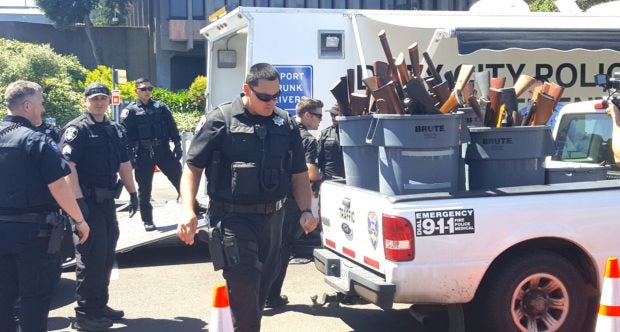 Turned-in weapons consisting of handguns, rifles, assault weapons, shotguns are loaded in a police service vehicle to be transported for storage before they are finally destroyed later. INQUIRER/Jun Nucum

Fil-Am Daly City Mayor Juslyn Manalo was also pleased that the campaign was received very well by residents of the city.

“Our Daly City Police Department has done an enormous job in keeping the event very organized and safe that people can come here and turn in their firearms. Very early, there was already a long line of folks waiting to come in and turn in their guns,” beamed Manalo.

“For me it is really important to see your community members willing to participate to get these guns out of their homes or off the streets and have a safer community. Having at least 150 guns in the hands of our Daly City Police within an hour shows how much people are willing to support and they understand the need to let go of these in an anonymous way, no questions asked. They get a hundred dollars for handguns and $200 for assault weapons.”

Manalo referred to the spate of shootings that had happened nationwide.Last May 18 another school shooting, by a high school student in Santa Fe High School in Galveston, Texas, resulted in the deaths of two teachers and eight students with ten others injured 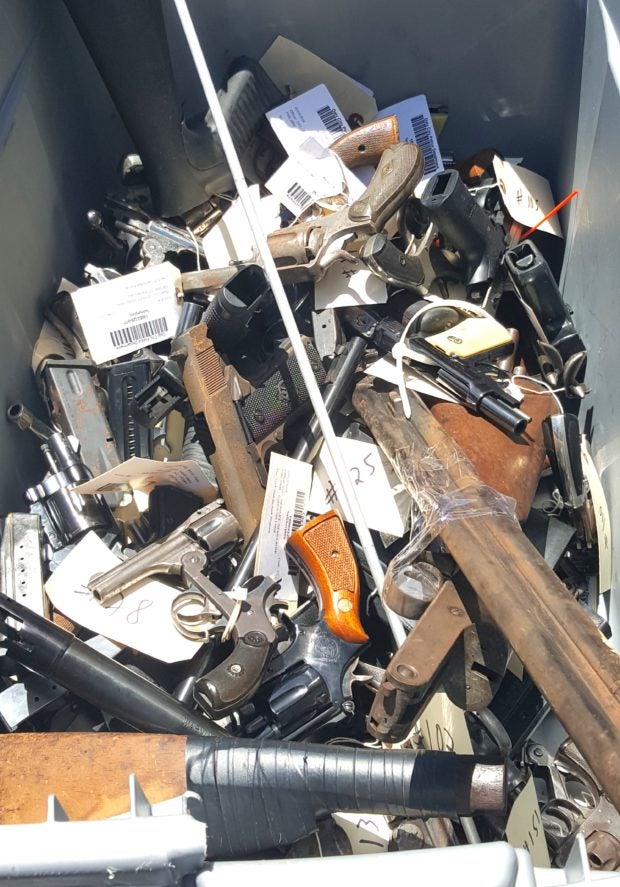 The bulk of weapons turned in for gun buyback were smaller firearms that fetch a hundred dollars each. INQUIRER/Jun Nucum

Dimitrios Pagourtzis, a 17-year-old junior armed with a shotgun and a .38-caliber revolver that belonged to his father, began shooting upon arrival at the high school in the morning.

In what is called as the deadliest mass shooting in the United States in recent years, at least 59 people were killed and about 527 were injured in December 2017 when gunman Stephen Paddock opened fire from his 32nd floor hotel room night on people attending a night country music festival in Las Vegas

Last February, at least 17 people were killed after 19-year-old Nikolas Cruz opened fire at Marjory Stoneman Douglas High School campus in Parkland, Florida. It was the deadliest school shooting, after the 2007 Virginia Tech massacre where 32 people were killed, and the 2012 Sandy Hook Elementary School in Connecticut where 26 were killed.

“If we can save a life, that is immeasurable. People also want to take guns out of their homes,” Manalo maintains. She said that the funds to buy back the guns came from donations from different communities, private individuals, and elected officials.

“For the budget, last year we got money left over from the last gun buyback. Congresswoman Jackie Speier provided some resources. Supervisor Canepa, the towns of Colma and Pacifica also contributed this year, and the Daly City Police Department was allowed to use their assets for this. It is really a collaboration under the leadership and management of our Daly City Police Department,” explained Manalo.