A macho president? Not when it comes to China

A macho president? Not when it comes to China 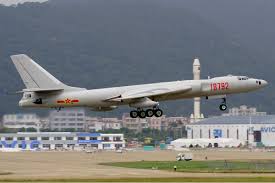 NEW YORK—China recently landed bombers on islands that form part of the Spratlys—islands that it claims, despite these being within the territorial boundaries of the Philippines. The People’s Republic has fortified seven of these, transforming them essentially into military bases.

China says it has a right to do whatever it wants on its own territory. Such aggressive behavior, clearly in violation of international law, while disturbing, is not at all surprising, given China’s stated policy of making virtually all of the South China/West Philippine Sea its own. Southeast Asian nations such as Vietnam, Taiwan, Malaysia, and Brunei, have, along with the Philippines, opposed this land, or rather, sea grabbing.

Beijing has done so, mainly to project itself as the superpower to rival the United States’ military dominance not just in the neighborhood but globally. Through the waters the PRC covets passes an estimated $3 to $5 trillion in trade annually. If one country were to control these waterways, it would have tremendous leverage over the global economy, and thus if it so desired deny any other country’s ships passage were relations with that country not go the way Beijing wishes. Hence, the international consensus that these waters remain open and free.

And what is the current administration in Manila doing about this latest finger-in-your-eye behavior?

And what has it been doing since it took power in mid-2016?

Let me remind readers that when he was campaigning for the presidency, Duterte vowed that he would take a jet ski and plant the Philippine flag on one of the Spratlys—an act of action-hero derring-do that symbolized his fear-no-man-or-country persona that in large part helped get him into Malacañang. (I would have said, “fear no person” except that this president seems to fear women, especially those who dare to criticize his authoritarian and brutal policies. In his world, women are to be seen and not heard.)

In reality, when it comes to taking China to task, he is anything but macho. Truth to tell, he is a mucho pussycat. Every time the big cat roars, the kitten meows meekly. Such is the way in the hierarchy of bullies. The lesser ones always make sure to play the eager subaltern.

For a moment in the early days of his presidency, nationalists took heart when it seemed he could and would stand up to any and all of the big powers when he criticized the United States, the country’s chief ally, promising a more independent foreign policy.

But he then turned around and became a supplicant for Beijing’s favor. Realpolitik is of course a necessary component of how a nation acts on the international stage. By seeking to improve ties with China, soured by the previous administration’s suit filed with a tribunal in conjunction with the United Nations Convention on the Law of the Sea (UNCLOS), that in 2016 ruled in favor of the Philippines, and not insisting that Beijing comply with the ruling, Duterte has dropped the ball.

That ruling could have been used effectively to rally international support for Manila’s jurisdictional claim, particularly among the nations that vigorously dispute Beijing’s assertions. Puzzlingly, Duterte is reluctant to uphold the Philippines’ sovereign rights.

Why drop this ace?  Is it to encourage Chinese investments especially in the country’s infrastructure? Is the Philippines so bereft of funds that it cannot afford to repair its own house? If it is, it is due to the corruption that still plagues the country, an endemic affliction that the president promised to eradicate. (Add that to the list of his unfulfilled campaign promises, which includes untangling Metropolitan Manila’s nightmarish traffic, one of the worst, if not the worst, on the planet.)

The president has stated that he would like both countries to conduct joint exploratory ventures for oil and gas reserves in the disputed waters. With the latter scenario, however, the way things stand now, it would be China calling the shots, rather than the Philippines.

I’m sure there’s more to the story than meets the eye, particularly where potentially huge amounts of money are involved. As Deep Throat, the key informant in the Watergate scandal that led to Nixon’s downfall, once said, “Follow the money.” Therein lies the tale.