Learning to nap in New York, the city that never sleeps 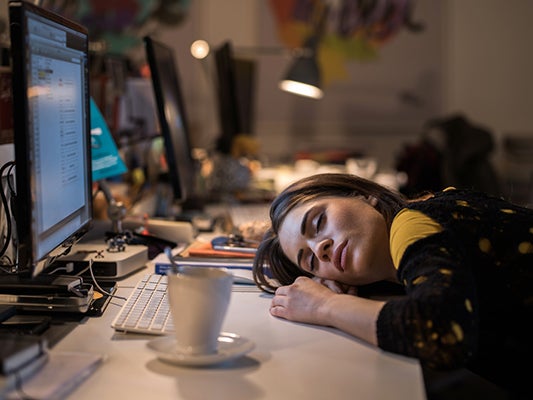 A growing number of New Yorkers are opting for a quick nap during office hours. Image: BraunS/Istock.com via AFP

New York is the city that never sleeps, but arduous commutes, hellish hours and ultra-competitive jobs mean even the most wired of party animals or dedicated employees have to recharge their batteries.

But instead of knocking back a coffee or quaffing an energy drink, a growing number of New Yorkers are opting for a quick nap during office hours.

With affluent Americans increasingly health-conscious — indulging in fads such as green juice, hot-house yoga and matcha tea — a few pay-for-sleep businesses are now offering customers a little shut-eye on the QT.

Nap York is one. Opening three months ago in a three-story building near Penn Station, $12 buys patrons 30 minutes in a wooden sleep cabin, day or night.

The business opened with seven cabins, but demand quickly exceeded supply and they added 22 more. Soon there will also be hammocks on the roof, where half an hour’s kick-back will cost $15.

The United States sleep deficit is real. According to the U.S. Centers for Disease Control and Prevention, a third of Americans sleep less than they should.

Only 24 percent of New Yorkers get eight or more hours of sleep; nearly half get six or less, according to a state-wide survey for Siena College.

Lack of sleep causes moodiness, low productivity and poor concentration. It also costs the U.S. economy up to $411 billion and the equivalent of 1.23 million working days a year, according to a Rand Corporation study in 2016.

Laura Li, a 28-year-old copy editor for a travel company, is someone who prefers a 35-minute kip to a coffee. Each week she pops along to YeloSpa, a luxurious, spa-style Fifth Avenue fixture opposite Trump Tower.

Li steps into a hexagonal cockpit that looks straight out of a science fiction movie and lies on a bed suspended in a position of zero gravity, knees bent and feet elevated to lower the heart rate and induce sleep.

“I come here specially on days where I have a lot of work, just to get more energy for the rest of the afternoon,” says Li. “I don’t drink coffee so if I feel tired there’s nothing I can really do, other than sleeping.”

She may not have told colleagues that she naps during lunch, but has confessed to friends, who are baffled by the concept of paying to sleep.

“They might think this is a waste of time or a waste of money,” she admitted. “As long as I can afford it, then it’s worth it. I just feel better afterward, that’s enough.”

Daskalova has seen her clientele grow gradually and believes that cultural attitudes in America are changing. “Resetting you for the rest of the day is much better than crashing in your desk in the middle of work,” she says.

Who escapes to take a nap? Those who work long hours or live miles away and want time out before a night out. Pregnant women who are exhausted. Parents of babies suffering sleepless nights and party-goers who need a breather.

He installed several in the Empire State Building until security requirements kicked them out, then focused sales on companies, universities, hospitals and airports. Google and NASA are among those who have bought his pods.

“People’s attitudes changed dramatically in the last 15 years, there’s much more awareness of the importance of sleep and the benefit,” Lindholst says.

But in a city with the longest working day in the States, travel time included, he thinks it will take a full generation to erase old stigmas about laziness.

“We use the argument all the time that we are talking about a very short period of time, 10 to 20 minutes, essentially the same (as) a coffee break or in New York a smoke break,” he explained.

One MetroNaps capsule lives in the SoHo offices of Thrive Global, a wellness startup founded by Arianna Huffington, author of bestselling 2016 tome “The Sleep Revolution” and a founder of The Huffington Post.

Her book calls for an end to “the delusion that we need to burn out to succeed.”

“We’re in the middle of a cultural shift, one in which more and more of us are taking steps to reclaim sleep,” she writes. JB

Could writing your ‘to-do’ list before bedtime help you get more sleep?