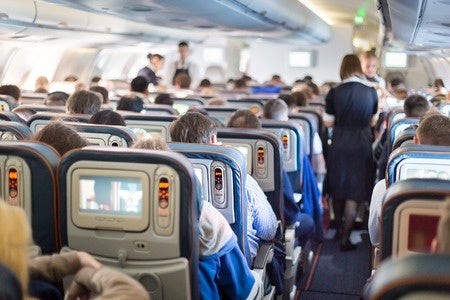 A 45-year-old man aboard a Frontier Airlines flight from Denver, Colorado, to Charleston, South Carolina, was arrested for groping a woman and publicly peeing on his seat.

One witness named Emily recalled that the man, identified as Michael Allen Haag, allegedly groped a woman he was seated next to. This was first reported by KDVR on Sunday.

Emily remembered the woman scream “…[I]f this man f***ing touches me one more time I’ll f***ing kill him” when she was touched by Haag.  “She said that he ordered two double shots of vodka, so four drinks while they were sitting there.”

The woman said that Haag was asking her personal questions, while he was looking at her chest and legs. This was according to an FBI affidavit.

The affidavit also cited that Haag touched another woman as she was sleeping. He first held her fingers, then going down to her legs. The second woman reacted, “Stop touching me.” She then summoned a flight attendant, and Haag was moved to the back of the plane, where there was an empty row. Emily said in the report that she was warned about him.

She pulled out her phone to photograph Haag to her friends. Emily then did not expect what was coming next: He started urinating on the seat in front of him.

“And I scream, ‘he’s f***ing peeing. He’s peeing. Oh my god,'” she said. “And the flight attendant doesn’t even acknowledge him at first. [The attendant] acknowledges me and says you need to calm down and stop cursing.”

After she complained, Emily was moved to the front of the plane, bag fees waived and was given a $200 (almost P10,500) Frontier voucher.

“I think they handled it (the incident) extremely poorly,” Emily opined on how the airlines handled the situation. “Someone should have sat with him.”

Meanwhile, Haag was arrested by Charleston Aviation Authority Police Department when the plane arrived at its destination. He was then released on a $25,000 (around P1.3 million) bond, but restricted from traveling in both Colorado and South Carolina, and prevented from “excessive alcohol use.”

“The safety and security of our passengers is our top priority at Frontier,” the airlines said in a statement about the incident. “We have been made aware of this situation and are working with the appropriate authorities.” Katrina Hallare