Avendula is the owner and managing executive of Professional Placement & Recruitment, Inc. (PPRI), with offices in Woodside, Queens. PRRI was described in the indictment as a “medical staffing agency that provided nursing staff members to healthcare facilities, including residential nursing facilities located in New York…that provided care to elderly patients.”

If convicted, her assets may be seized.

Her lawyer, Samuel Jacobson, did not return a call from The FilAm.

Avendula was the proprietor of Payag Filipino restaurant, which closed down in July 2017, a move she called a “wise decision” then. She is also the producer of “I Am Pinoy Proud Ako,” a web-based political program known as an ardent supporter of Philippine President Rodrigo Duterte.

According to court documents filed with the U.S. District Court Eastern District of New York, Avendula engaged in a series of “fraudulent schemes” where she would hire regular nurses from the Philippines using the H-1B visa for “specialty occupations.” 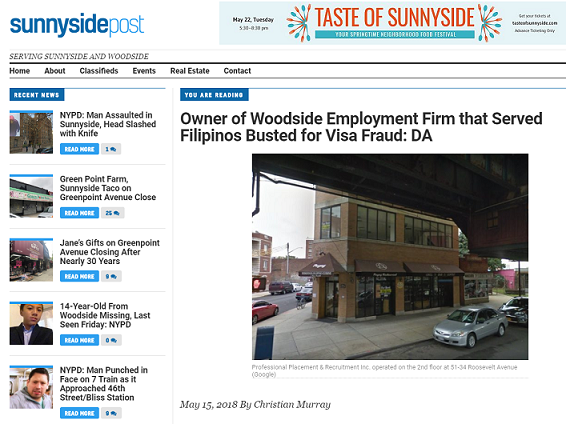 Other cases were cited in the indictment for nurses seeking positions as Pharmaceutical Analyst or Clinical Coordinator.

The document further says that Avendula “required beneficiaries whose Form I-140 petitions were granted to pay her up to $15,000.”

The alleged “fraudulent scheme” occurred between October 2009 and February 2015.

No arrest warrant was issued against Rena. A trial is expected to last less than six weeks.