Ex-voice over talent for Vilma, et al., in own film--‘Bitter Melon’

Ex-voice over talent for Vilma, et al., in own film–‘Bitter Melon’ 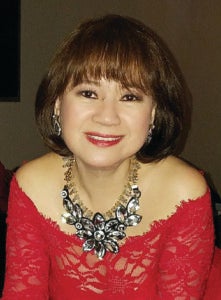 MILPITAS, California – Some actors build their rep on stage or screen before they become voice talents for animation or voice-overs. Just like Leah Salonga was Kim (in Miss Saigon) and Eponine (in Les Misérables) on stage and then Princess Jasmine (in Aladdin) and Mulan in Disney animation.

But Josephine De Jesus’ talent could not be kept behind the scene any longer. The voice that you thought was Vilma Santos or Lorna Tolentino or Alma Moreno is now taking it back and putting her face to it in her first Indie film appearance in Bitter Melon. The movie premiered last May 12 at the Kabuki AMC theater in San Francisco, then played May 19 at Roxie Theater and then again on May 23 at Piedmont Theater in Oakland.

Bitter Melon is the third feature film from award-winning H.P. Mendoza (Colma: The Musical, Fruit Fly, I Am a Ghost). It starts as a holiday reunion for a Filipino American family at their home in San Francisco. The bitter pill or, because they’re Ilocano, the bitter melon to swallow is that second child, Troy (played by Patrick Espino), is a bully to his mother Prisa (De Jesus) and even physically abusive to his wife. The plot turns into a darkly humorous crime scenario as youngest son, Declan (Jon Norman Schneider), leads the conspiracy to murder Troy.

For De Jesus, the chance to be in a major role, among thespians like Brian Rivera (recently in the San Jose Lincoln Theater Center production of The King and I) is a dream come true. She landed her part by auditioning at ABS-CBN when the studio called for Ilocano-speaking actors in July last year. De Jesus is a native of Dagupan City.

She didn’t realize that Bitter Melon writer-director H.P. Mendoza would audition her personally. Nor was she prepared for a monologue (emoting without script) on the first day. Anyway, she read the script in Ilocano then something about her made Mendoza ask her to come back.

This was the voice that launched more than a thousand continuities before digital technology, when films were put in cans with audio and video loops separate because passing tricycles or a street vendor hawking her wares could spoil a dramatic scene. This was the age when background noise could not be filtered out efficiently, before noise cancellation technology. So, the loops were separate and synching was inevitably part of the final process. If you’ve seen enough spaghetti westerns in the ‘60s or kung-fu movies with bad dubbing in the ‘70s, you’d understand why there was a voice-over industry.

And then, there was the diva factor. Many old-time directors felt it was more time- and cost-effective to bring in a voice-over talent to finish the loops than to contend with the principal actor’s busy schedule or irascible mood or both.

De Jesus said she virtually put herself through college voicing for directors like Eddie Garcia, Elwood Perez, and Maryo delos Reyes. She’s that good. Some actors are known to come up with tears on demand. De Jesus just turns on the voice. And that was what Mendoza experienced when he gave De Jesus the part in Bitter Melon.

When asked how she does it, De Jesus couldn’t explain. But if you remember Lorna Tolentino endorsing on TV White Castle five-year-old Whisky with the promise line, “good for one shot,” you can see in your mind’s eye, De Jesus astride a white horse in a two piece when she owns that one line.

The first time she tried out to dub for Vilma Santos, director Elwood Perez skeptically told her everybody recognizes Vilma’s voice and if she didn’t get it right, Perez would just pay for her cab fare back home. De Jesus was dubbing for Vilma Santos in the 1981 movie ‘Pakawalan mo ako.’ Vilma’s character was having an affair with Christopher de Leon’s and the segment was when Vilma’s character asks Christopher’s character to let her go because one of them was married. Perez worried that it was pivotal and anything that did not belong could mar the segment. But after seeing De Jesus’ work, Perez exclaimed in awe, “Ay, p– ka! Where did you get that voice?” He then ordered the production crew to put out the remaining loops for dubbing and unctuously asked De Jesus, “Have you eaten yet?”

The amazing thing is she can watch the rushes and get the pitch and intonation immediately. Vilma had a script. But De Jesus didn’t and she had to wing it, including the dramatic wails and tearful cries and Vilma’s pauses. De Jesus usually doesn’t need more than two takes and an assignment can take two days tops. She’s also a one-stop shop voice-shifter, taking assignments for an old woman’s or another character’s voice when needed for the same film.

When some of the so-called soft drink starlets met tragic endings, De Jesus came in handy. Perez got her to dub Claudia Zobel’s movies.

Agencies like J. Walther Thompson, Ace Compton (Saatchi & Saatchi) and Basic Advertising sought her for their 30-second commercials. On radio, she did Tide or Minola cooking oil Tagalog scripts in Manila and then in Ilocano in Baguio and Pangasinan.

De Jesus is probably the best argument for voice projection as much as Lee Strassburg is for method acting. Her part in Bitter Melon gives her more lines, aside from face time on the big screen. Because it’s a FilAm production, the drama is about dysfunction that is all the more tragic because it leaks out at a happy family reunion. A different beast than the usual revenge and unrequited love stories in Tagalog movies. She now has a chance to be seen on-screen and in a Stateside production.

The paradigm shift in De Jesus’ career is not necessarily disruptive but welcome.  Josephine, 61, lives with her second hubby, Jun Aguilar (Jun de Jesus in real life) in Hayward. He was an actor-singer in the ‘70s and has a band that plays around the SF Bay Area. But that’s not the only showbiz connection for De Jesus.

Her sister Erlinda Cortez is also a voice talent and leading lady for Tiya Dely and dzRH radio programs. In fact, you might have seen her as Matutina’s sister with the character-defining nails-scraping-the-board voice in ‘Home Along the Riles.’ For sure, you have heard her son’s and daughter’s English dubs in any number of Korean or Spanish tele-serye.

MOST READ
usa First Fil-Am on San Francisco Police Commission sworn in
usa The iPod Discontinued By Apple After 20 Years
usa Covid symptoms linger two years for some
usa Hospital ship USNS Mercy leaves San Diego for aid mission in Pacific
newsinfo PPCRV finds 1.6% mismatch in election returns
newsinfo Wildlife photographer gets recognized for photo of PH Eagle in P1,000 bill
newsinfo ‘Vote-buying’ spree drives mobile phone sales
DID YOU KNOW?
The 12 Best Lat Exercises for Muscle Growth
Countdown to summer: tips for learning how to surf
User Guide: How to Track a Lost iPhone
The Best Filipino Food to Try When Visiting the Philippines
Water Filter Pitcher: The secret to having clean water at home
Top 15 Most Beautiful Flowers in the World