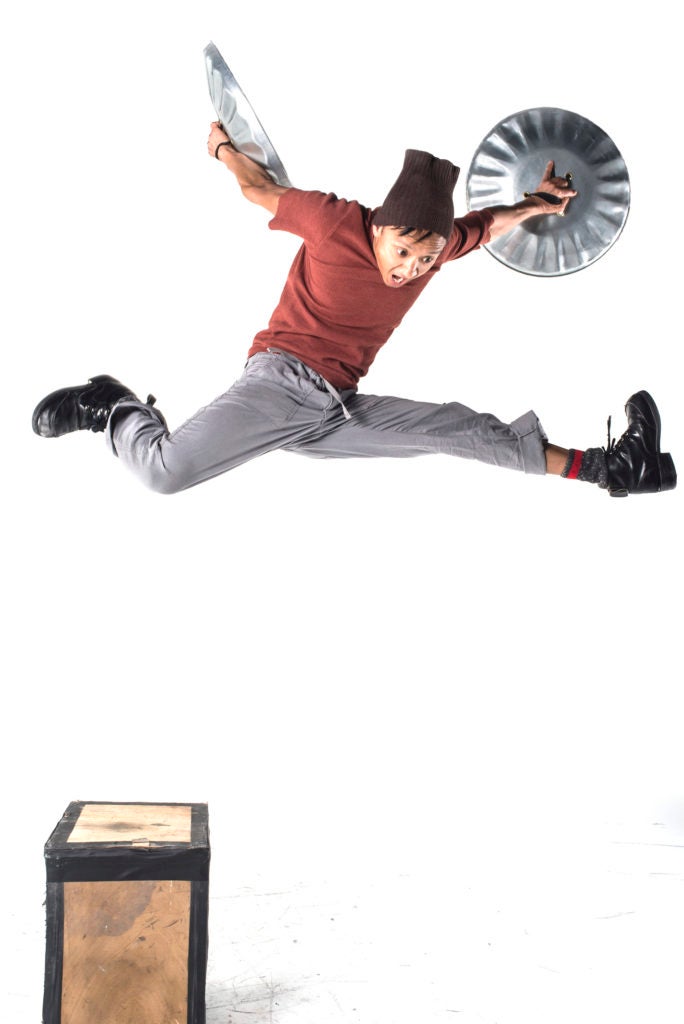 One of the characters Alan Asuncion plays in “STOMP” is “Mozzie.” STEVE MCNICHOLAS

NEW YORK — It’s a profession that requires banging around with broomsticks, hub caps, trash cans, lighters, and other objects that may occasionally be considered trash. There’s also a lot of heavy stomping in boots.

But you can’t just do it however you like, you have to be in sync with a group of other people. And you have to produce rhythm and music. And you do it in front of hundreds of theatergoers.

Seen another way, you’re part of an orchestra that plays unconventional musical instruments, but you also have to dance and act (and be funny).

Alan Asuncion has been in a job like this for more than a decade now, creating performances that are an amalgamation of music, dance, and theater.

He’s in the cast of “STOMP” in New York.“Celebrating 10 years in any job is a great milestone and achievement!” he says of his 10th anniversary with the show last year.

“Getting along with all the people you work with makes the time really fly by,” he adds.  “This has always been a dream gig for me,” he says of the show created by Luke Cresswell and Steve McNicholas. 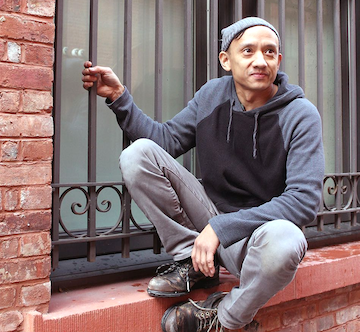 Alan Asuncion celebrates 10 years as part of the cast of “STOMP.” INSTAGRAM

The performers “make a rhythm out of anything we can get our hands on that makes a sound,” explains Cresswell. “STOMP” also has ongoing North American and European tours and will be celebrating its 25th anniversary next year.

Asuncion says it feels “surreal” that he’s considered a veteran of the show even though he is “still learning and evolving.”

Asuncion was born in Far Rockaway, Queens—the youngest of five kids. “My mother is from Cadiz and my father is from Hinigaran, Negros Occidental.”

He began his music career playing the piano and drums and eventually began teaching lessons on how to play these two instruments.

At 14 years old, he started playing in various bands in the wedding circuit, which allowed him to perform with many Broadway and notable jazz artists. Prior to joining “STOMP,” he had been in the cast of the aerial show “De La Guarda.”

“Most of the rhythms and music of the show were fairly easy for me to learn, coming from a music and drumming background.”

Though photographs of Asuncion in performance may not seem like it (usually with him flying in the air), what proved a little more difficult for him in the beginning was the physical demands of the show.

“Getting used to the movement and physicality of the prop, or making it look easy, was always the most awkward for me. Plus, I’m not a dancer, so my movement skills were lame.”

“The most challenging prop to learn for me were the poles. It wasn’t necessarily because of the physicality of the prop, but because the music and choreography for the poles are probably the most dynamically and rhythmically complex pieces in the show.”

It would seem Asuncion has learned a thing or two. After all, one of the characters he’s been assigned to play is Mozzie, who is described as “acrobatic.

Ten years in, he has developed a pre-show routine.

“About an hour and a half before the show, we have a rehearsal and a 20-minute body warm-up.”  Afterwards, there is a block of time allotted for the cast to mentally prepare for the show. 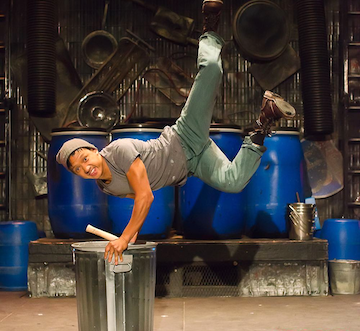 Asuncion in a scene from “STOMP,” a show that produces “rhythm out of anything … that makes a sound.” INSTAGRAM

“That’s when I usually go out to get an espresso. I go when I don’t even need it. Just to go out and be outside for a little bit.That, and I play ‘Words with Friends.’”

Since Asuncion makes music daily for theatergoers, what kinds of music does he himself listen to? “I haven’t really purchased any music recently, but while driving or cooking, I have a few Pandora rock and jazz stations that I have my phases with.

He listens to artists or groups such as John Mayer, The Police, Snarky Puppy, Robert Glasper, Haitus Kayote, Esperanza Spalding, Knower, Mister Barrington, Edit Bunker. “Too many!” he says.