Darkness at Noon: The Injustices of the Supreme Court

NEW YORK—The Philippines’ final arbiter of what is constitutional or not may be about to undermine its own authority, upset the always delicate dance between the three branches of government, and thus betray the trust of the nation.

The Supreme Court will shortly entertain a petition, known otherwise as a Quo Warranto, to oust one of its own, no less than the Chief Justice herself, Maria Lourdes Sereno.

Prompted by an impeachment summons by Congress, five Supreme Court justices essentially abdicated the independence of the judiciary—theirindependence—when they agreed to appear before it in order to take the Chief Justice down. The proceedings were such so as not allow the Chief Justice or her lawyers to question her accusers—a fundamental right in any legitimate democracy—and rendering the proceedings in essence a mock trial.

Whatever grudges this quintet may bear against Chief Justice Sereno, and even were these legitimate grievances, though they don’t appear to be, by going down this path, the Supreme Court will be yielding its co-equal status to the Congress and most certainly to the presidency. 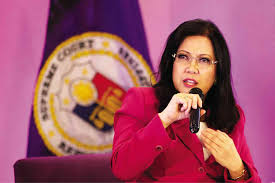 Let’s be clear about this: Congress is packed with allies of President Duterte, though perhaps “allies” may be the wrong word. Underlings? Sycophants? Tuta? All of the above?

Whatever Duterte wants, Duterte gets. And clearly Duterte has at least five sympathizers on the Supreme Court. The president may claim that it is all out of his hands, an assertion that will ring true only for members of the Flat Earth Society.

A couple of days ago, a full-page ad appeared in this newspaper and in The Philippine Stardenouncing the Quo Warranto petition as “illegal and unconstitutional” and “A BETRAYAL OF DEMOCRACY[sic].” Among the signatories were two National Artists, writers, theater and film directors, civic leaders, prominent religious figures, a few legislators, and the heads of many nongovernmental organizations.

The ad takes the Supreme Court to task, asking it to “pull back from the brink” and “not be a party to the death of judicial independence,” reminding it that “the Judiciary’s Code of Conduct decrees resistance against attempts to subvert judicial independence” and “orders judges to be impartial.” Pointing out the obvious, the statement goes on to say that in light of the five justices prejudging the Chief Justice, the Supreme Court must “COMPEL THE INHIBITION OF THE BIASED 5. DISMISS THE ILLEGAL QUO WARRANTO PETITION. [Sic]]”

Why on earth would these five justices engage in self-destructive behavior? Why in short are they so eager to cut off their own noses to spite their faces? The promise of silver? Of more power (which would be illusory, given their willingness to reduce the substantial power they already have)?

In case the powers that be forget where their authority comes from, in a paragraph not highlighted or capitalized, the statement reminds them: “The State derives its power from the people. When the key instruments of the state conspire to subvert the constitution and democracy, the people must rise as the last bastion of our rights and freedom.” This is a clear reference to the People Power uprisings in 1986 and in 2000 that saw the ouster of Ferdinand Marcos and of Joseph Estrada respectively.

Martial law may not yet be in place nationwide, being limited for now to Mindanao. But does anyone still have doubts that the greatest threat to the country’s freedoms, such as they are, are not the insurgencies, not the greatly exaggerated drug menace, not even poverty, but the Bully-in-Chief himself and his enablers, among whom are the five (in)justices and a supine Congress?

Duterte has made no secret that he worships at the shrine of the late tyrant Ferdinand Marcos.  In his twisted theology of (un)liberation, Duterte is the self-proclaimed messiah. With a messiah like that, who needs enemies?