Frequent exposure to a UV lamp for nails was linked to cancer-causing cell mutations and DNA damage. A new research has triggered questions about the safety of these nail dryers as ultraviolet radiation can also cause skin damage.

The University of California in San Diego conducted a research, and the results are worrisome. They are now warning those who go to salons for gel manicures to consider the research’s conclusions before getting their next gel manicure. Their study shows the possibility of DNA damage.

The results also show the development of cancer cells due to long wavelengths of ultraviolet light from gel nail polish UV lamps. It can also cause cell mutations which increases the risk of skin cancer.

This research shows nail polish lamps may be riskier than previously believed — but should this stop someone from getting a gel manicure?https://t.co/Ps6JE5SFnk

UV light’s danger and its relation to skin cancer are not new. As reports say, using indoor tanning beds is related to premature aging. It is also the same amount of radiation that UV lamp for nails produce.

Ultraviolet lights emit a type of electromagnetic radiation that affects the skin in different ways. But it depends on a specific wavelength. Moreover, the report shows that the most dangerous light comes from the UVA. This light is present in indoor tanning beds, sunlamps, and UV lamp for nails.

In addition, UC San Diego researchers noted. “Most of UVA environmental toxicity is in commercial products, such as tanning beds.”

According to the American Academy of Dermatology Association, UV lighting is a “carcinogen.” It leads to premature aging, melanoma, and eye damage. In addition, the study shows that UV lamp for nails produce wavelengths between 340- 395 nanometers. It is a wavelength that is one of the most dangerous on the spectrum. 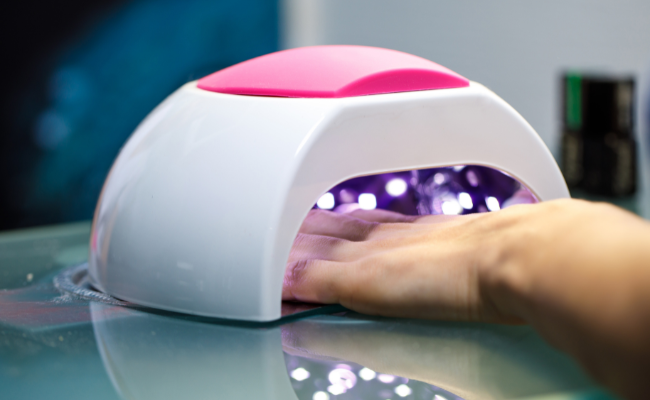 The author of the study, Professor Ludmil Alexandrov, said that when they conducted the research, “we saw that DNA gets damaged.”

He continued, “We also saw that some of the DNA damage does not repair over time, and it does lead to mutations after every exposure with a UV nail polish dryer. Lastly, we saw that exposure may cause mitochondrial dysfunction, which may also result in additional mutations.”

However, the research isn’t completely telling everyone to stop using UV lamps for nails. The group still needs more studies to get a “more accurate assessment of the risk.”

Alexandrov also said that companies normally market cosmetic devices as safe. But this is the first time there was a study on the possible risks.

Moreover, the Skin Care Foundation suggests using UVA/UVB sunscreen on their hands as protection. However, the new research also states that sunscreen can’t reduce cell carcinoma risk. It can appear under the nail.

Meanwhile, dermatologists who were outside the research told The Post that it is essential to consider that researchers tested human cells and not actual human beings. Humans still have several layers of skin that give additional protection against UV rays.

But the dermatologists also agree that the study’s results highlighted the possibilities for skin cancer-causing DNA damage. The director of the Dermatologic Surgery Center of Washington, Maral Skelsey also noted. This damage could “give rise to the most common skin cancers — basal cell carcinoma and squamous cell carcinoma, as well as melanoma, the most deadly skin cancer.”