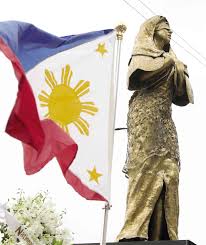 It is a moral outrage when one country tries to suppress the history of another through various forms of coercion. But it is a bigger offense when one’s own government colludes in this crime and commits a breach of trust against its own people. The recent stealth removal by the Philippine government of the Comfort Women Statue in Manila is a massive indignity to the Filipino people and to all those who believe in the sanctity of freedom.

More than 76 years ago, the Philippines, a U.S. Commonwealth at that time, was attacked by the Empire of Japan just hours after Pearl Harbor was bombed.  The United States declared war against Japan, but the ravages of war did not reach the continental United States and instead the war was fought in its colony, the Philippines.

In any war, the majority of casualties are civilians.  Approximately 1 million Filipino civilians died during WWII.  Yet today, the legacy of those who made the ultimate sacrifice is but a dim memory, forgotten by the leaders of the Filipino nation.  Young students grow up without any knowledge of their ancestors’ heroic deeds, many of whom chose death over a life of bondage.  And memorials to Filipinos who suffered so much during the war are dismantled in favor of the Japanese occupiers who inflicted pain and tyranny.   Seventy-four years after World War II ended, one would think that it was the Empire of Japan that won the war in the Philippines.  Perhaps it did.  Otherwise, why are we allowing a foreign power to dictate how our history is being presented?

Many of our leaders have deliberately chosen to forget the nation’s glorious past in favor of the road to economic prosperity.  In doing so, we have lost our sense of national identity.  Without this, the Filipino nation cannot become a leader in its own right.  In the long run, a nation’s self-worth is just as important, if not more, than economic prosperity.  As a country, there is no true sovereignty unless a nation has a sense of identity and self-worth.  If we do not have that, then our ancestors’ sacrifices were all in vain and our nation will remain a vassal of other mightier countries.

In California, several generations of Filipino Americans, who now make up the largest Asian population in the state, grew up without a sense of identity because the legacy of their ancestors were not being taught in schools.  The Filipinos’ contribution during WWII was a seminal part of U.S. history and this should be learned not just by Filipino Americans, but also by all students so that they can appreciate the sacrifices that were made in fighting for their freedom by an entire nation some 5,000 miles away.  It is for this very reason that Bataan Legacy Historical Society, with support from the community, fought for the inclusion of WWII in the Philippines in California’s high school history curriculum framework.  On July 14, 2016, it was finally approved for inclusion in California’s Grade 11 U.S. history curriculum framework.  Because California is one of the two largest consumers of textbooks in the country (Texas being the other), publishers are mandated to include any changes in the curriculum framework in these two states.  These textbooks are distributed nationally so it is only a matter of time before WWII in the Philippines will be taught across the U.S.

This was presented during the last conference of the National Historical Commission of the Philippines in August 2017 in Pampanga.  It was received with much enthusiasm and teachers and historical societies were clamoring for its introduction in the Philippines.  Except for one paragraph about the Bataan Death March in the social studies curriculum, why is it that WWII in the Philippines is not taught in high schools when two weeks are devoted to the EDSA revolution (downfall of Marcos regime)?  Why is there no political will to do this?

The recent removal of the Comfort Women Statue, a memorial to many Filipina women who were enslaved by their Japanese occupiers, is a wakeup call to a nation that needs a strong national identity.  A country’s history should be presented in its unvarnished form.  It should never be tampered with, suppressed or embellished. Students should be able to make their own determination and hopefully, they will become more engaged in their civic affairs.   If we do not heed to this call, we will lose a golden opportunity to awaken our youth so that they can take pride in their heritage and become better citizens of their country and the world.   I am calling on the leaders of the Philippines to invest in their country’s future by educating its youth of its proud legacy – a history unencumbered by economic interests.  I am also calling on the entire Filipino diaspora to take a stand as one nation and not rely on the old proverb “Dios na ang bahala” (God will provide).  What so many fail to recognize is that this is only half of the proverb “Nasa Tao ang Gawa, Nasa Dios ang Bahala” (loosely translated God helps those who help themselves).

As descendants of the greatest generation, we have a moral obligation to ensure that the legacy of our ancestors will live on in future generations.  It is time for Filipinos to take matters into their own hands so that they can have a strong national identity.  Only then can we have a future that is strong and filled with possibilities. Mabuhay ang Pilipinas!