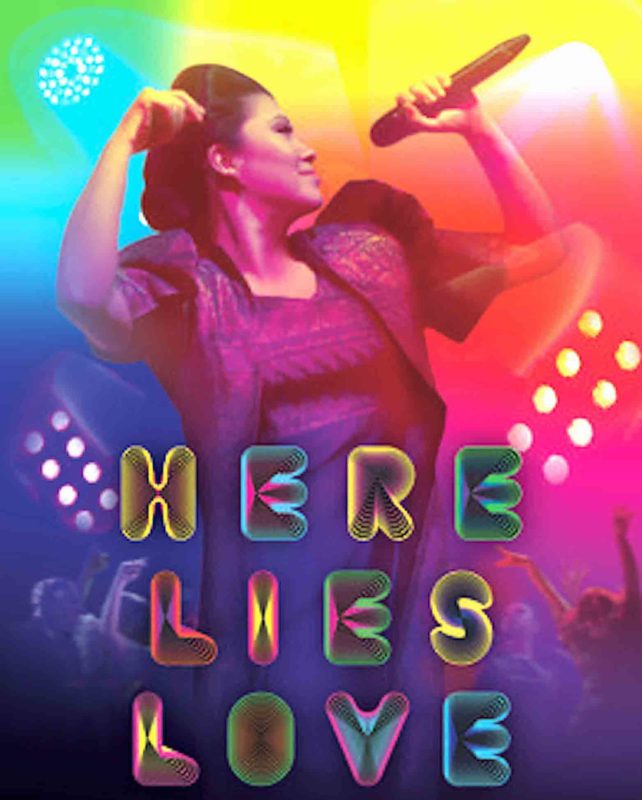 “Here Lies Love,” a disco pop musical about the life of Imelda Marcos and the People Power Revolution of the Philippines, is slated to begin performances on Broadway in June. WIKIPEDIA

NEW YORK — “Here Lies Love,” a disco pop musical about the life of Imelda Marcos and the People Power Revolution of the Philippines, is slated to begin performances on Broadway in June, but the announcement of the musical’s planned opening has sparked passionate reactions on social media platforms. The emotions range from confusion to fury about the show’s premise.

“Here Lies Love” is a biographical musical featuring a score  by David Byrne and Fatboy Slim. The musical’s unique set design simulates a discotheque wherein audiences will have the option of standing and dancing instead of being seated. As soon as the show was announced, however, netizens started posting strongly worded comments, memes, animated GIFs, poems, links to articles, and screenshots or photos of old newspaper headlines to express feedback, on Facebook, Instagram (both @herelieslovebway) and Twitter (@herelieslovebwy, without the a).

Some comments have been enthusiastic (“Excited!!!!” “Sweet!” “Can’t wait!”) and others, curious (“I am intrigued!”). Some have asked how the show would be handling its subject matter: “Somebody pls tell me this is going to be satire.”

On Twitter, numerous opinions have been emphatically against the show. “No,” “EW” and “Booooooo” are just a few of statements among lengthier ones. User @kumukuan wrote, “Take out the first and last word from the musical’s name and that’s all anybody needs to know about this piece of sh_t.”

The musical’s social media accounts then released the following statement:

“What is the show about? The show tells the story of Imelda and Ferdinand Marcos’ rise and fall into infamy, Ninoy Aquino, Martial Law and the People Power Revolution that ended the Marcoses’ 20 year dictatorship.

“What is the show’s history? The show’s critically-acclaimed runs were at The Public Theater (New York) in 2013, the National Theater (London) in 2014 and Seattle Rep (Washington) in 2017.

“How is the story told? Through spectacular music and dynamic staging in an immersive club experience where young Filipinos and Filipino Americans explore, grapple with and interrogate a vital part of their history.

“Why now? History repeats itself. Democracies all over the world are under threat. The biggest threat to any democracy is disinformation, Here Lies Love offers a creative way of re-information — an innovative template on how to stand up to tyrant.

“Why on Broadway? We cannot tell the modern history of the Philippines without the United States. They’re intertwined.

“Here Lies Love is an Anti-Marcos show. It is a pro-Filipino show, being told in a quintessential American form: the Broadway musical. Two cultures, two histories, continuing a centuries-old complicated dance.”

On the show’s Instagram account, user @johnfbau responded in a comment, “Salamat sa paglilinaw! Napakahalaga ang musical na ito lalo na’t nakabalik ang mga Marcos sa mga makapangyarihang puwesto. Kailangang malaman at maunawaan ng publiko ang makatotoong kasaysayan para hindi ito maulit. (Thanks for the clarification. This musical is very important especially now that the Marcoses are back in power. The public must know and understand real history so that it will not be repeated.”

User @keiraandrewsauthor, wrote in a comment, “I am baffled at the criticism that this show glorifies the Marcoses. As a white Canadian who basically only knew about the shoes before I saw this at the Public [Theater], my sympathies were entirely with Aquino and the Filipino people who suffered under the Marcos dictatorship. I can’t wait to see this again on Broadway! It’s more needed than ever.”

User @ficassidy78 wrote, “Yassss! … This musical is even more relevant now especially with the things going on in the Philippines and the world.”