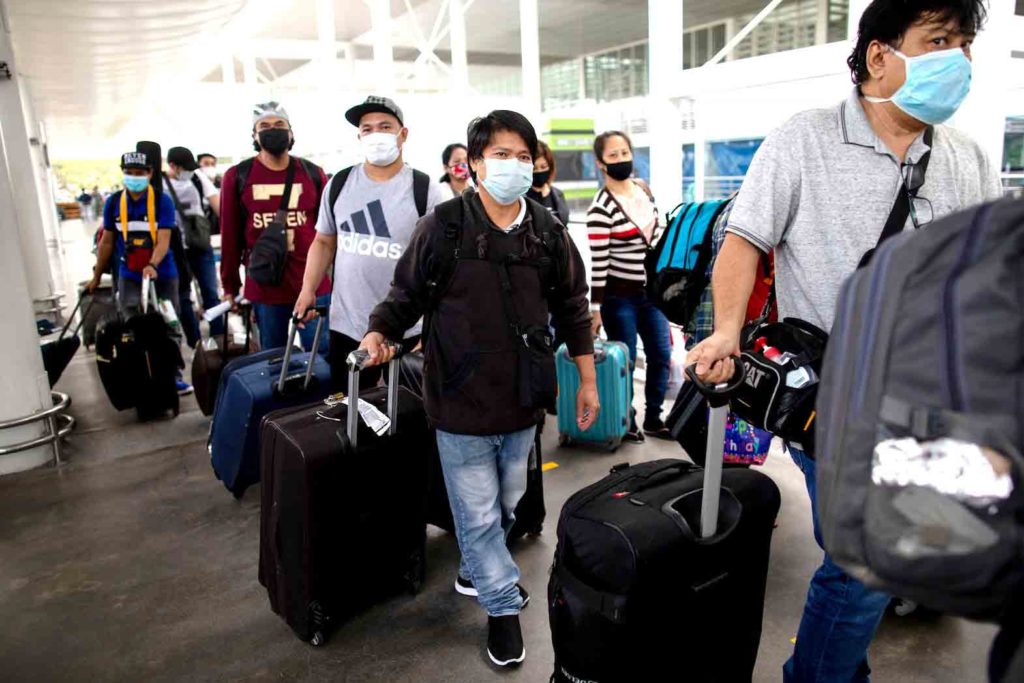 There are many important issues that are either beneficial or disadvantageous to prospective Filipino immigrants to the U.S. REUTERS PHOTO

Family reunification and better economic opportunities are still the most significant considerations for immigrating to the United States. Prospective immigrants or those who want to work in the United States also face several challenges. Below are just a few of the many important issues that are either beneficial or disadvantageous to Filipino immigrants.

Priority for issuance of visas  to immediate relatives of U.S. citizens is the current policy of the U.S. Department of States. So in 2022,  more visas were being issued under this category, which includes parents, minor children and spouses of U.S. citizens. Fiance petitions by U.S. citizens have also benefited from this priority preference.

Unfortunately, those who do not fall under this priority preference experience lengthy waits before they are called for interviews. The U.S. Department of State reported that as of December 2022, there were globally 377,953 classified as documentarily qualified and only 33,406 have been scheduled for interviews. The interviews are being scheduled according to date of completion of submission of documents to the National Visa Center. So, the earlier the documents and forms are submitted the sooner the visa applicant may be added to the queue,

In the last couple of years, the priority dates for other workers under the third preference employment-based category for Filipinos have been current, meaning visas are available. Hence, many unskilled workers including our health caregivers were issued visas under this category. Unfortunately, in May 2022, this visa category retrogressed to June 2020. There will be a couple of more years of wait, but the good news is that the filing chart allows for the processing of visa petitions with priority dates of June 2022.

Registered Nurses, Physical Therapists and other allied health care workers other than those mentioned under the other workers category are still “current” for purposes of filing and final issuance of visas.

This year, there was a proposed legislation for the elimination of the numerical per country quota. If this is going to be re-introduced again, the visas under the EB3 category will be severely impacted.  Health care professionals looking to have their visas issued must get their application processed without further delay to avoid being affected by any future legislation.

In California, at least 2 cases of human trafficking and labor exploitation were filed against Filipinos. Unfortunately, their victims were also from the Philippines. The latest case was in San Francisco where a couple was charged with exploiting and trafficking a woman who took care of their child. Human trafficking survivors may be eligible for lawful status, employment authorization and a potential path to permanent residency.  There has to be an awareness on the part of U.S. employers on what constitutes human trafficking, and individuals must learn to assert rights against traffickers so as not to become victims of  inhumane and degrading  treatment by unscrupulous individuals.

On December 27, 2022, President Biden signed the “Countering Human Trafficking Act of 2022,” which codifies and expands the Department of Homeland Security’s (DHS) Center for Countering Human Trafficking (CCHT). The bill authorizes $14 million to carry out the Act and ensures that the CCHT is staffed with at least 45 employees to carry out the Department’s critical work of combating human trafficking.

In March 2021, President Biden rescinded a public charge rule that, in effect, banned most family-sponsored immigrants with low incomes.

On December 23, 2022, a new final rule on public charge went into effect. Under the new rule, it is safe for immigrants and their families to use health, nutrition and housing programs for which they qualify, including health care programs like Medicaid and COVID care, housing, food programs and many other vital services. Only those deemed likely to be primarily dependent on cash aid for income maintenance or long-term care at government expense could be denied.

Immigrant visa applicants must consult with their legal counsel on how this new public charge rule will benefit them in their applications.

Unlike other countries,  U.S. immigration law has a very  limited number of temporary visas are available to non-agricultural unskilled workers. In December 2022,  the Biden administration increased the number of H2B visas to 64,716  for Fiscal Year 2023. About 44,700 visas are allocated to returning workers who received H2B visas during the last 3 years. These additional visas are available this winter and summer of 2023.

A few years back, Filipinos were banned from receiving H2B visas, but this suspension has already been lifted. U.S. employers may avail this type of visa for certain temporary and seasonal occupations such as restaurant/hospitality, maintenance, construction, landscaping among others.

Will there be legalization? Hopes for passage are dwindling, until a proposal for a modification of registry date offers a ray of hope. If the registry date is modified (through legislation) from 1972 to 2012, at least 6.8 million undocumented persons may be eligible to apply for green cards. Registry allows certain non-citizens who are long-term residents of the United States, who are either undocumented or present in the country under some sort of temporary immigration status, to register as lawful permanent residents.

About 28,000 Filipino DREAMERS may be eligible for an initial application for Deferred Action on Childhood Arrivals (DACA), according to the data gathered by the Migration Policy Institute. But on October 5, 2022, the 5th Circuit Court of Appeals ruled that the DACA program was unlawful and sent the case back to the lower court to consider the Biden’s administration’s new DACA regulations. On October 14, Judge Hanen partially blocked the DACA regulation from going into effect.

While DACA initiative has provided deportation protections and work authorizations to over 800,000 of people who arrived in the United states as children, this temporary solution has been hanging in the balance and faces multiple legal challenges with administrative attempts to end the program.

DREAMERS were brought by their parents at a very young age and did not make the decision to come and live in the United States. They grew up and identify themselves as Americans. Giving them a path to citizenship is long overdue. Thus, this 2023,  it is more urgent for Congress  to pass a permanent solution to protect and defend DREAMERS.

(Atty. Lourdes S. Tancinco is an immigration attorney and immigrant rights advocate based in the San Francisco Bay area and a partner at the Tancinco Law P.C.. She may be reached at [email protected], www.tancinco.com, facebook/tancincolaw, or at 1-888-930-0808)