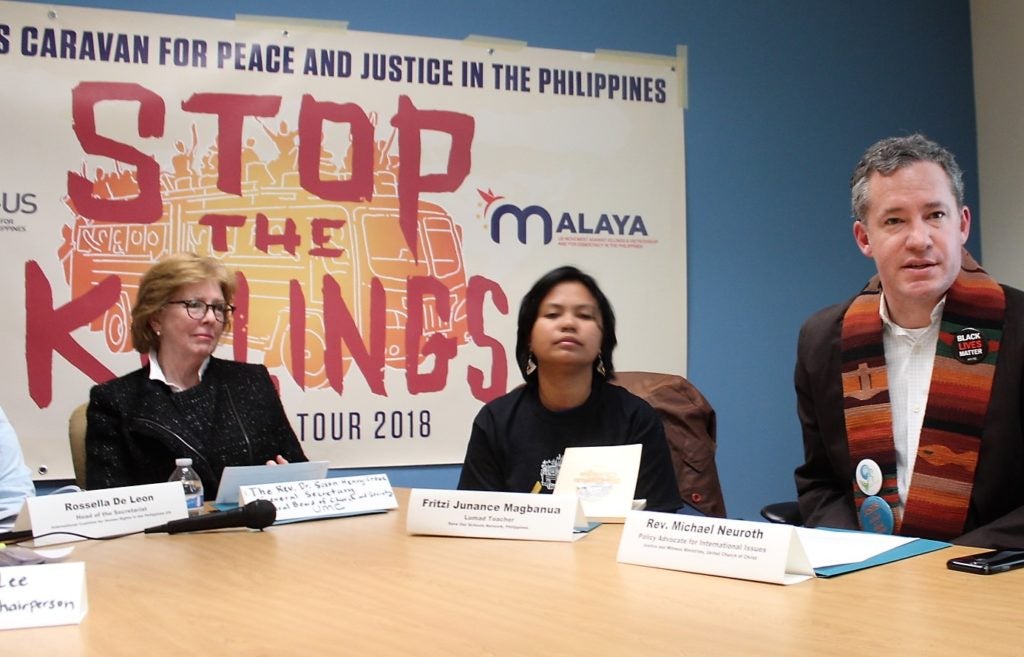 At a press conference, Rev. Michael Neuroth, United Church of Christ Policy Advocate, decries the “pattern of intimidation and harassment” of human rights activists which is “reminiscent of the McCarthy era.” He is joined by Susan Henry-Crowe, General Secretary of the General Board of Church and Society of the United Methodist Church (left) and Lumad activist Fritzi Junance Magbanua. INQUIRER/Jon Melegrito

WASHINGTON, D.C. — Nearly a thousand Christian clergy, lay leaders, and human rights advocates from across the country discussed and condemned the Trump administration’s hostile policies toward Dreamers, immigrants, refugees, newcomers and displaced peoples, and his support of authoritarian leaders like Rodrigo Duterte.

Held at the Doubletree Hotel right across the Pentagon, the annual conference devoted five days of prayer and plenaries, workshops and worship, legislative advocacy, and Capitol Hill visits.

But even before the 2018 Ecumenical Advocacy Days for Global Peace and Justice opened on April 20, participants were shocked by an incident that was totally unexpected. 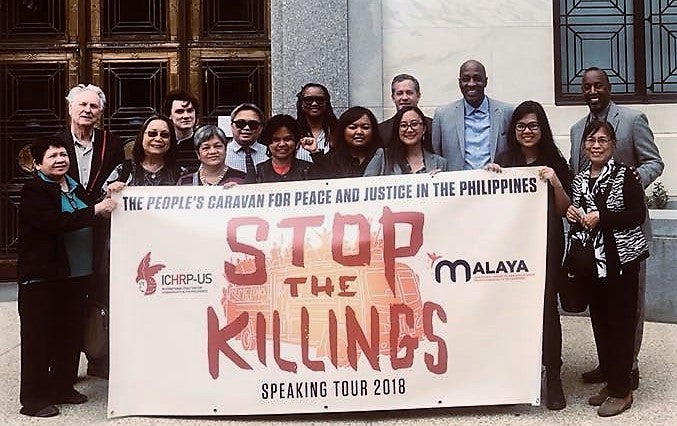 Participants in the 2018 Ecumenical Advocacy Days pose in front of the Dirksen Senate Building after visiting with Senators and U.S. Representatives. (CONTRIBUTED)

One of the guests from the Philippines, who was invited to speak on human rights, became a victim of human rights abuse himself and prevented from attending the conference.

Jerome Succor Aba, a 25-year-old Filipino human rights activist, was part of the People’s Caravan for Peace and Justice in the Philippines. But upon arrival at the San Francisco International Airport on April 18, he was immediately arrested and detained and interrogated for 28 hours by Homeland Security officers. 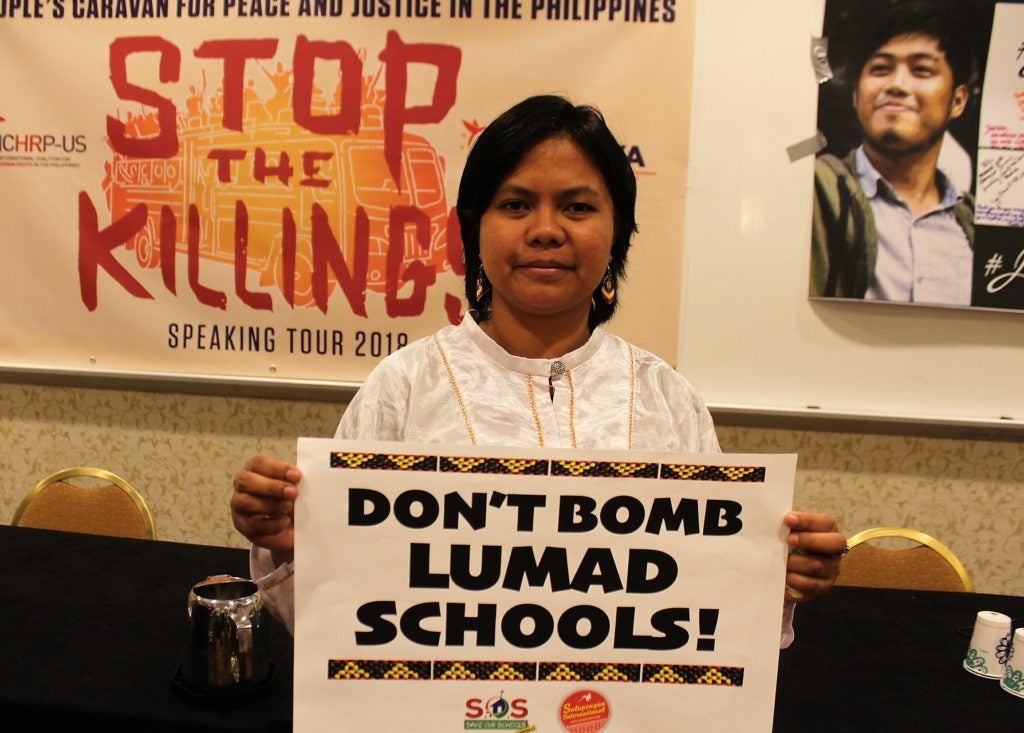 Lumad teacher Fritzi Junance Magbanua holds a sign during her workshop presentation. Behind her is a poster bearing a photo of activist Jerome Aba, who was not allowed by U.S. authorities to attend the conference. INQUIRER/Jon Melegrito

According to his own account, he was handcuffed, questioned about his “terrorist” and “communist” connections and subjected to physical and psychological torture.

News of Aba’s detention prompted protest actions at the SFO airport. A crowd of several hundred community supporters demonstrated in front of the Customs and Border Patrol (CBP) offices at the airport to express outrage and shock. A barrage of phone calls by church leaders to CBP and Homeland Security officials followed. Social media also erupted with outrage.

In a Facebook post, Dawn Bohulano Mabalon, associate professor of History at San Francisco State University, said, “I am disgusted and enraged.

I can’t even find the words to fully express how angry I am about how Jerome Aba, noted Philippine human rights activist, was treated at the hands of Customs and Border Patrol right here in our own backyard at SFO this past week. Stripped naked, put into a cold room (as is Border Patrol’s M.O.), tortured, antagonized, given PORK to eat (though he told them he is a Muslim!) and more, and all we have is some silly excuse that his visa had a technical glitch. What kind of collusion is happening between the Duterte and Trump regimes?”

Aba was eventually deported back to the Philippines.

At a press conference on April 24 held at the Methodist Building, church leaders again repeated their call for justice and accountability in Aba’s case.

“I am horrified,” said Susan Henry-Crowe, General Secretary of the General Board of Church and Society of the United Methodist Church (UMC). “What would already be considered shocking treatment is especially abhorrent considering Mr. Aba has a valid visa to visit the U.S. and he was coming to speak about peace-building.”

Rev. Michael Neuroth, Policy Advocate for International Issues of the United Church of Christ, decried the “pattern of intimidation and harassment which is reminiscent of the McCarthy era. The U.S. must denounce this practice of violating human rights.”

The Sisters of Mercy, UMC, the United Church of Christ and the U.S. Conference of Catholic Bishops were among the major religious groups that invited Aba to the ecumenical gathering. Their representatives, along with members of the Philippine delegation, spent two days visiting the offices of 17 Senators and Representatives.  They also met with Senior Desk officers of the State Department Philippine Desk. In their meetings, the advocates called for “accountability” on the part of President Trump and President Duterte in Aba’s torture, illegal arrest and detention.

The legislative visits were arranged by the International Coalition of Human Rights in the Philippines (ICHRP). The global network of 40 organizations is also organizing a national tour of The People’s Caravan for Peace & Justice in the Philippines. It will take place from April 20-May 11 in San Francisco, Seattle, Portland, Chicago and New York.

“We want to draw attention to the human rights situation in the Philippines, so US taxpayers will know how their tax dollars are supporting the Duterte administration,” said Pam Tau Lee, Chairperson of the U.S. chapter of ICHRP.

This year’s Ecumenical Advocacy Days focused on “the uprootedness of our world,” where participants analyzed current policy and “envisioned ways to more fully and justly respond to the global and local needs of displaced communities.”

Among the dozen workshops on this subject, one addressed the “Widening Waves of Killings and Escalating Repression and Displacement in the Philippines.”

Among the panelists is Fritzi Junance Magbanua, a 29-year-old Lumad teacher and a member of the Tiruray and Maranao tribes of Mindanao.

She talked about how the Lumad tribes in Mindanao have faced a multitude of struggles, among them protecting their ancestral lands from the vested interests of mining firms. The imposition of martial law in Mindanao has worsened their situation. 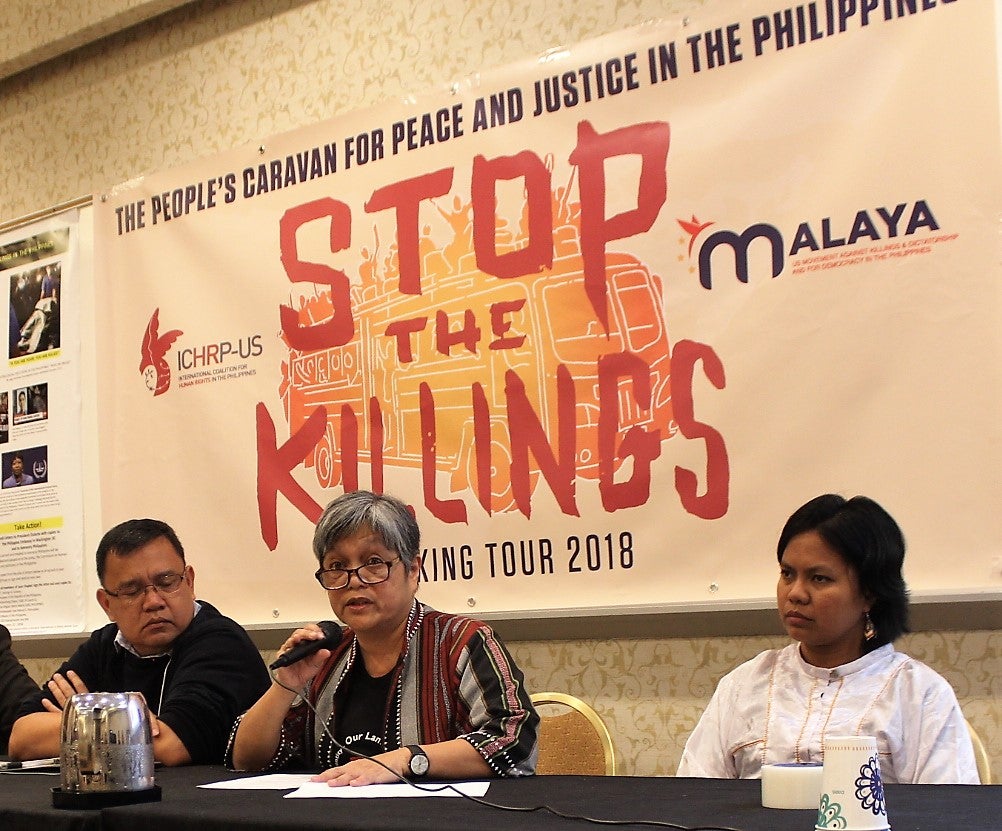 Columban Missionary John Din (left), Jill Carino of the Cordillera People’s Alliance and Lumad teacher Fritzi Junance Magbanua are part of the Peoples Caravan for Peace and Justice in the Philippines. INQUIRER/Jon Melegrito

“As a teacher, I fear for my students who have been forced out of schools because of the bombings by government forces,” she said. “But the children themselves are angry and they are on the frontlines facing the soldiers, telling their teachers not to lose hope but to continue to fight for our rights. We just want to be able to go back to our communities and build a future for ourselves.”

The extended martial law throughout Mindanao has resulted in more military bombings of communities and has created a grave humanitarian crisis with more than 325,000 evacuees. About 4,000 Lumads have been displaced.

Magbanua admits that she fears for her own life as an activist. “But your support and encouragement mean a lot, because it means we are not alone in our struggle,” she said.

Also speaking at the workshop are Columban Missionary John Din and Jill Carino of the Cordillera Peoples Alliance.  Carino talked about the “terrorist tagging of activists,” forcing them to leave their homes and making them feel uprooted. She compared Duterte’s silencing of the opposition to Marcos’ own repression in the 1970s and 1980s. “The rule of law is being replaced by the rule of force,” she said.

At the end of the workshop, ICHRP member Paul Bloom criticized the recent State Department Report on Human Rights in the Philippines as “soft, and watered down,” with no mention of the bombings and the casualties on martial law in Mindanao.