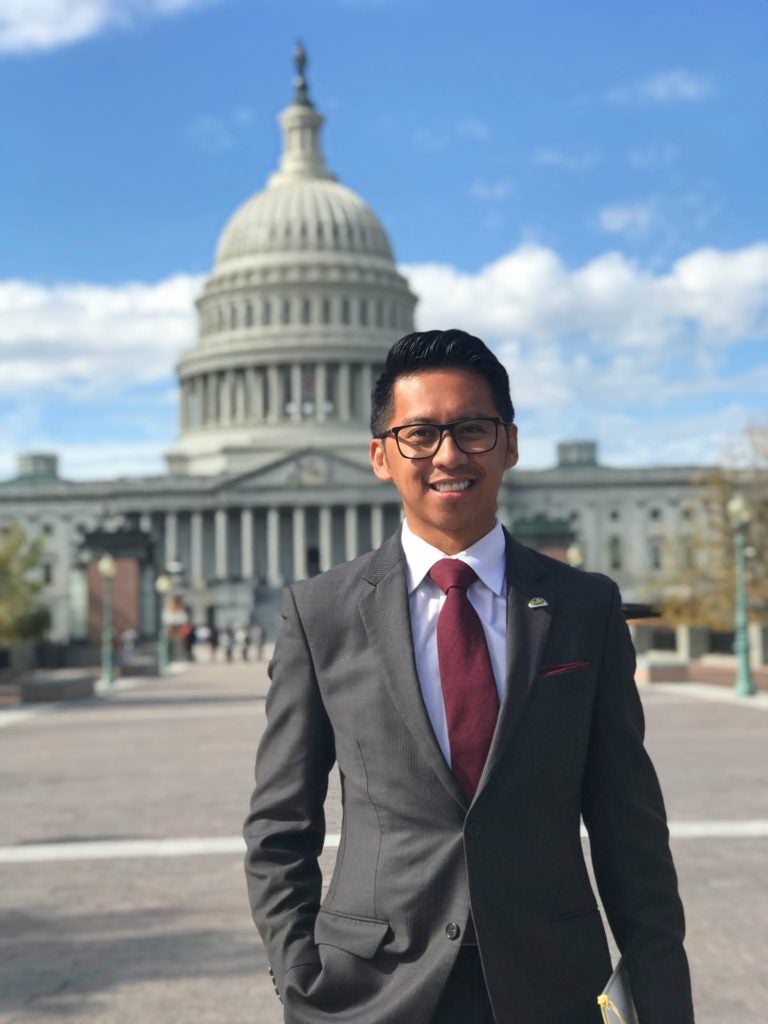 His best friend is Caucasian. His greatest dream was to be a “white kid” because he wanted to be different from his siblingswho kept on hanging out with Filipinos.

But that was a long time ago.

Of course, he never became “white.” But he has achieved more than any white guys or Filipinos can dream of in one of the most competitive industries in the United States — banking.

Meet 32-year-old Brendan Flores, the youngest vice-president of Wells-Fargo Bank based in Jacksonville, Florida. Born in the Philippines and raised in Las Vegas, Nevada, he looks every inch a Filipino, except when he starts talking. But it does not mean he is less Filipino than others.

In fact, he is now more Filipino than ever, since getting involved in the National Federation of Filipino American Associations (NaFFAA) and becoming its youngest president, elected in 2016.

While waiting for the approval of his immigration petition, Brendan was taken care of by Lola Flora, his maternal grandmother.

“My dad was in California and Mom was in Japan. Lola was my provider; my mentor; someone I looked up to. I never felt lonely. We had a pretty good life,” Brendan recalls.

Lola Flora took him to church on Sundays and did everything for his education, from signing his report cards and attending his recognition day. His grandma’s influence is a great factor in his success.

When he was in high school here in the United States, Lola Flora passed away. He was not working yet, and it was very expensive to travel to the Philippines.

“It was my biggest regret because I never got to say goodbye to the woman who raised me,” Brendan shares.

This event inspired Brendan to do better in school and work harder to succeed.

“I want to make sure that that situation will never ever happen to me again,” Brendan explains.

‘Embarrassed to be a Filipino’

Brendan and his siblings immigrated to the United States when he was nine years old. His family settled in Nevada where both his parents are working. 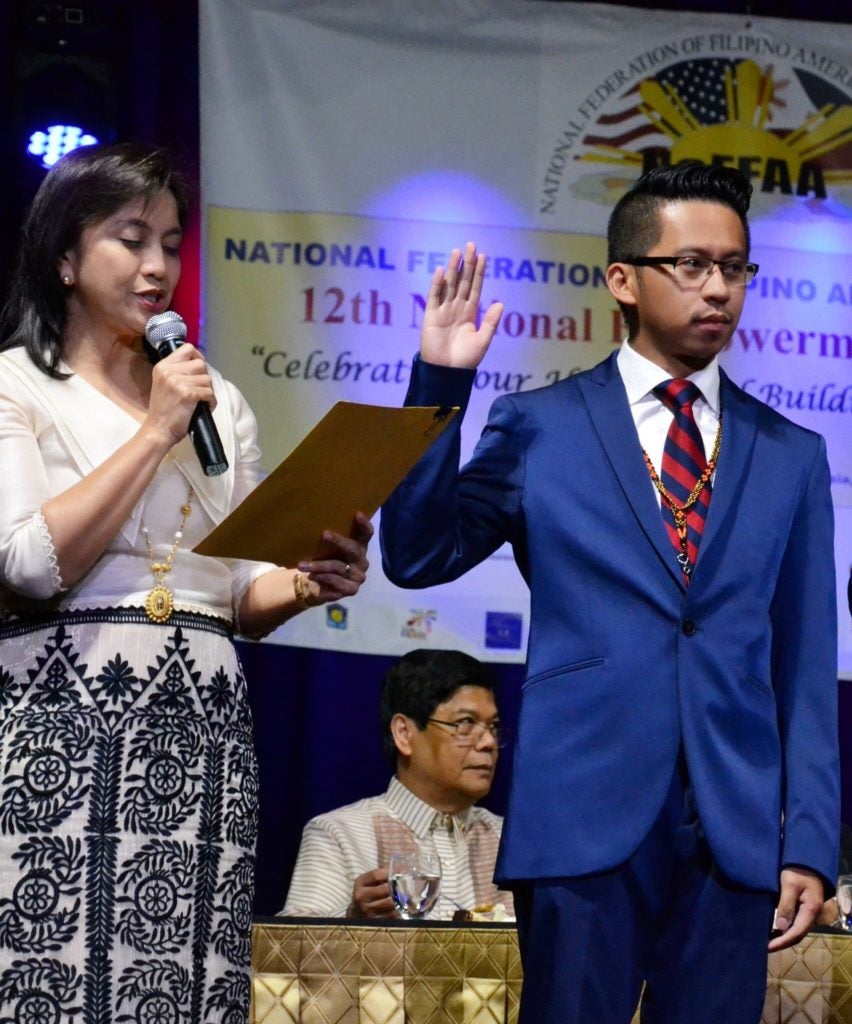 Brendan being sworn in as NaFFAA president by Philippine Vice President Leni Robredo in 2016. CONTRIBUTED

As a child, Brendan recalls that he could easily assimilate because he did not think about color or race. In his school, where the majority was Caucasian, he had a strong urge to be with his white classmates just because he wanted to be different.

“I didn’t want to be known as Fil-Am. I was embarrassed. I was Spanish or Latino instead,” Brendan admits.

When he was in high school, despite its diverse environment, Brendan did not want to join any Asian American organizations; instead, he joined Latino organization.

“I was having an identity crisis but didn’t know what it meant back then,” he says.

Though his parents asked if he was involved in any organizations or had Filipino friends, Brendan never really expressed his reasons for hanging out exclusively with white kids. He never blames his parents for not pressing him on the matter because they were busy with work.

Climbing the stairs of success

At 17, Brendan had an internship as a bank teller at Wells Fargo in Las Vegas. During the three- months internship, his dedication and hard work did not escape the trained eyes of management. Instead of taking a vacation after the internship, he became a full-time employee. Before his high school graduation he was promoted as a personal banker catering to the needs of million-dollar customers.

After graduating with a degree in business administration and management at the College of Southern Nevada and the University of Phoenix, Brendan’s success was unstoppable. Only in his 20s, he made history by becoming the youngest vice president and regional banking district manager of Wells Fargo.

But it was not an easy climb.

With almost 80% of the employees primarily white and older, who were not used to being under someone much younger, Brendan had to prove himself to be a leader in a multibillion-dollar organization.

His work did not go unnoticed. He reaped several awards from Wells Fargo, such as Star Manager, Enterprise Diversity Champion, Sales and Service National Awardee, and Leadership Saint Johns Executive Program Graduate from Johns County Chamber of Commerce, among others.

‘When the world is crazy Filipinos are having fun’

Brendan was still not active in any Filipino organizations because of negative things he knew or heard about the Filipino community. All this changed when one day, Brendan assisted a founder of NaFFAA, who was opening an account for the organization. He was invited to join NaFFAA, but it took a few years before he decided to attend a meeting.

At first, Brendan told himself that he was not cut out for NaFFAA. “All I see or do is chismis, karaoke, and ballroom dancing,” Brendan laughs.

Still, he stayed put, realizing business opportunity in socializing with organizations whose members are doctors, lawyers, and entrepreneurs. But later, his perspective changed.

“As years went by, I ended up falling in love with my culture. Filipinos are good-natured. They love to have fun despite their problems. When the world is crazy Filipinos are having fun, and what’s wrong with it?  I wanna take a shot, get back, and understand my culture,” Brendan explains.

Founded in 1997, the National Federation of Filipino American Associations (NaFFAA) is the largest national umbrella for Filipino American institutions, organizations, and individuals. Its 15 regions cover the continental United States, Alaska, Hawaii, and the Pacific Islands.

It took years of struggle for Brendan to initiate changes in an organization whose members are mostly “older people.” With his stature, Brendan could have easily encouraged young Fil-Ams to join. He became the State youth coordinator in Nevada and eventually regional and national youth chair.

“I had a title but didn’t do a lot. In a Filipino organization, young people don’t really have a voice. They never really thought of us as leaders. Something had to change,” recalls Brendan.

Brendan admits that many young professionals were starting to become disillusioned because the old members didn’t want to relinquish their responsibilities. He says that there are hundreds of Filipino organizations in America because if the leaders don’t get along they would break away and form another organization.

With the encouragement of young members, in 2014 Brendan ran as a national vice president. Although he won the popular vote, it was not enough to give him a seat because the election had an electoral college.

His desire to build a unified voice for Filipinos made him stay. In 2016, he decided to run for president and won, as the first millennial to lead the second largest Asian-American group.

Brendan proudly says that he has the most diverse leadership team: a banker; a 76-year-old VP; a Baby Boomer; a Gen Xer, and an openly gay person.

“The team is well-balanced — not pro-Democrat, not pro-Republican; not pro-anybody,” Brendan says. 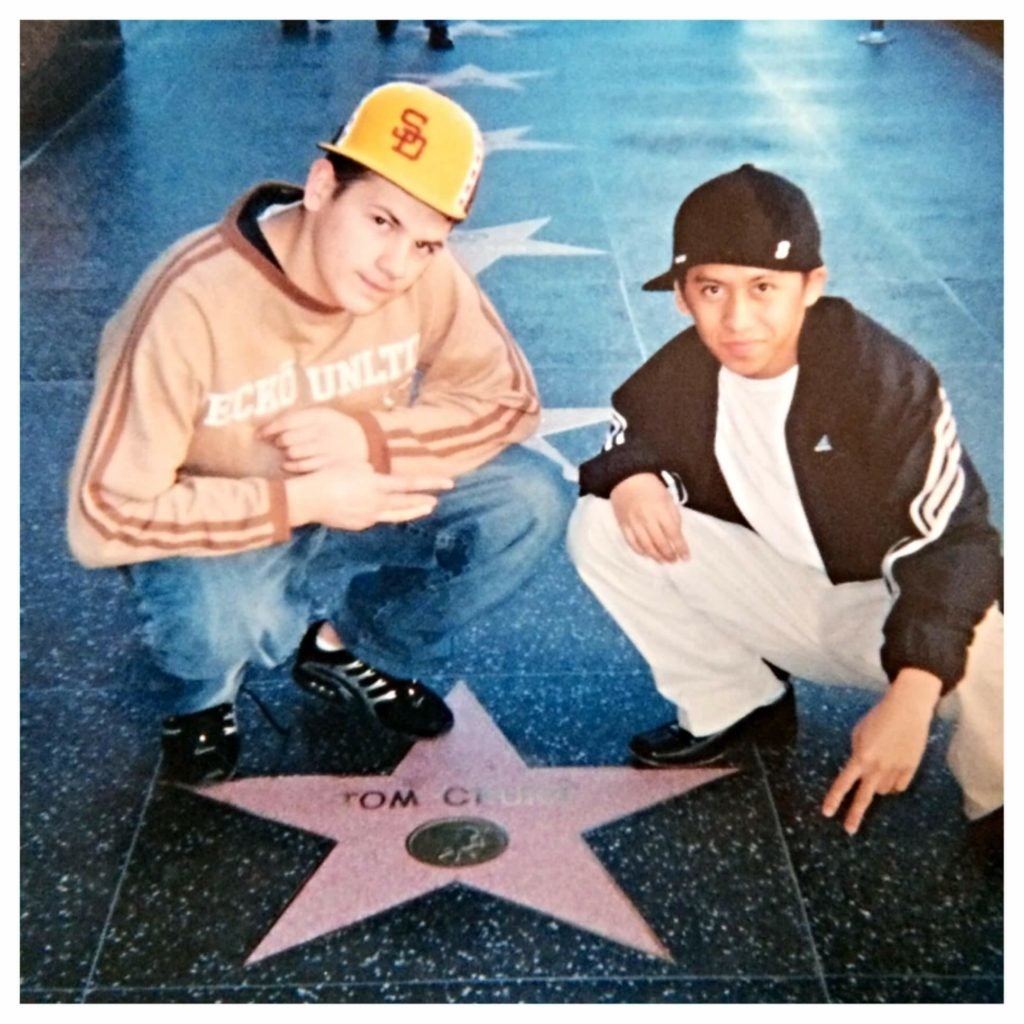 Brendan with his best friend, also a banker; taken in 2003. CONTRIBUTED

Under the leadership development, the Empowering Pilipino Youth through Collaboration (EPYC) Ambassadors Program was launched. It aims to strengthen the personal and professional development of young Filipino Americans through networking, sharing best practices, leadership-building, and mobilizing around issue-based campaigns. They are partners with ABS-CBN, Lewis Foundation, and Wells-Fargo.

Civic Engagement is also highlighted to increase Fil-Am political empowerment. It focuses on voter education voter registration, education, and protection, and voter turnout (Get Out The Vote [GOTV]).

Brendan is aware of the poor turn-out of eligible Fil-Am voters in elections compared with other ethnic groups. “We can never have a voice in D.C. if we are not registered. If we understand our civic engagement we can be a powerful voice,” Brendan says.

Aside from pressing for immigration reforms, under its national advocacy focus, NaFFAA was instrumental in the passage of the Congressional Gold Medal for Filipino WWII veterans.

“NaFFAA is focused on all ages. My goal is not to get rid of the old people and bring in new. I want to hold them together. Old leaders will not be here forever; let’s work side by side,” Brendan says.

Through all these, he always remembers the wise advice of Lola Flora: show respect and courtesy, and treat people the way you would want to be treated.

“I understand the importance of respecting the elders and of having a proven track record. It also pays to be patient,” Brendan says.