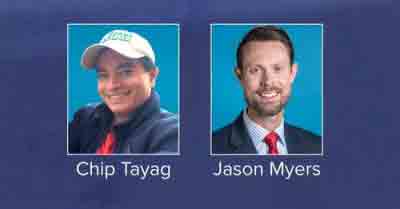 Witnesses hailed Tayag, a pilot for more than 20 years, as a hero for determinedly maneuvering his failing helicopter away from Interstate 17 freeway traffic, avoiding more potential victims of the crash. He is survived by his wife, Kerry Tayag.

“Because of his heroic acts, there were no further injuries or vehicles on the highway involved in this incident,” Charlotte-Mecklenburg Police Chief Johnny Jennings.

Tayag came to WBTV in 2017 as an ENG pilot operating Sky3. He was a well-trained pilot and was known at the Total Traffic and Weather Network for being one of the best pilots, conscientiously prepared and highly organized, according to WBTV. He had flown the station copter for more than 2,000 hours.

The station added Tayag had been with WBTV since 2017 operating the helicopter and has flown it for over 2,000 hours in that time.

Jason Myers, a  North Carolina State University meteorology graduate started his broadcast career at KRBC-TV in Abilene, Texas, and went on to work at WRIC-TV in Richmond, Virginia, and was most recently the Chief Meteorologist for ABC 36 in Lexington, Kentucky.

The National Transportation Safety Board and Federal Aviation Administration are investigating the crash, which happened near Interstate 77 in south Charlotte.