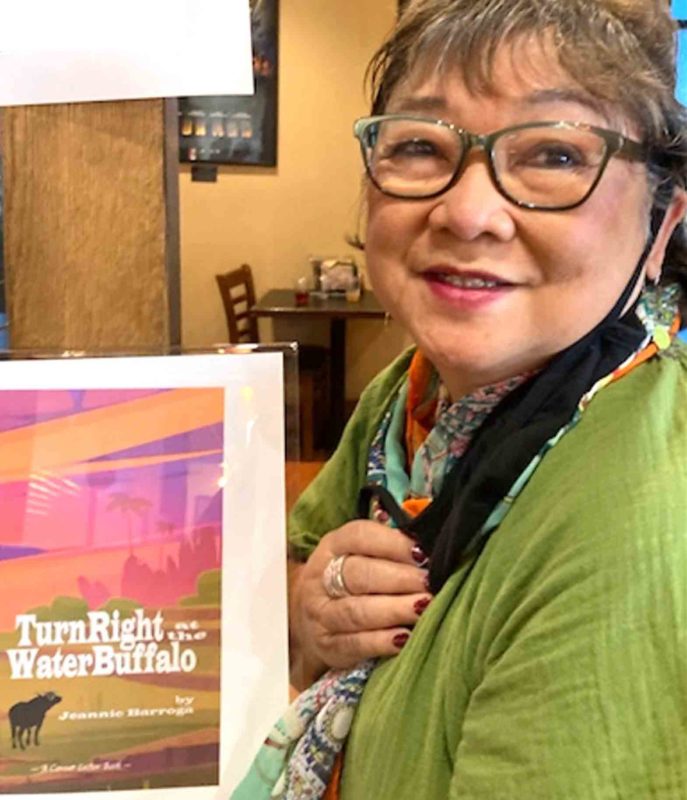 SAN FRANCISCO — In Filipino American Jeannie Barroga’s just-released novel Turn Right at the Water Buffalo, Reena, who has lived away from the Philippines for years, has manipulated her “Americanized” daughter, Lainie, to attend their 1989 family reunion in Leyte province.

“My mother had me promise that I’d write her story,” Barroga said. “Reena’s background is filled with love affairs, one leading to marriage and relocation to the United States. With ambition like that of Scarlet from Gone With the Wind, she is viewed by the people from her hometown Ormoc as driven and steely. A harrowing incident during the shelling of Ormoc affects the way Reena handles her relationships with family and friends.”

It took Barroga more than 20 years to write this book. “Since the 1989 trip 32 years; since first drafts, 22 years; while recovering from two hip replacements, nearly three years; and released to the public, 11 months ago.”

A prolific playwright and theater maker, she has more than 50 plays under her belt. Barroga founded a support group for playwrights called Playwright Forum, which later merged with theater company TheaterWorks, where Barroga served as literary manager for more than 15 years.

Barroga’s recent theater credits include Buffalo’ed, about the African American soldiers sent to the Philippines during the Philippine-American War and Banyan, a Wizard of Oz-inspired allegory on the effects of the Sept. 11 attacks on a Filipino American corporate worker.

Her play Walls is included in Unbroken Thread: An Anthology of Plays by Asian American Women.

“I resumed novel writing after 40 years of playwrighting. It took me that long to clamp down on disciplined writing,” she said with a wink.

She counts among her inspirations “Madeleine L’Engle, Nicola Tesla, American musicals, complicity, the 1950s, The Wizard of Oz, Dashiell Hammett, the Milwaukee Braves, and Hui Playwrights” when she writes about women, art and politics.

She is currently working on revisions to her novel, Marked, about a detective who is aided by her cat and paranormal clues.