Twitter is under new management and has undergone unusual changes ever since. On November 13, 2022, CEO Elon Musk fired an employee via tweet.

It started when Musk posted on Twitter that the mobile app takes too long to load the homepage. In response, software engineer Eric Fronhoefer corrected the claim.

Fronhoefer and Musk exchanged public messages until the latter stated, “He’s fired.” Afterward, the engineer confirmed he had lost access to the company’s internal systems. 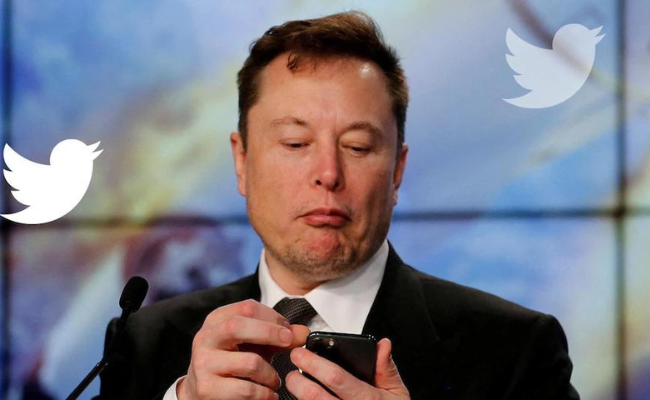 On Sunday, Musk tweeted an apology saying, “Btw, I’d like to apologize for Twitter being super slow in many countries. App is doing >1000 poorly batched RPCs just to render a home timeline!”

In other words, the CEO implied that the app links to too many servers. As a result, the mobile program cannot open the homepage quickly.

Staff Software Engineer Eric Fronhoefer called out Musk’s alleged mistake and said, “I have spent ~6yrs working on Twitter for Android and can say this is wrong.”

Musk responded, “Then please correct me. What is the right number?” Later, he added, “Twitter is super slow on Android. What have you done to fix that?”

Two hours passed, and the engineer retorted, “We have done a bunch of work to improve performance, and we found that it correlates well with increasing UAM and Ad spend.”

“Agree, there is plenty of room for performance improvements on Android. However, I don’t think the number of requests is the primary issue.” 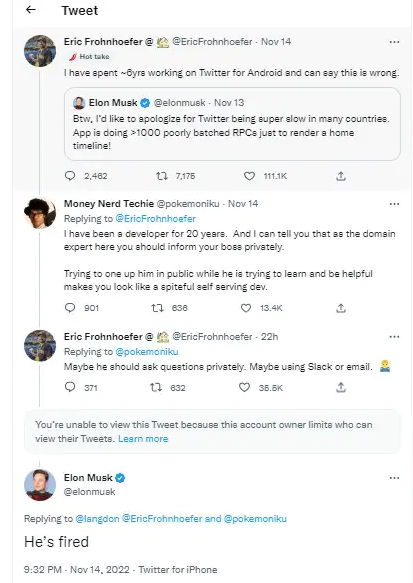 Later, Frohnhoefer did admit that he was “definitely stupid” to call out his boss publicly. He also shared a photo of his Macbook that shows that the “Administrator” locked his laptop. That implies that Fronhoefer lost his job at the social media company.

On the other hand, Elon Musk commented further on his argument with Fronhoefer. The CEO said, “I was told ~1200 RPCs independently by several engineers at Twitter, which matches # of microservices. The ex-employee is wrong.”

Elon Musk fired an employee using a tweet. In response, many people felt shocked about how he let go of the software engineer.

Yet, other companies have fired workers via similar methods. For example, some businesses send emails to individual employees, while others use Zoom.

In response, you should develop your skills to remain competitive in the job market. You can begin by reading more tips from Inquirer USA.