GOP attorneys general back citizenship question on US census

GOP attorneys general back citizenship question on US census 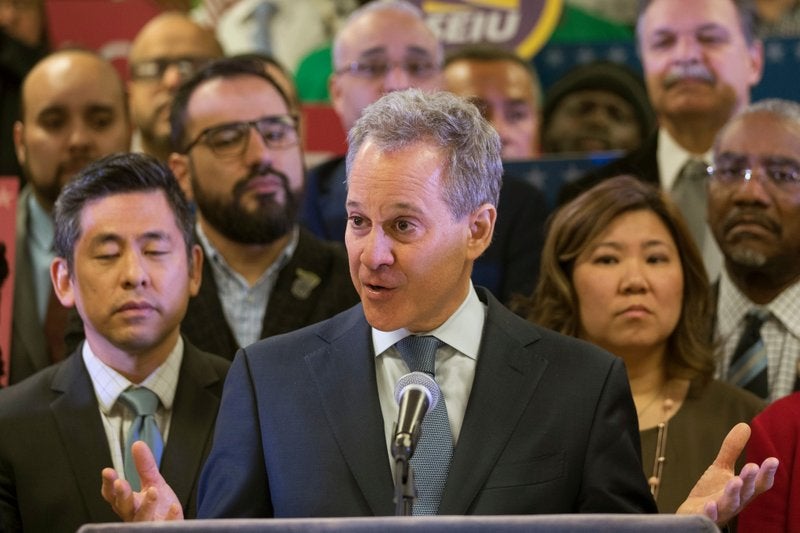 NewYork Attorney General Attorney General Eric Schneiderman speaks during a news conference in New York to announce a new lawsuit by 17 states, the District of Columbia and six cities against the U.S. government, saying a plan to add a citizenship query to the census questionnaire is unconstitutional. AP PHOTO

A Trump administration plan to ask people if they are U.S. citizens during the 2020 census has prompted a legal uproar from Democratic state attorneys general, who argue it could drive down participation and lead to an inaccurate count.

Yet not a single Republican attorney general has sued — not even from states with large immigrant populations that stand to lose if a census undercount of immigrants affects the allotment of U.S. House seats and federal funding for states.

In fact, many GOP attorneys general had urged Trump’s census team to add a citizenship question.

“We always are better off having a more accurate count of citizens versus non-citizens. I see no downside in this,” said Texas Attorney General Ken Paxton, vice chairman of the Republican Attorneys General Association.

The diverging views of top Republican and Democratic state attorneys highlight how even the most basic data collection decisions can quickly split along partisan lines amid the intense debate about immigration policies.

Concerns among immigrants have risen as President Donald Trump’s administration has cracked down on so-called sanctuary jurisdictions, increased arrests by federal immigration officers, called the National Guard to the border with Mexico and sought to limit travel to the U.S. from certain predominantly Muslim countries.

U.S. Commerce Secretary Wilbur Ross announced last month that the 2020 census distributed to every U.S. household will include a citizenship question for the first time since 1950.

He said the question was needed in part to help the government enforce the Voting Rights Act, the 1965 law that was intended to protect the political representation of minority groups.

He said it will provide a more accurate tally of voting-eligible residents than is currently available from a smaller sampling survey that includes the citizenship question.

In a letter explaining his decision, Ross said the U.S. Census Bureau estimated that as many as 630,000 additional households might not respond if a citizenship question is included. Yet he acknowledged the administration did not know what the actual consequences might be because it hasn’t tested the change.

The nation’s only dress rehearsal for the 2020 census, currently taking place in Providence, Rhode Island, does not include the citizenship question on the survey forwarded to residents. Nevertheless, Ross determined the benefits of including the question outweigh any concerns.

California Attorney General Xavier Becerra, a Democrat, filed a federal lawsuit immediately after Ross announced the question would be added. The nation’s most populous state also has the highest number of foreign-born residents, most of whom are naturalized U.S. citizens or hold some other legal status.

Last week, New York Attorney General Eric Schneiderman led a coalition of 17 Democratic attorneys general, the District of Columbia, six cities and the bipartisan U.S. Conference of Mayors in filing a second federal lawsuit. They contend the citizenship question will deter participation and illegally inhibit the Constitution’s requirement for an “actual enumeration” of residents.

A third lawsuit was filed this past week by a group of seven Maryland and Arizona residents who say adding the question could lead to an undercount that could diminish federal funding and congressional representation for their states. The Constitution requires representation in the U.S. House to be based on a count of the total residents in each state, not just citizens.

The census, undertaken every 10 years, also is used to determine how much money to distribute to local communities through various federal programs.

“If we don’t count all the people who live in our city — all the residents we have — it could mean that our community doesn’t get our fair share of moneys or aid,” said Steve Adler, mayor of Austin, Texas, and a Democrat who is on the board of the U.S. Conference of Mayors. “It could also mean that we don’t get the representation in government at all levels. The impacts could be huge.”

The George Washington University Institute of Public Policy recently analyzed how a hypothetical 1 percent undercount beyond the figures reported in the 2010 census would have affected 2015 federal funding for Medicaid and several other social programs in each state, assuming the undercount occurred only in that state.

The largest financial hits would have been to the Republican-led states of Texas, Florida and Ohio, the swing state of Pennsylvania and the traditionally Democratic state of Illinois, the report found. Democratic-led California and New York would not have been affected because their Medicaid reimbursement rates already are at minimum levels.

Estimates of those living in the U.S. illegally range from 11 million to a little over 12 million people.

Census data is not shared with immigration enforcement authorities. Yet immigrant advocates believe a citizenship question could discourage even some who are lawfully present from responding, partly because of fears the government could track down relatives living in the U.S. illegally.

The U.S. has about 44 million residents who were not citizens at birth, comprising 13.5 percent of the total population, according to the most recent Census Bureau information. More than half of all immigrants live in California, Texas, New York or Florida.

Minority Democrats in the Arizona Legislature also urged GOP Attorney General Mark Brnovich to join the lawsuit. But his spokesman said that won’t happen, just as he refused to sign onto the Republican letter urging the question be included.

“We have concerns this issue has been overly politicized,” Brnovich spokesman Ryan Anderson said in a statement.

The letter from Republican state officials said a census citizenship question could help minority communities by allowing those drawing legislative districts to ensure there are enough voting-eligible citizens in a particular district for minorities to be able to elect a candidate of their choice under the federal Voting Rights Act.

Citizenship data from the Census Bureau’s annual American Community Survey has been sufficient in past court cases to meet the standards of the Voting Rights Act, said Vanita Gupta, who oversaw the Justice Department’s civil rights division during the final years of President Barack Obama’s administration.

That survey is sent to fewer than 3 percent of U.S. households.

If a citizenship question is asked of every U.S. household, “you would basically end up with a completely inaccurate census because of the concerns around depressed participation,” said Gupta, who now is president and chief executive of the Leadership Conference on Civil and Human Rights.