Why we’re in the US:  All that is at stake in today’s voting

Why we’re in the US:  All that is at stake in today’s voting 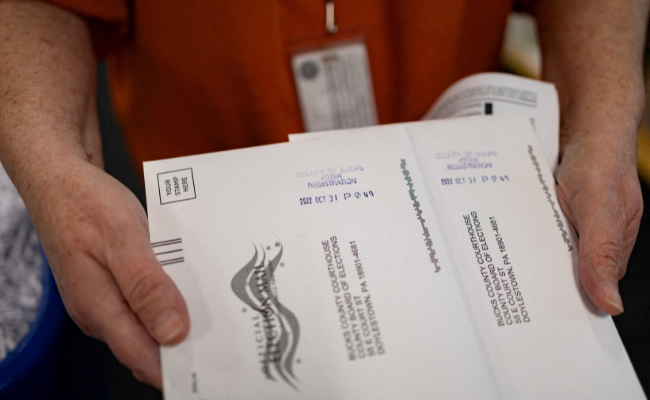 “On Demand” absentee or mail-in ballots are time stamped after being filled out in Doylestown, Pennsylvania, U.S. October 31, 2022. REUTERS/Hannah Beier/File Photo

Filipino Americans  know why our families are here. It wasn’t just economic opportunity. It was also for the democracy.

Whether you or your family originally came on a boat, or a plane, or after a decades long wait for visa approval, we all have our story of when and why we came to America.

Generations of stories. Think of that.

All that is at stake with the vote that takes place on election day.

In the final push to save our democracy, you’ll have to get by all the flyers and campaign ads trying to push misinformation and disinformation.

In the last few days, I’ve seen ads with a kind of generic format that shows (Name of candidate) is “too extreme,” or “too radical.” Or is bigoted and racist.

All of them emotional attacks to motivate you to go to the polls with a passionate anger. You should vote. Just don’t get used.

On the East Coast, some Asian American voters have received flyers that denounce “white racism.”

“White racism?” That’s not white folks like the KKK exhibiting racism toward blacks and others. It’s “white racism” as in alleged bigotry toward whites by Democrats, progressives and people of color.

Doesn’t make sense and contorts context and truth. But the flyer is going out to Asian American voters spreading unsubstantiated claims from right wing media like how people will be hired and fired “according to their skin color.”

And then comes the highlighted phrase: “Whites and Asians Need Not Apply.”

It bunches Asian Americans with whites in an attempt to stoke our emotions so that in a tight campaign between Democrats and Republicans this becomes a tie-breaker.

It’s the work of America First Legal, a right-wing org founded by former Trump immigration specialist Stephen Miller, with a stated intention of being the right-wing answer to the ACLU.

Spreading lies as truth under the guise of free speech is the AFL’s answer to the ACLU? Beware of it.

It’s all part of a campaign by Miller’s group who has especially been targeting battleground areas like Georgia the last few weeks. In the south, the claim was Vice President Kamala Harris was giving preference to people of color for Hurricane Ian relief. Not true.

The use of misinformation has come up across the country.

Chen, whose grandmother escaped communist China to Taiwan, is an Ivy league-trained naval reserve officer, with political experience serving as head of a community college district.

Chen is well qualified serve in the House.

Steel, a Korean American married to a white Republican operative, was called out for her deceitful ploy and subsequently lost the endorsement of the Los Angeles Times.

Steel’s tactic is particularly abhorrent because it’s an Asian on Asian manipulation. But this is the nastiness you’ll see in a close race in the democracy we’ve become.

To get your vote, they’re using the little lies, when the big lie isn’t enough.

But the Big Lie endures

Over the weekend, the former president, No. 45 — responsible for the scapegoating of Asian Americans as the cause of the pandemic, which led to thousands of hateful transgressions on our community–was at a rally in Florida.

“The election was rigged and stolen and now our country is being destroyed,” the former president said continuing to run on the lie that has been disproved at every level.

As we all know, the election was not rigged, or stolen. But 45 was modestly not taking credit for destroying our faith in a system he has helped to erode.

But the “denier” theme has successfully infected the Republican Party, which has as many as 300 candidates on board in these mid-terms who are verifiable “election deniers.”

And that is the real fear, that if they get elected, we’ll have a strain of the Jan. 6 infection within our government ready to wreak a kind of chaos that could implode our democracy from within.

Already in key battle ground states like Pennsylvania, Michigan and Wisconsin, there are efforts to question the integrity of every ballot on any technicality.

We vote on Nov. 8, but thereafter comes litigation, and the challenge of every vote until the deniers insist on their victory.

That’s the kind of democracy we seem to be in now. Don’t give up hope.

Vote. Disregard last minute ads on TV/radio. On social media. And in your mailbox. Don’t get bogged down by misinformation.

You should know the truth by now about your candidate of choice.

Most importantly, think about why you are here.

Asian Americans more than anyone else know the reason why we came to the U.S. in the first place. And why we value democracy so much.

Asian American Filipinos know why they fled the Philippines and the martial law declaration of Marcos in the ‘72.

Now is the time to remember your family’s origin story to America. What they left behind and why. And what they dreamed of when they arrived here.

Don’t kid yourself. All that is at stake with the Nov. 8 vote.

Emil Guillermo is a veteran journalist and commentator. He wrties a column for the Inquirer.net’s North American Bureau.