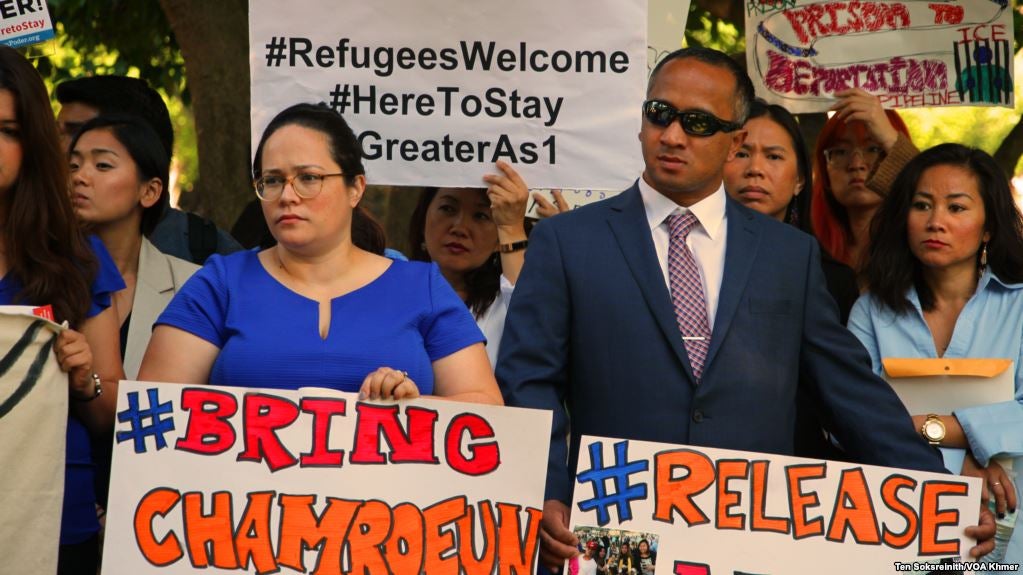 Jenny Srey (left) stood next to her husband, Ched Nin, who has received a waiver from the U.S. District Judge in Minnesota to reunite with his family after his deportation order was canceled, June 28, 2017. Ten Soksreinith/VOA Khmer

The filing follows the deportation of 43 Cambodians on April 4, the biggest group to be removed in just one day since the repatriation of Cambodian nationals began over a decade ago. The FOIA request was submitted by Asian Americans Advancing Justice | AAJC, the Southeast Asia Resource Action Center (SEARAC), VietLead, and more than 60 other organizations.

The FOIA request demands ICE release all records related to the arrests, detention, and deportation of Southeast Asian Americans in the past 20 years. Advocates will use this information to assist affected communities and target their access to legal services.

John C. Yang, president and executive director of Asian Americans Advancing Justice | AAJC, said, “What has often gone unseen is that Southeast Asian American refugees are one of the most likely groups to be deported for old criminal convictions. Many who are threatened with deportation are providers for their families here in the U.S. It is vital that we receive these records from ICE to allow us to help affected communities and advocate for real policy change.”

Hundreds of Southeast Asian American refugees are in danger of being deported this year, and more than 16,000 community members have received final orders of deportation despite most refugees being lawful permanent residents.

Quyen Dinh, executive director of SEARAC, said, “The mass detention of Southeast Asian community members this year has had a devastating impact on so many families. The trauma of deportation in the Southeast Asian refugee community is compounded by historical trauma of war, genocide, and mass displacement. For years we have been trying to advocate for our community without adequate data on detention and arrest statistics specific to the Lao, Hmong, Cambodian, and Vietnamese community. We hope that this FOIA request will release the information we need to shed light on the disproportionate impact of mandatory detention and deportation on our families.”

Nancy Nguyen, executive director of VietLead, said, “This is an important step in our community holding ICE accountable. We have to remove the smoke and mirrors from their operation.”

The groups said they are committed to holding ICE accountable and making sure affected communities receive the services they need to prevent more families from being torn apart.