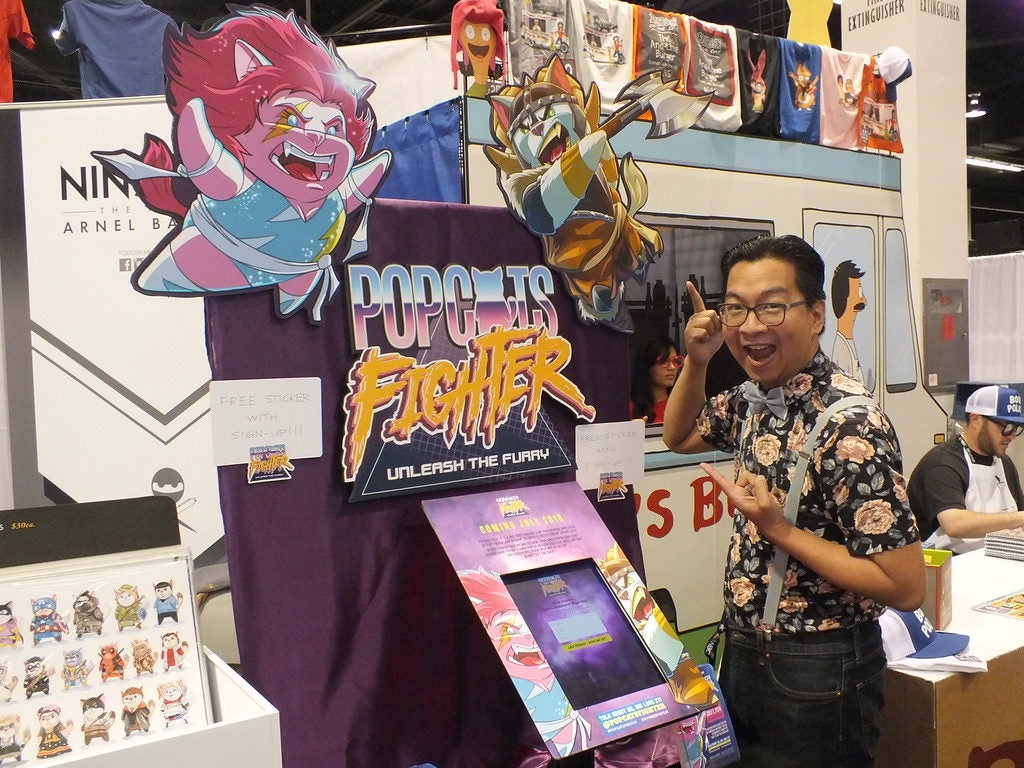 ANAHEIM, California — What is WonderCon?  The same folks that put on the gigantic annual San Diego Comic Con International (SDCC), are responsible for this one too. But WonderCon is less intensive. It still has popular media and star content and panels, but doesn’t yet require attendees to stand for hours in long lines, or camp out to get in.

A comics themed T-shirt booth, on closer look, has Asian food depicted all over the merchandises. Owner Erwin Osias, who attends many outdoor pop/art fairs, like the Burbank Arts Festival, just liked the idea as a foodie and enjoys being “weird about food.” He has eaten everything he has portrayed like sushi, poke, boba, pho and the Pinoy items on the Pulutan T-Shirt, which has comic portrayals of pork lechon, balut, grilled squid, and beer. 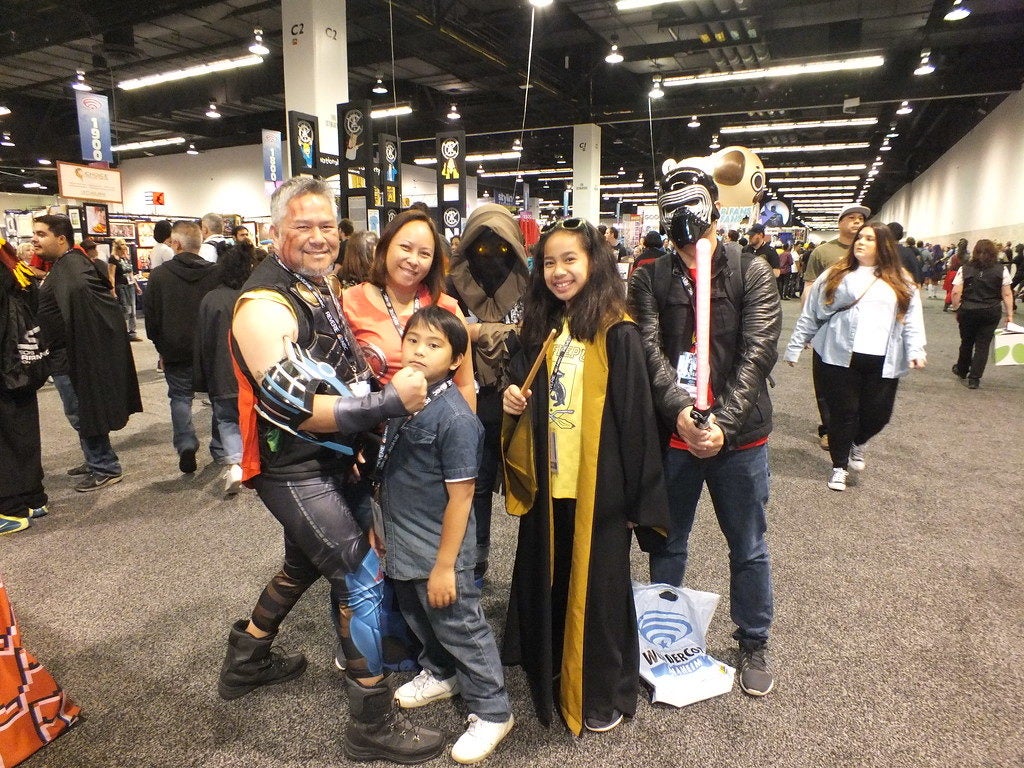 Osias even boasted he didn’t have to be “tricked” to eat “chocolate meat,” aka dinuguan, as a youngster and has also acquired a taste for kalding (goat). Another project on his backburner is creating a Filipino Action detective comic tentatively titled “Joji 33.”

With his art background from a degree in Entertainment Design, Osias says it’s been a long journey with lots of hard work. He recommends aspiring artists to find their style and throw in their own voices into it.

Osias has been doing and selling his art for four years now and is a freelance storyboards artist for live action and animation media. His latest contribution was working on the storyboards for the feature film “Traffik,” coming out April 20, starring Paula Patton and Omar Epps. You can view his work on his website www.Etonomous.com.

A comic con favorite and fellow UC Irvine Kababayan Alumni, Patrick Ballesteros and his lovely wife, Kay, were in their busy booth offering his cutesy kid portraits of characters from popular movies, comics, and animation. 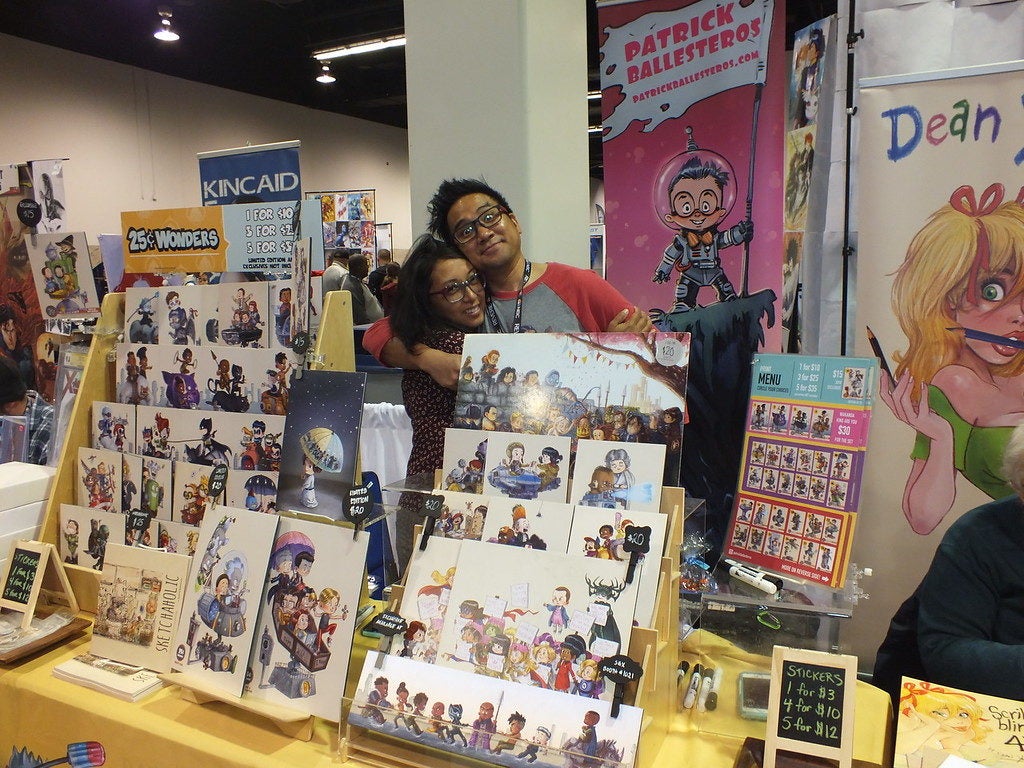 UC Irvine Kababayan alumni Patrick Ballesteros with his business partner wife, Kay, hits the Wonder Con exhibit floor running with his 25-cent-wonder artworks. They’re so popular with attendees that he often runs out of some of his works. INQUIRER/Florante Ibanez

From his blog space he says of himself: “I am an illustrator and designer with a passion for creating art that brings you back to being a kid. Being a product of the ‘80s, my inspiration stems from my childhood and it is those inspirations that I inject into my illustrations and designs. I strive to have as much fun with my work as humanly possible to create a sense of nostalgia.”

Ballesteros has also generously donated his signed artwork to the “Cancer Gets LOST” online charity auction, opening on August 1. You can visit him at the next gigantic San Diego Comic Con International, July 18-22, 2018 in Artist Alley space DD-08 or at www.patrickballesteros.com

At the Nijabot small press booth, Arnel Baluyot talked about drawing since he was 9 and his formal training in art school (where he met his wife, Estefania) in graphic design. He has used water colors and acrylics, but now mostly does digital. 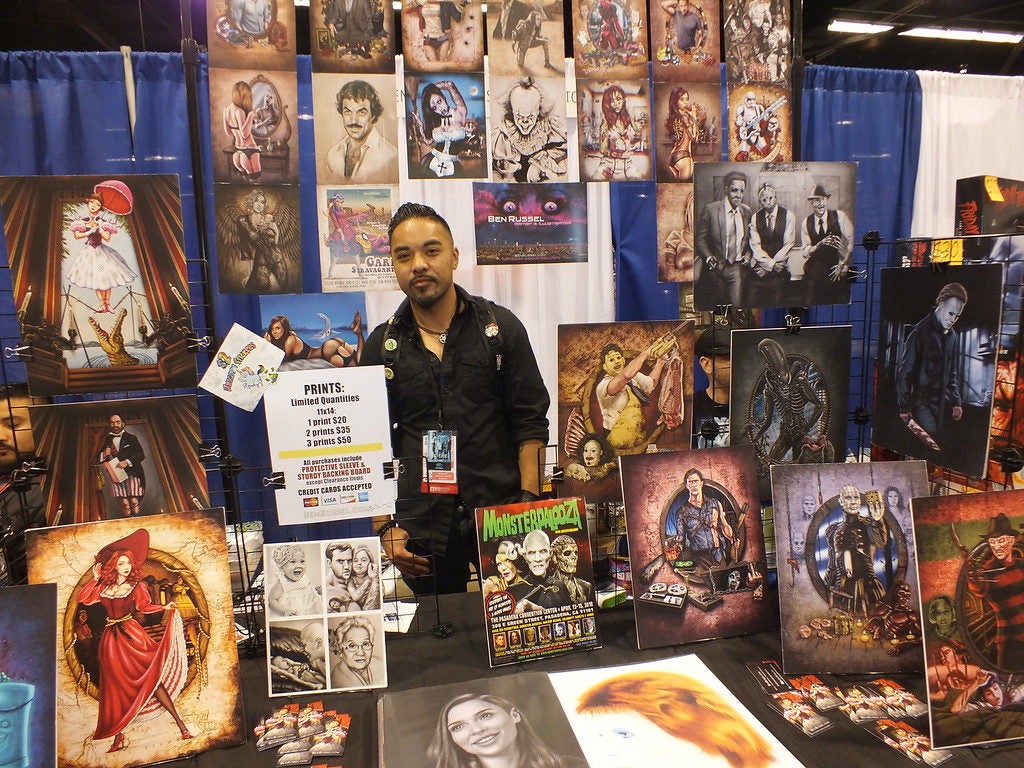 Fil-Am Ben Russell has been working as a full time artist since 2011. INQUIRER/Florante Ibanez

As a full-time artist Nijabot used to attend “A LOT” of Cons early in his career, from the New York Comic Con to Seattle’s Emerald City Con, but as he gets older finds he just wants to attend the comic cons he enjoys, including WonderCon. But he’ll still brave the crowds at SDCC in July.

Nihjabot just started promoting at Seattle’s Emerald Con his newest project “PopCats Fighter! The Game,” a card game modeled after the Street Fighter video game but with cats. His Kickstarter campaign will begin July 1, 2018. You can find out more about it at www.theninjabot.com

Fil-Am Ben Russell has been working as a full time artist since 2011. “But as far as artwork I been doing it since I was a kid, kindergarten. As far as formal training, I was all honors in art in high school, entered San Jose State University under a scholarship in art animation illustration program, dropped out of that program, got a bachelor’s degree in film and a minor in studio art.”

He tries to get into all the cons and horror cons, whatever he can get into. “I have a YouTube channel coming up, with film reviews, movie news, a lot of geek talk, I’m also working on a self-help book, integrating art creativity with personal self-care, being inspirational, how you can be the best, how you can live the life of freedom, how to maximize your potential, self-help, GO FILIPINO!.” http://www.benrussel.com

Meanwhile, the panel titled “How to be a Geek in the Workplace” (“GEEK” signifying Greatly Educated Emitter of Knowledge) was designed for “those who are geeks working among normies who have little to no understanding of the rather special geek subculture.” Chaired and organized by college career advisor, Joy Marie Menzel, it featured selected panelists from various professions including Jose E. Carenas (art director for Liquid Advertising), comic book creator Ryan Tumaliuan (toy designer for Universal), Mikaela Ibanez (management assistant, City of Los Angeles), and Paola Carbajal Kerr (assistant complex coordinator, CSUDH). The panel discussed how to create a work/geek balance. The WonderCon Panel “How to be a Geek in the Workplace” features two Filipinos (left to right) Mikaela Ibanez, Ryan Tumaliuan, and other panelists, Joy Marie Menzel (organizer), Paola Carbajal Kerr, and Jose E. Carenas. All career professionals by day and GEEKS in their time off. INQUIRER/Florante Ibanez

With two Fil-Ams on the panel it made for an interesting discussion with many questions from the audience concerning exposure through social media accounts, tattoos, separating work from say instance cosplay and viewing professional work as a means to fund their geek expenses.

Supporting the artists on the exhibit floor was a Fil-Am printing business SGX PRINT, that especially caters to the high-quality work demanded by artistic professionals. In the graphics and printing business for over 15 years, owner Edwin Uyan is also an artist who started off in graphic design and before going into printing, giving him insights on what artists are looking for. Artists like Dustin Nguyen and Patrick Ballesteros became clients.

WonderCon was a great experience for attendees, presenters, and artists. A whole Fil-Am family was seen all decked out in cosplay. Most memorable was a cosplayer as “RUFIO” from the movie “Hook,” which starred a then very young Fil-Am rising star, Dante Basco. Fans don’t forget.