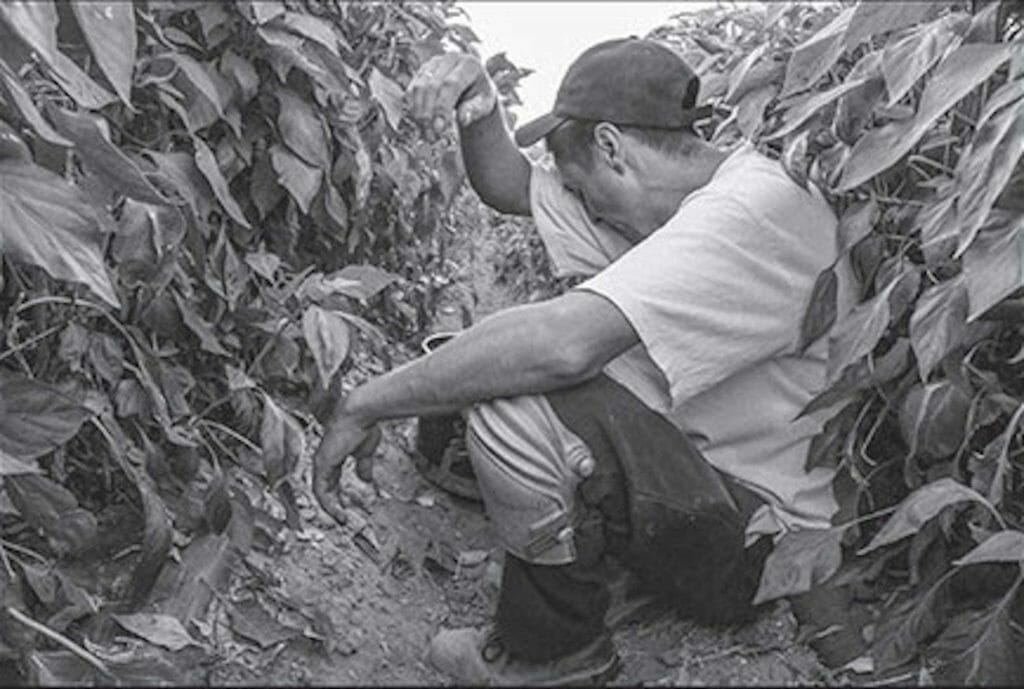 The photographs focus on the daily lives of farmworkers and their families, including Filipino immigrants and in particular indigenous Mexican migrants. DAVID BACON

Documentary photographs by journalist-photographer David Bacon, taken in the course of the pandemic and the past two years’ heat dome crises in California’s agricultural San Joaquin Valley, are on display at the Leo & Dottie Kolligian Library, University of California Merced, 5200 N. Lake Road, Merced.

Rural poverty is endemic in the San Joaquin Valley, the most productive agricultural area in the world. That poverty led to Covid infection rates far exceeding, per capita, any urban area in California.  Rural communities enduring the pressure of low wages and bad housing became coronavirus hotspots.

The photographs focus on the daily lives of farmworkers and their families, including Filipino immigrants and, particularly, indigenous Mexican migrants, who did the essential labor that ensured that food left the field to supply supermarkets and dinner tables.

They also show that while COVID created enormous risks and problems, in many ways people lived in conditions that existed long before the pandemic began.

In these images, farmworkers appear masked and exhausted as they pick grapes, pluots and persimmons.  The series documents the crisis in rural housing, and the efforts of local communities to build homes using self-help projects.

“Haunting night photographs taken in Fresno show the streets of San Joaquin Valley’s largest city empty except for people sleeping on sidewalks, or working in taco trucks into the early hours of the morning.  Indigenous farmworkers labor as irrigators in 114 degree heat in the sun all day, while crews pick and toss watermelons into trucks—one of the most physically demanding jobs in agriculture. The growing number of H-2A guestworkers are shown both as they harvest cantaloupes in the harsh temperature, and the rundown motels where they’re housed,” the exhibit press release stated.

This exhibition consists of 67 black and white photographs and oral histories giving their context.  It is a continuation of previous projects that document the lives of indigenous farmworker communities, including Living Under the Trees and In the Fields of the North. In May, 2021, the California Newspaper Publishers Association gave its first place awards to this series of images, and the Los Angeles Press Club gave it a first place in the Southern California Journalism Awards in 2022.

The photographs were produced as a cooperative effort with the Binational Front of Indigenous Organizations (FIOB), the Central Valley Empowerment Alliance, California Rural Legal Assistance, the Leadership Counsel for Justice and Accountability, and the United Farm Workers.

The images are used by partner organizations in campaigns for immigrant rights and better working and living conditions.  Part of this effort includes using the exhibitions to organize dialogues within these communities about indigenous identity and culture, and ways to advocate for equality and social justice as migrant communities in the U.S., opposing an abusive and dysfunctional immigration system.