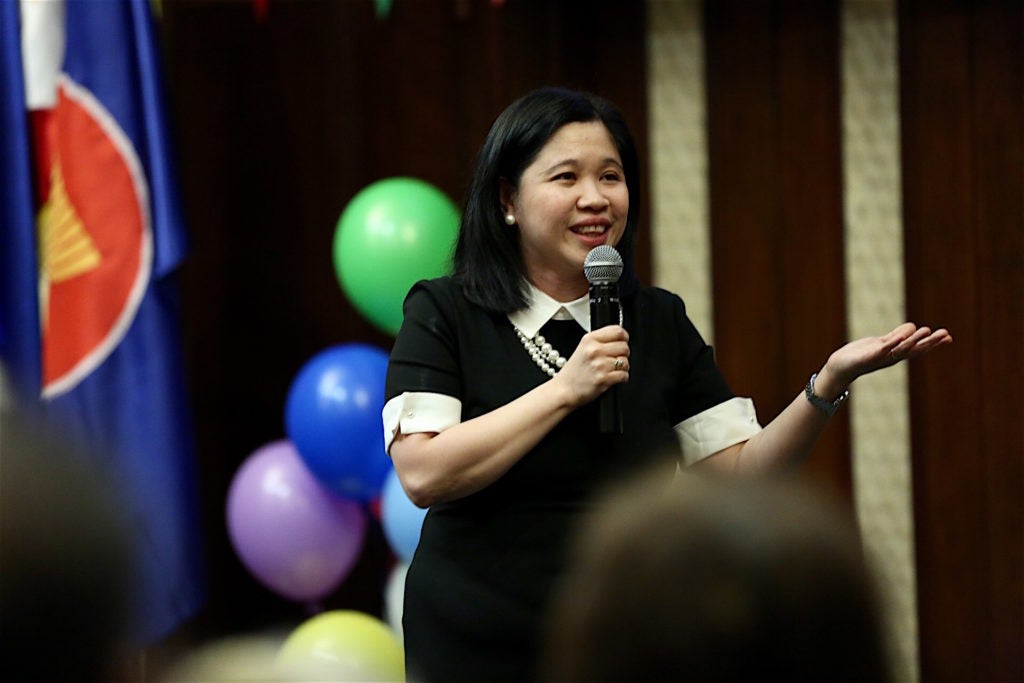 NEW YORK – In a Fiesta-like atmosphere at the Kalayaan Hall of the Philippine Center, Consul General Theresa Dizon-de Vega was noticeably having mixed emotions – somewhat bittersweet – in bidding her beloved community a fond farewell during the Appreciation Night on February 28. From the center stage where she stood tall, she expressed her heartful thanks and appreciation.

“This night is for you. This is an appreciation night for what every single person in this room has contributed – large and small – with various levels of impact to the community,” she said.

“But most especially in representing the country, our culture, our mixed heritage and our ability to be inclusive, to engage, to be diverse and to share. Most of all to be empathetic in whatever profession and whatever work we do.”

The Hall was packed with people coming from all over the tri-State area and the boroughs of New York City. To name a few: Maria Mamawal from Queens; Ronie Mataquel from the Bronx; Carol Tanjutco, Roosevelt Island; Lambert Parong, Brooklyn; Stevenson Van Derodar, Manhattan; Helen Kwong, Long Island; Rory Nazareno-Ocampo, Staten Island; Steve Parrado, Fairlawn, New Jersey; Cherry Mames-Smyth, Connecticut. Even Ernie Gange who hails from far-flung Pennsylvania was present. These were people who knew the Consul General and most likely she knew them as well.

It could be said that the event was a showcase of the Filipino community’s love and respect for the Consul General whom they described as intelligent, warm, energetic, gentle, smart, hardworking and a “walking encyclopedia.”  At the same time, this event was Dizon-De Vega’s personal way of expressing her gratitude to a community she champions. It was also her time to publicly thank her team – consulate officers and staff – who have worked with her. 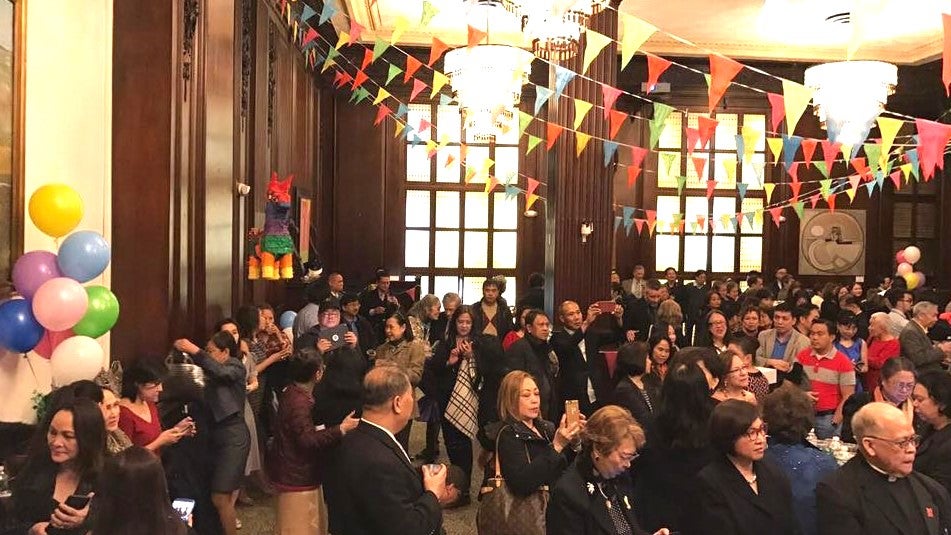 The Kalayaan Hall packed with members of the community during the Appreciation Night. Ricky Rillera/FAPCNY

“While we do a lot of work in New York, I have an excellent team who are terrific in multitasking, very innovative and very selfless team,” she said as she named her top people.

Deputy Consul General Kerwin Tate was having a difficulty containing the noise in the room as he opened the night’s program. The excitement of people that converged in the Hall was drowning each other’s voice. But as Dizon-de Vega approached the stage and spoke, the noise quieted down a bit.

“You all contribute in your own way. Representation takes place in many forms, in many ways, and there is a significant impact when the community comes together,” she said.

Although some already knew she was leaving her post in New York, others were still hoping it wasn’t happening. “I wish she’d stay pa, she’s so much of a people-person,” quipped someone from the sidelines.

Some were expecting she would mention who her successor would be, only to find out there was no official word yet. Dizon-de Vega has served in New York a total of four years including her aborted stint as Deputy Consul General from 2011 to 2013 and her return as Consul General in November 2016 – only to return to Manila by end of March this year.

She was surprised herself at this turn of events in her tenure in New York. “May balat yata ako pagdating sa New York (I may have an unlucky birthmark when it comes to New York),” she said in jest and the audience roared with laughter. 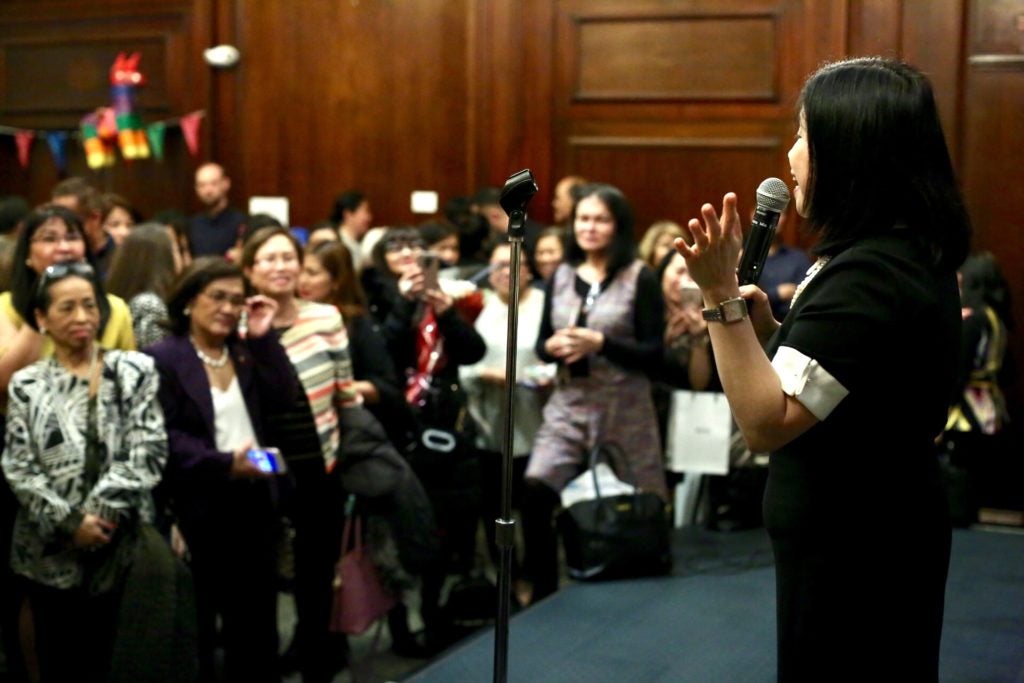 “The secret sauce is you guys. It is not us but it is you and us.”  – ConGen Dizon-De Vega.  Lambert Parong/FAPCNY

“This is my fifth posting and the first time I’ve actually headed a foreign service post. I am privileged and grateful and blessed to have as my first assignment as head of a post in the Philippine Consulate in New York,” she proudly told her audience. She had been previously assigned to Mexico, Hong Kong, United Kingdom and Department of Foreign Affairs (DFA) as Chief Coordinator, Office of the Secretary (of Foreign Affairs), from 2013-2016 in Manila.

Dizon-De Vega began her foreign service in 1995 after placing first in the Foreign Service Officers Examination. She speaks Spanish and French in addition to English, Kapampangan, and Filipino.

Her early recall back to DFA in Manila was anticipated, having been rumored about after her return from the Ambassadors’ Tour in early August last year. At the regular ConGen Hour with the Filipino American Press Club of New York, which she hosts, she gave a nonchalant, mnon-commital shrug when asked if the speculation was true.

“No comment. As far as I know, this is my only designation,” she said then. A natural reaction to expect from a career diplomat in the absence of a written official instruction.  Besides, Secretary of Foreign Affairs Allan Peter Cayetano had just gotten on board then.

But as 2017 came close to an end, the possibility of her departure being reversed was not in sight. Rather, it became clearer she was leaving – it was only a matter of time. At around the same time, the DFA also announced that her husband, Edward De Vega, Philippine Ambassador to Mexico, was going to be assigned to Europe – in Belgium – as Philippine Ambassador there. The post had been vacant since President Duterte took office. As for herself, some are saying she would be an Undersecretary, a top post in DFA.

Which only means that either one of the six current Undersecretaries would be retiring, re-assigned to another post, or a new Undersecretary post would be established for her.

“For all of us in the foreign service, it is really a weigh station. It is fact of life that as we go from post to post, we make new friends, we establish new networks, we engage in different sets of people with different institutions and establishments,” she said.

At Christmas time, she and her family spent time together and celebrated the holidays in the company of her staff in New York.

“A lot of you are my friends on Facebook and often I get invitations, messages, request for assistance, and information that are maybe useful for our work here in the Consulate. I am very, very grateful for all of that,” Dizon-De Vega said.

Besides her FB friends in the Northeast, she also has friends from the global Filipino community. She said they applauded her for what they have observed was a vibrant community in New York and asked her what her secret was.

“The secret sauce in the level of engagement and presence in the Fil-Am community in the Northeast is you guys. You who are gathered here and those who are not with us but who are in different professions who put their best foot forward wherever they may be,” she said as her audience returned the compliment with a thunderous applause.

“It is not really us but it us and you,” she said as if to emphasize that it takes two to a tango.

“My regret this evening, I find that we are on the precipice, on the tipping point of real recognition for Filipinos and Filipino Americans in culture and traditions and our contributions to mainstream society,” she said. She mentioned Fil-Am representation in fields of business, politics, culture, and even network television.

She also mentioned the Philippines as the 10th best-performing economy in the world. “We are moving up and one of the fastest, bright stars of Asia,” she said.

She suggested that the motto for the community, the Philippines and the Filipino people in general including the global community should be “swifter, faster, stronger and higher.” 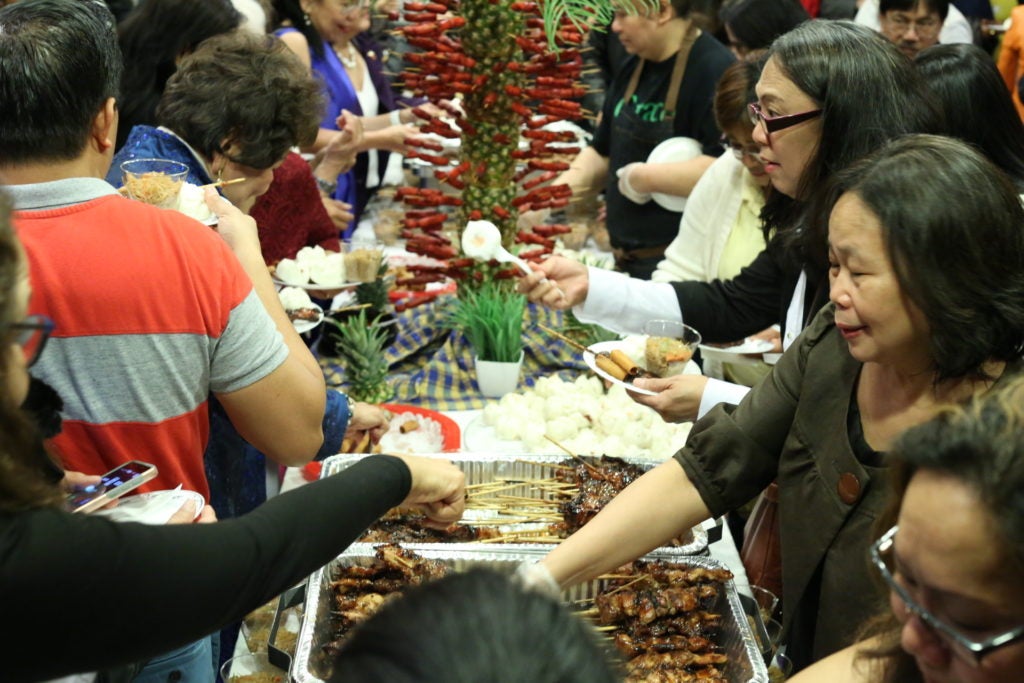 Fiesta time with the community partaking of the food during the Appreciation Night.  | Lambert Parong/FAPCNY

“With this convergence of factors, I think the stars are aligned,” she said.

Before she ended her valedictory, she told the community to help others in need – particularly those who have fallen victim to human trafficking or illegal recruitment.  “Let’s build a more empathetic community and let us support each other,” she said.

Unlike her boss, Secretary Allan Peter Cayetano, who usually begins his speeches with a quote from the Bible, Dizon-de Vega did it in her closing. She paraphrased a passage from the Gospel of Luke, 12:48 as her life quote: “For everyone to whom much is given, from him much will be required; and to whom much has been committed, of him they will ask the more.”

She said, “This has been my life quote for over 20 years of government service and continues to be so. I hope this will give some insights for you, too.”

Consul General Ma. Theresa Dizon-De Vega is scheduled to leave New York to another journey as a diplomat. Her tenure – though short – compared with her predecessors’, will leave “footprints in the sand,” one that will be remembered by everyone whose lives she touched, not only by her presence, compassion, vision, and leadership but also by how she connected with people through her words and action.

Indeed, her life quote says it all.