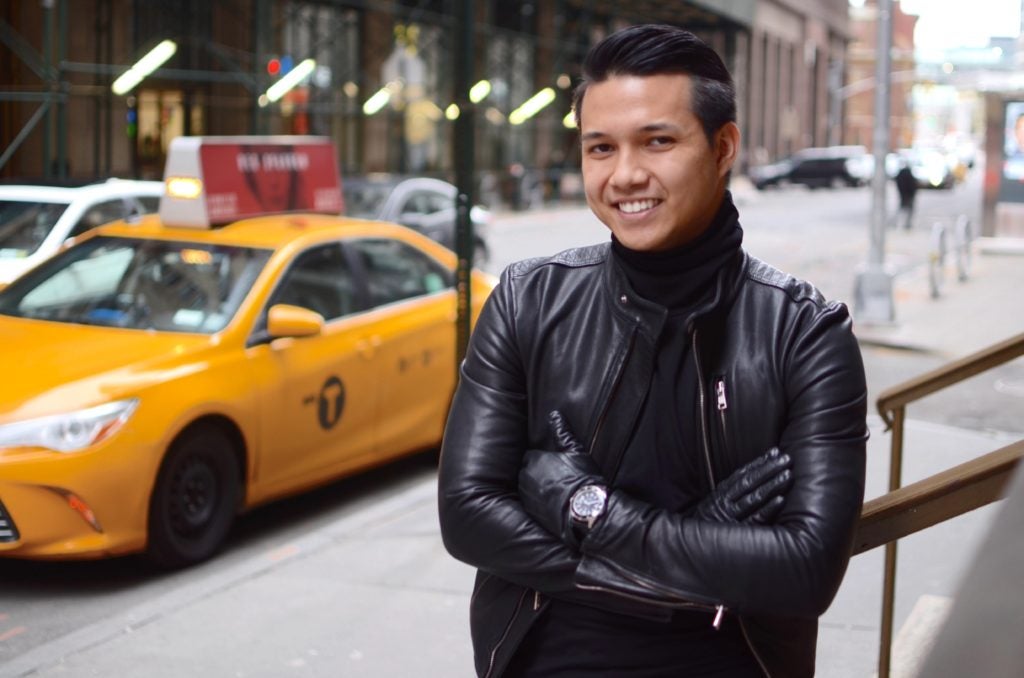 NEW YORK – An exuberant and accomplished young businessman, Brian Poe Llamanzares’ eyes light up while ardently talking about the latest watch by his company, Time Master, and other ventures in Philippines.

His is a small company with a big, bright future ahead, and which aims to be an inspiration to budding Filipino entrepreneurs. “If there’s anything I’ve learned over the past year it’s that businesses begin as a dream, but are made real by audacity, and perseverance.”

Master of own time

Poseidon X, latest piece from Time Master, seamlessly combines classic watch design with functionality. Retaining the same face as the previously released Poseidon, it has a thumbnail-size screen on a leather strap. The inconspicuous screen allows viewing of calls and text messages, tracking of steps taken, calories burned, and distanced walked. It acts as a sensor to enable remote photo taking–open the camera app on your phone and shake your wrist. Poseidon X will launch in Manila come May, to coincide with the company’s first anniversary. 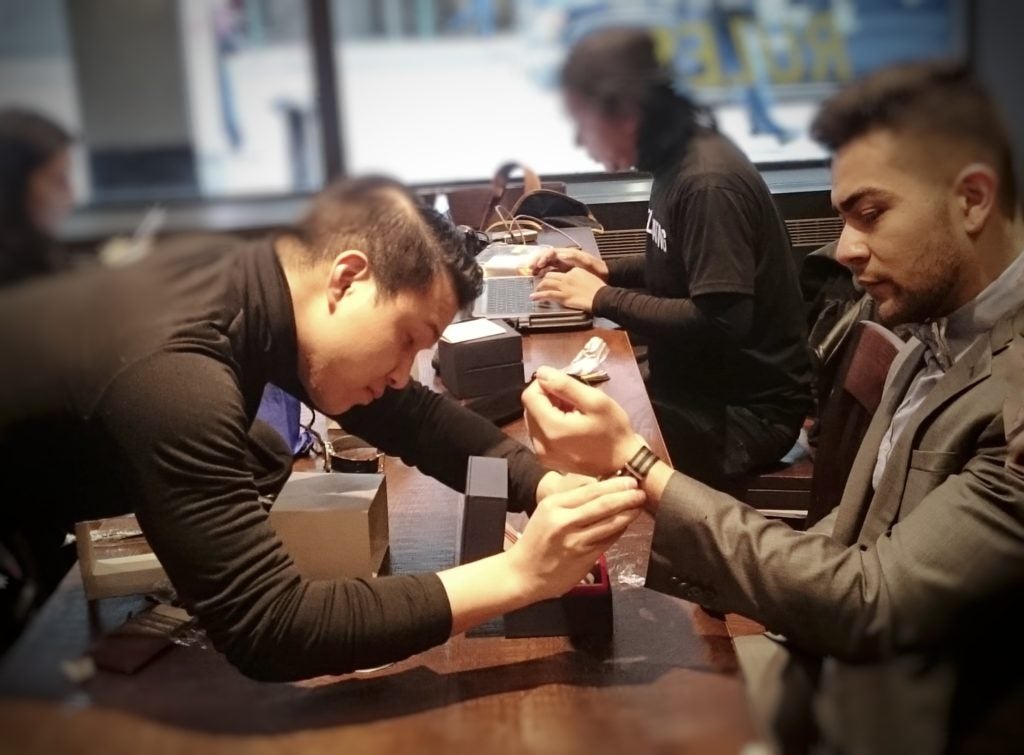 Summing up the new timepiece, Llamanzares says: “It’s for the user who wants to transition to a smart watch without sacrificing quality of Japanese movement or of having a real watch-face rather than a digital one, that will die if you don’t charge it.”

Inspired by different watches gifted by his father, Llamanzares sketches the designs and incorporates elements from Omega Seamasters, Seiko Sumo, and Rolex. A unique element in his watches is the trident-shaped hour-hand, an homage to the mythical god of sea.

“I wanted this to be really special”, he notes, and considers the following as his ultimate test on product development, “Is my dad going to wear this? Is he ‘actually’ going to wear it? Or is he just going to say ‘it’s nice’ but never wear it?” 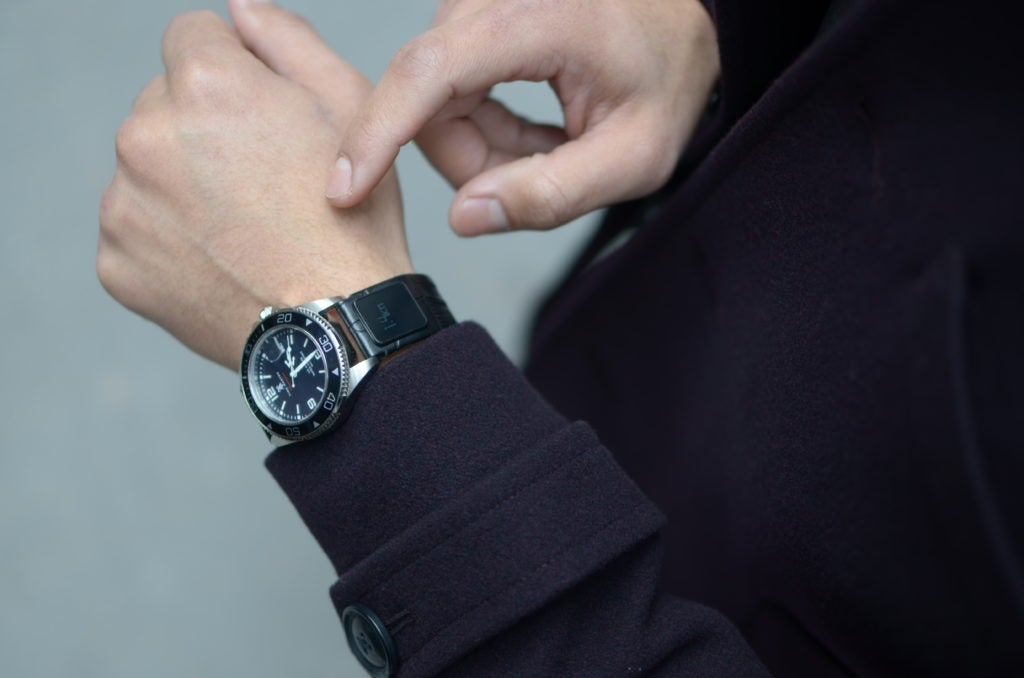 The logo of Time Master has another personal connection to its company owner. If you look closely, “It’s a T inside an M, but actually that’s a symbol for Aries. Because I’m an Aries, I was born in April. So I figured it’s a neat little way to put into the brand.”

Time Master ensures it gives back to its community and donates a portion from every watch sold to MovEd, a small NGO that provides early childhood care and education in underserved communities in the Philippines. “A small contribution from a watch brand for a small start-up NGO like MovEd may make a difference,” Llamanzares explains.

An empire in the making

After launching Time Master, Llamanzares partnered with friends to establish Dulo, a restaurant-bar-event space bar in Poblacion, Makati. This modest space became a niche community for local artists and is currently doing well by providing a platform for talented individuals to showcase their art. Llamanzares is fond of taking his meetings at the popular watering hole, brightly exclaiming “Yes, we serve coffee! So not just drinking all the time!” But a healthy appreciation for great tasting beers resulted in Llamanzares investing in the Philippines’ first craft beer club. Barley & Craft is a subscription service company where members receive a monthly package of carefully curated beers from different local microbreweries. The company connects breweries to beer connoisseurs and facilitates promotion of the local beer industry. Who wouldn’t be excited to open their door to a box of hoppy, malty goodness in a bottle?

Finally, Llamanzares shares “I’ve done Taekwondo, Judo, Jiu Jitsu, Muay Thai, Boxing… I’ve been in every form of fighting since high school, so it made sense to support our local fighters as well. And invest in something related to that.”

Though his involvement and acquisition of shares in an MMA gym is still in infancy stage and no pertinent details were provided, you can tell the young entrepreneur’s holdings are all close to his heart. Passionate in his every single venture, he believes in and uses these products and services.

Understanding the advantageous economic and strategic position Llamanzares finds himself in, he enthusiastically shares some of the lessons learned from experience. It brings him joy to impart advice and tips, and to witness Filipino entrepreneurs succeed in their business. 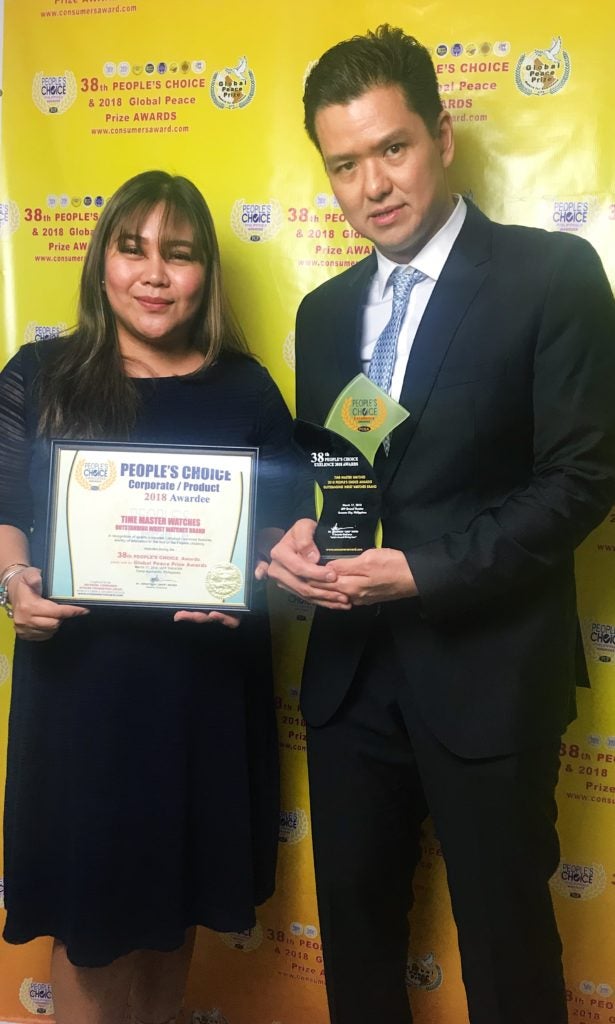 “Figure out what you’re passionate about, and think about whether the market really needs it. It’s hard to break in the market if it’s not something they’re looking for. All companies have small problems and when you get past it, you realize that not giving up is the best option. It’s your dream. Don’t invest in something you don’t believe in. Honestly, it’s quite easy to get discouraged, but in the words of Winston Churchill, ‘success consists of going from failure to failure without loss of enthusiasm.’ Don’t give up.”

“And pick your partners wisely. I wouldn’t able to do any of these without the amazing business partners that I’ve had. Definitely have a good lawyer, and asset manager with you. [It’s] really important to figure out who you are getting into business with.”