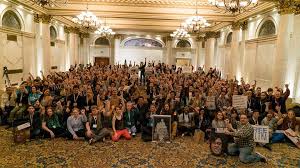 More than 200 delegates to the International Conference of Students for a Sensible Drug Policy, held last month in Baltimore, MD. called on President Duterte to “Stop the killings” and free Senator Leila Delima. They also lobbied in the U.S. Congress for a bill sponsored by Senators Ben Cardin (D-Maryland) and Marco Rubio (R-Florida) to condition US aid to the Philippines based on the government’s adherence to human rights. (PINOY MAGAZINE/Jon Melegrito)

WASHINGTON, DC — Justine Balane, 22, and Shama Bulangis, 23, are two activists from the Philippines who were in the Washington, DC area recently to speak about the impact of President Duterte’s “war on drugs,” especially on Filipino youth.

Of the more than 20,000 people killed since Duterte was elected, the activists noted, many of them are young people, including a 4-year-old child. “They call it collateral damage,” Balane said. “The number of casualties have become so real — seeing and being on the front lines of the things that have been happening has been really tough. That’s why there is no point just standing by or sitting on the fence. You have to act because you eventually hear stories from people about how they are dehumanized.”

Bulangis remembers one incident when a member of their organization was shot and killed. “We had to claim his body and investigate what happened in their house,” she said. “The police broke the gate and forced their way in, held his wife at gunpoint and riddled his body with five bullets.”

Balane and Bulangis are both leaders of Akbayan Youth, which is part of a larger movement, “Millennials Against Dictators.” Their goal is to mobilize young people, speak out against the human rights abuses of the Duterte administration, and call for measures like greater access to health care in local communities. “Kids who are into drugs need to be treated, not killed,” Bulangis said. “We call on the President to stop the killings.” 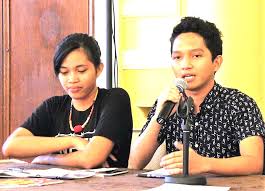 Shama Bulangis and Justine Balane spoke about Duterte’s “War on Drugs” at the Students for a Sensible Drug Policy international conference in Baltimore, and before members of the Filipino American community at a forum in Arlington, VA. PINOY MAGAZINE/Jon Melegrito).

Students for a Sensible Drug Policy (SSDP) invited the activists to speak at its international conference in Baltimore from March 2-5. That same weekend, Filipino American community leaders hosted them at a community Forum at Bistro 1521 in Arlington, Virginia.

“We have been talking with human rights advocates and drug policy experts during our visit,” Balane said. “When there is enough outrage and condemnation, we think that will put pressure on the President.”

The movement Balane and Bulangis are working hard to build aims to challenge the narrative that what Duterte is doing is good for the country. “We want to make people care for each other and trust each other more,” Balane said. “We want justice for the families of the victims.”

While in Washington, both leaders joined dozens of other young activists visit congressional offices to lobby for S. 1055, the Philippines Human Rights Accountability and Counternarcotics Act of 2017, which prohibits exporting any defense services for use by law enforcement in the Philippines.

“Hopefully, our talks will inspire more people to speak up and be more vocal and critical,” Balane said.