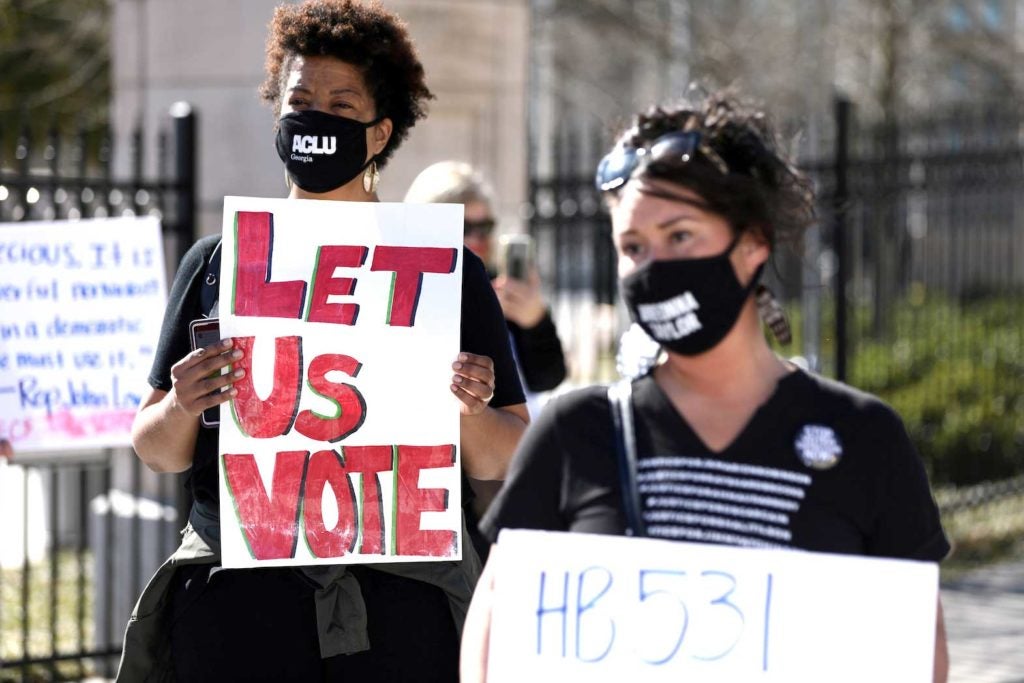 Protesters gather outside of the Georgia State Capitol to protest HB 531, which would place tougher restrictions on voting in Georgia, in Atlanta, Georgia, U.S. March 4, 2021. REUTERS/Dustin Chambers/File Photo

BOSTON/NEW YORK – A push to attract young and diverse talent and global consumers is behind some of corporate America’s willingness to speak out on politically charged issues like Georgia’s new voting law, executives and corporate governance experts said.

Georgia’s decision last month to strengthen identification requirements for absentee ballots and make it a misdemeanor to offer food and water to voters waiting in line, among other changes, drew condemnation from many U.S. companies this week, including Microsoft Corp and Citigroup.

A number of companies say it disenfranchises some voters. Some, such as Delta Air Lines and Coca-Cola Co., are based in Georgia, where state lawmakers have the power to raise state taxes. Delta CEO Ed Bastian said in a public memo that his decision to speak out was informed by discussions with leaders and employees in the Black community.

The companies criticizing the law so far represent a sliver of the U.S. business landscape. Yet they are part of a growing group of companies shedding their reluctance to speak out on politically controversial social issues that matter to many of their employees and customers globally, business leaders interviewed by Reuters said.

“Young people want more than words, they want action,” Debra Lee, the former chair and CEO of BET Networks, a TV network owned by ViacomCBS Inc, said in an interview on Thursday. ViacomCBS has also criticized the Georgia law.

A new focus from investors on environmental, social and governance issues such as climate change and the Black Lives Matter and #MeToo movements has also emboldened companies.

Some companies that are reluctant to criticize specific laws or policies are still willing to come out with more general statements. For example, roughly 330 of the 500 companies in the S&P 500 Index issued comments last year in support of social justice in the wake of the death of George Floyd, a Black man, in the custody of Minneapolis police, according to shareholder advocacy group As You Sow.

This approach, however, does not always appease activists looking for bigger change. Olivia Knight, the group’s racial justice initiative coordinator, said companies often did not follow up with any action, and that many were limited to vague statements of support.

“I don’t think we can make the assumption the corporate world is a pot of social justice advocacy and should be looked to for guidance on these issues,” she said.

On Thursday, Reuters reported that Ford Motor Co’s political action committee is resuming making political donations. It said it will not rule out making donations to Republican lawmakers who voted against President Joe Biden’s election certification on Jan. 6. Former American Express Co CEO Ken Chenault, who co-authored a letter with other Black business leaders this week calling on companies to condemn the Georgia voting law, said in an interview that some firms may be hesitant to speak out for fear of appearing partisan.

But he noted that more than 60 big U.S. companies recently signed a statement opposing state bills focused on sexual orientation, showing a willingness to weigh in at least on some topics. In the battle on voting bills, “we are in the early stages,” Chenault said.

Speaking out against politically sensitive issues can be risky. Shares of some western apparel companies declined after they faced boycotts in China over their statements expressing concern about labor conditions, amid investor worries they would lose access to a vast, growing market. However, companies that spoke out against the Georgia voting law saw little impact on their share price.

“The younger workforce expects you to take a stand on these social justice issues,” Rajgopol said.

A 2019 study by the Pew Research Center found members of the U.S. generations known as Millennials, born between 1981 and 1996, and Gen Z, born after 1996, share more liberal attitudes than older generations on a range of issues, such as favoring more racial diversity and activist government.

“If we are not speaking up against these voter suppression efforts, we’re really taking a chunk out of ourselves and who we are as aviation,” said Sara Nelson, president of the Association of Flight Attendants, speaking at a U.S. aviation summit on Wednesday.

“Management at these companies is much more beholden to this broader stakeholder group,” Marshall said. Conversely, companies that have said less about voting rights could be wary of alienating a more domestic customer base, he said.