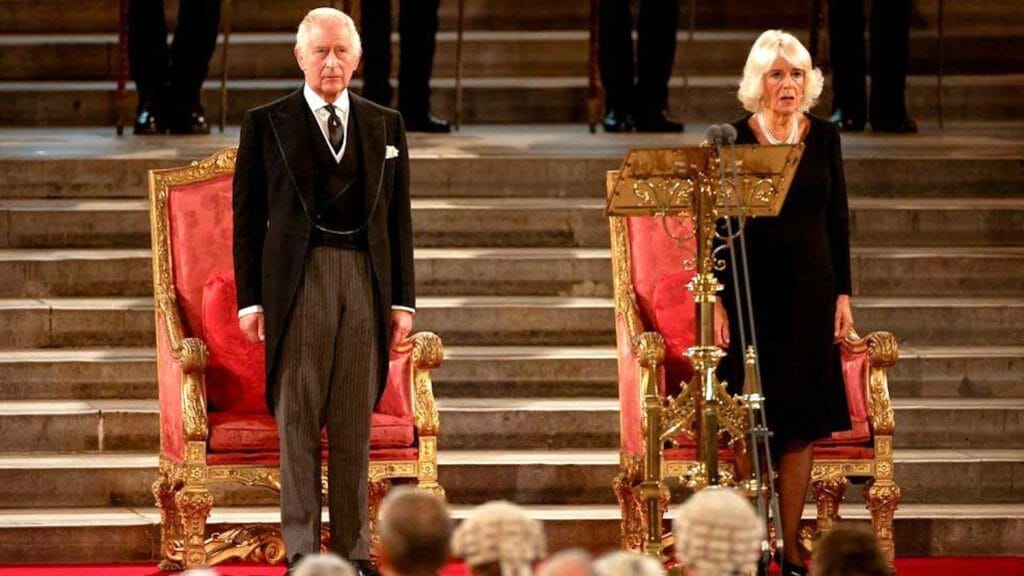 A trumpet fanfare greeted the king and his wife Camilla, the queen consort, as they entered Westminster Hall, which was packed with hundreds of legislators. REUTERS

Queen Elizabeth II died at age 96, and her death officially made Charles III king and Camilla, his lawful wife, the queen consort.

We remember that then-Camilla Parker Bowles was “the other woman” in the marriage break-up of the 20thcentury and became “public enemy number one” after Princess Diana’s death in 1997.

In 1993, a full transcript of a romantic conversation between her and then-Prince Charles from 1989 was leaked and viciously devoured by the media. It became clear before her death that Princess Diana, who was adored by the outside world, secretly dealt with unfaithfulness and melancholy.

The picture that easily calls to mind was the fairy tale romance of Prince Charles and Princess Diana, an almost “perfect” couple solemnly getting married in 1981 in the presence of 2,650 RSVP guests, mostly of royal blood. Their public exchange of vows was then the envy of the world, producing an heir in Prince William a year after, followed by the birth of Prince Harry in 1984.

In 1992, much to the consternation of their idolizing fans, Princess Diana announced a separation, a cooling off period, a generous gift of space to each other “to work things out.” But when Prince Harry was just 12, the royal couple decided to divorce in 1996, with Princess Diana assured of a generous settlement, the right to retain her affluent apartments at Kensington Palace, and her glorious title of “Princess of Wales.”

Sadly, Diana met her tragic death in 1997 in a car accident in Paris when she was 36 years old. The world was flooded knee-deep with tears as Sir Elton John sang in her funeral: “And it seems to me you lived your life like a candle in the wind… Your candle burned out long before your legend ever did.”

In 2005, Prince Charles married Camilla, who was not given Diana’s title of Princess of Wales but instead was granted the title Duchess of Cornwall.

In the colorful history of England, it was King Henry VIII (1491-1547) who made the act of divorce infamous. Married six times, the king’s wives included Catherine of Aragon, Anne Boleyn, Jane Seymour (died after giving birth to Prince Edward), Anne of Cleves, Catherine Howard and Catherine Parr. And every school kid in Great Britain knows the rhyme, “divorced, beheaded, died, divorced, beheaded, survived,” pertaining to the six wives in succession.

In English monarchical history, King Henry VIII divorced his first wife to marry Anne Boleyn, but did not get an annulment from the Pope. Divorce is not annulment. Divorce ends a valid and sanctified marriage, the termination of marital union, thus dissolving the bonds of matrimony and the responsibilities of the couple.

In the Catholic Church, a marriage is valid until proved otherwise (lack of full consent, a partner was previously married, age requirement, and other impediments). Annulment means there was no valid marriage from the beginning, hence it never existed, hence void. But Henry VIII’s matrimony with Catherine of Aragon was valid, and he wasn’t able to prove otherwise.

For Pope Clement’s disapproval of his divorce, England broke away from the Catholic Church. Henry VIII, once bearing the “Defender of the Church,” made himself the “Supreme Head of the Church of England” in 1531 to fulfill his endless caprices and whims.

Fast forward to our time, Queen Elizabeth II’s reign of 70 years is the longest of any British monarch and the longest recorded of any female head of state in history. More than that, her Christian marriage to Prince Philip, the Duke of Edinburgh, lasted 73 years until his death in April 2021.

Seventy-three long years of royal and loyal togetherness is quite hard to follow, and for such reason Queen Elizabeth and Prince Philip have set up before the world one of the best examples of the indissolubility of marriage. I quote an excerpt from TIME’s 1947 coverage of their wedding vows:

“And the girl’s response, ‘to love, cherish, and to obey,’ audible only to those nearest in the Abbey (but clear on the radio), and the tall, tender and slightly bending young man as he said: ‘With this ring I thee wed, and with my body I thee worship.’”

Among contemporary monarchs, Emperor Hirohito of Japan also remained faithful in a monogamous relationship with Princess Nagako, his wife of 65 years, until his death in 1989. They were married in the Theravāda Buddhist tradition in 1924.

I should mention here that the Catholic and the Anglican matrimonial promises are the same: monogamous, heterosexual and a lifelong commitment.

Using the 16th-century Anglican Book of Common Prayer, the same official book used by Prince Charles and Princess Diana in 1981, Prince Harry and Meghan Markle made a solemn and public promise: “To have and to hold, from this day forward, for better for worse, for richer and poorer, in sickness and health, till death do us part.”

On that beautiful day in May 2018, the lifetime commitment of the royal couple was solemnized in St. George’s Chapel at Windsor Castle, a splendid sanctuary of the British monarch for a thousand years.

Sometimes, I ask myself, what if, hypothetically, Prince William divorces Princess Catherine, his lawful wife, or if Prince Harry divorces Meghan Markle for whatever reason? How would the British people feel? And the world?

Matrimony is neither a signed paper nor a saccharine-schmaltzy ritual. It’s a divine institution, first and foremost, because the Good Book says so. And for more than 2,000 years, Christianity has mightily defended the sanctity of this divine institution:

“A man shall leave his father and mother and be joined to his wife, and the two shall become one flesh. Therefore, what God has joined together, let no one separate” (Mt. 19:5-6).