The Backrooms: An Internet Urban Legend

A creepy story has kept internet users up at night lately. Mention “The Backrooms,” and unsettling images will come to mind.

In response, many of them created online content inspired by the Backrooms story. Consequently, learning more about The Backrooms can show how ideas spread online.

We will start by discussing the features of The Backrooms. Next, we will discuss how The Backrooms became well-known among online communities.

What are The Backrooms? 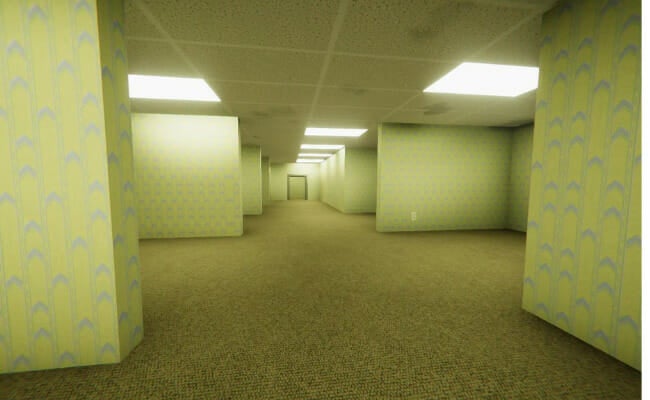 Imagine the following scenario. You were going through your daily routine when you suddenly found yourself in a maze of randomly segmented empty rooms.

You look around, dazed and confused. Then, you notice the buzzing fluorescent lights buzzing with endless background noise. All around, you see sickly yellow walls.

You walk around and feel the moist carpet floors. Look ahead, and you notice more yellow rooms and fluorescent lights ahead. After walking for hours, you realize that there is no escape.

You breathe heavily in despair. Then, you hear a sudden noise behind you. Turn around, and there is nobody there. Look back, and you find a strange humanoid figure in the distance.

You flee to hide from the monster but find no safety, only more walls. In response, you accept the reality that there is no escape from the mysterious figure and its creepy domain.

That scenario is the typical description of The Backrooms. People online often describe it as a “noclip out of reality.” Let us digress for a moment to discuss the term “noclip.”

Old video games did not have online connectivity and microtransactions. Instead, they had cheat codes that allowed players to access features unavailable during regular gameplay.

The “noclip” cheat was the most common code for PC games. It allowed the playable character to move through solid in-game objects. As a result, they could skip multiple levels of the game.

Some people could even travel beyond the game levels and into strange spaces. As a result, people describe The Backrooms as a “noclip zone” beyond reality.

How did The Backrooms become popular? 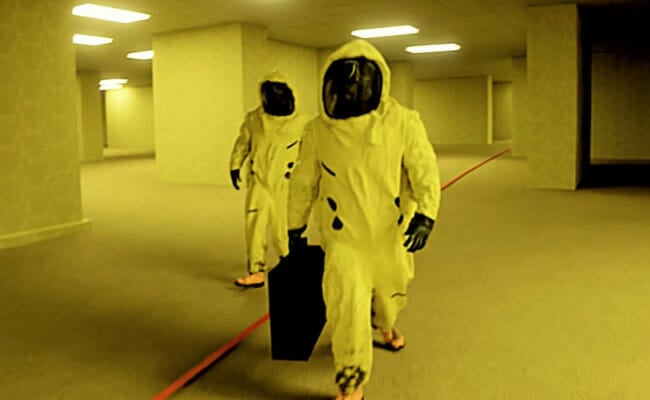 Would you believe the trend started from a few pictures? In May 2019, an anonymous user from the online forum 4chan asked the members of the /x/ paranormal board to post “disquieting images that just feel off.”

One of the replies featured a picture of a dingy office with fluorescent lighting and yellow walls. Later, an anonymous comment dubbed it “The Backrooms.”

It went on to describe an area that spans 600 million square miles. Also, a poorly wallpapered maze with damp carpet floors covers the space. There is nothing else but the hum of cheap light bulbs and the vague feeling that entities lurk in the corners.

The first story regarding The Backrooms

Chris Frewerd found the photo in 2019 when he was 16 years old, and it has lingered in his mind ever since. He noticed that The Backrooms photo kept appearing on 4chan.

In response, he woke up at 5:00 AM and wrote the first spooky lore about the concept. He said, “Something about that original 4chan post really resonated with me, as I’m sure it did with the millions of other people who love the Backrooms concept.”

He posted the story on Reddit on the r/CreepyPasta thread and received two upvotes. Eventually, more people started sharing their iterations of the lore. Some offered photoshopped images, inspired videos, and related video games.

The different levels of The Backrooms

The original lore or canon says that The Backrooms has three different levels of The Backrooms. You may find more in other spin-offs, so the following list explains the original sections:

Level 0 or “The Lobby” shows in the original Backrooms picture. Users imagined manic humanoid entities called hounds prowling the area. Also, it contains the “noclip zone” that may return a person to Earth. Unfortunately, it may lead them back to the starting point of Level 0 or another unknown location.

Level 1 or the Habitable Zone becomes available after someone wanders around Level 0 for days. It looks like a dingy warehouse with fog and puddles of water. Unlike Level 0, the Habitable Zone’s lights flicker more often and may turn off completely. Worse, hounds may attack wanderers.

Level 2 or “Pipe Dreams” appears as long service tunnels with pipes on the walls. Its lights shine bright enough to raise temperatures to 100 degrees. According to the lore, survivors have escaped the Backrooms by remaining calm and accepting the area as their home.

The original Backrooms subreddit had over 231,000 members at the time of writing. Now, they share more content related to the concept, such as memes and mockups of the different rooms.

It had over 17.4 members at the time of writing. They focus on the look and feel of the original 4chan photo. They still share ideas about The Backrooms but do not delve deeply into the spin-offs.

Litbeep believed that the Backrooms did not need new locations or entities. He said the eeriness of the place was more than enough. 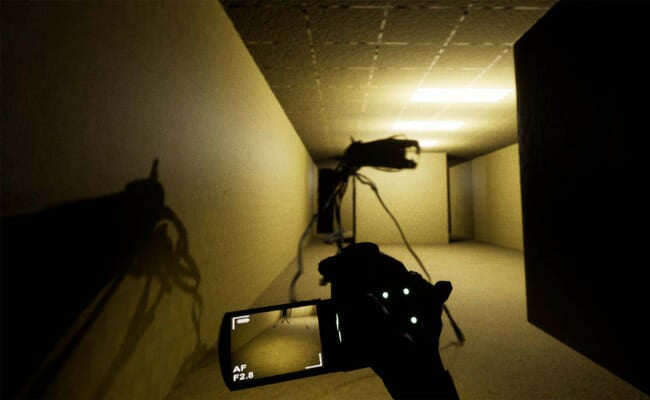 The made-up realm inspired many videos and games, so let us take at some of the most popular ones. Let us start with YouTuber Kane Pixels, a 16-year-old middle schooler.

He shared a found-footage-style video set in this alternate reality while managing schoolwork. It took him a month to create it using video editing software Blender and Adobe After Effects.

It allowed Kane Pixels to recreate The Backrooms with hyper-realistic video effects. He even admitted that his creation spooked him at times.

Fortunately, his hard work paid off because the video received over 38 million views at the time of writing. Moreover, some video games explore the Backrooms:

The Backrooms Game is a free video game available on PC. Your goal is to escape while avoiding monsters. What makes it unique is its “sanity” mechanic. Your character must look at his wristwatch to keep calm. Otherwise, he may panic and attract monsters.

Enter The Backrooms is available on Steam for $4.99 and has a retro pixelated look. You will have to figure out how to defeat different entities. Some require you to find the exit, while others will go away after a specific period.

The Backrooms Simulator is available on iPhone and other Apple devices for $0.99. Unlike the previous examples, it specifies that it is not a game. Instead, it only lets you walk around the in-game Backrooms. 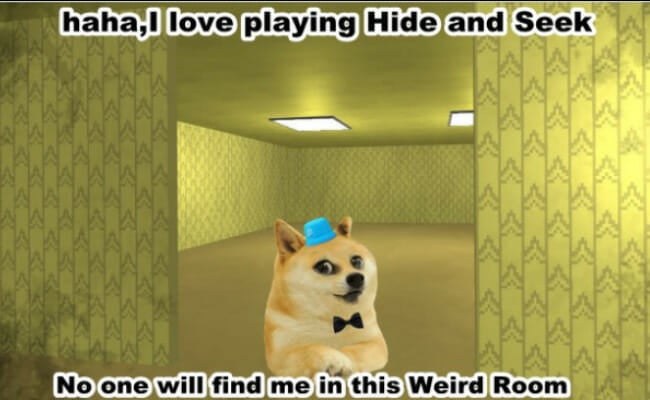 The original concept came from a few images, but they captivated the imagination of various people. In turn, they created clips, games, and other related content.

There are no real-life Backrooms, but some people feel it seems familiar. Listen to these creators; they said they feel nostalgia when viewing the images.

Kane Pixels said the Backrooms depicts his poorly remembered past from the late 90s and the early 2000s. Those were the times before the internet became mainstream.

It was the time when people used VHS recorders and wired telephone sets. Homes and offices had a design similar to the Backrooms. Yet, The Backrooms elicit fear among viewers.

The walls have a sickly yellow hue, and some people cringe at the idea of damp carpet floors. Also, The Backrooms have flickering fluorescent lights you may find in an indoor parking lot.

Some call them liminal spaces, areas stuck between two places. In other words, The Backrooms are supernatural, and people have been fascinated by such ideas for thousands of years.

The nostalgic and fantastical aspects draw people together, allowing them to build on the lore. Aside from The Backrooms, there are other community-driven spooky stories.

For example, Slenderman captured people’s imaginations before The Backrooms became popular. It was an unusually tall humanoid figure with slim arms, a formal suit, and a featureless face.

It appears on games where you are stuck with it in a forest. Their goal is to collect pages while avoiding Slenderman. It became so popular that it had a full-length film.

Also, you have the SCP Foundation. The acronym stands for “Secure, Contain, Protect.” As the name suggests, the Foundation catches and imprisons various fictional features and artifacts.

People expand the lore by submitting SCP entries, ranging from original concepts to existing mythological creatures. You can find numerous clips and video games inspired by it.

The Backrooms are trending on the internet. Many people watch videos and play games regarding the concept. Remarkably, it all started from a few pictures!

It shows that there are feelings and ideas that people share worldwide. The Backrooms elicit nostalgia and fantasy that attracts people from all over the world.

These ideas are like the fables and myths we read during history class. However, we can now share them with people outside our countries. That is the power of the internet!

What is the source of the original Backrooms image?

The Backrooms came from several pictures in May 2019. An anonymous user posted them on the online forum 4chan with the members of the /x/ paranormal board.

Is The Backrooms a movie?

The original Backrooms started from a few pictures from an online message board. However, you can watch YouTube clips about it, like the popular one from Kane Pixels.

Is there a video game about The Backrooms?

You can play several video games inspired by the famous liminal space. For example, you could download and play  The Backrooms Simulator on Apple devices for $0.99.