San Marzano Tomatoes: Everything You Need To Know

Everything You Need to Know About San Marzano Tomatoes

Many believe that San Marzano tomatoes are the best-canned tomatoes in the world. They even refer to San Marzanos as the crème de la crème – the standard we use to judge other tomatoes. Back then, it was not easy to lay your hands on them; these days, you can find some varieties on most supermarket shelves.

Both chefs, home cooks, and culinary enthusiasts around the world know these Italian tomatoes for their sweet taste and subtle acidity that matches perfectly with cheese and rich meats. But is the San Marzano tomato worth the hype?

What are San Marzano Tomatoes? 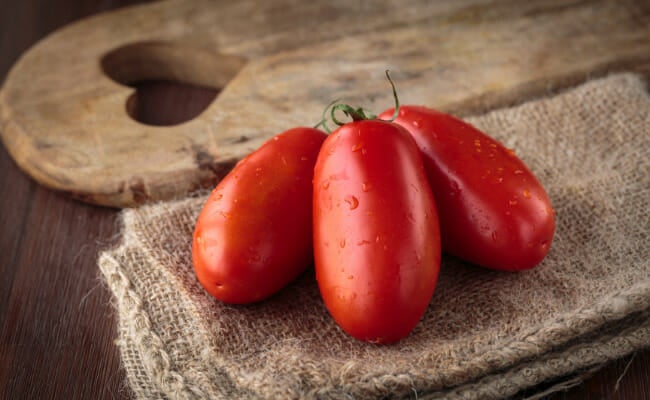 The name “San Marzano” refers to a particular kind of tomato in a specific area in Italy. San Marzano tomato is a plum tomato that is thinner and longer, with fewer seeds than the regular plum tomatoes you might find in grocery stores.

Initially, these tomato plants were grown near Mount Vesuvius, in Italy’s Agro Sarnese Nocerino of the Sarno River valley. It is often said that tomatoes grown in rich volcanic soil are sweeter and less acidic. The taste of these tomato plants is so unique that they are under “protected designation of origin” or “DOP” status. The problem is, however, that anyone who produces tomatoes can claim the name as theirs and sell it at outrageous prices.

You should know that not all canned Italian tomatoes are authentic. Farmers also grow ‘San Marzano’ tomatoes outside of Italy. Their seeds are now readily available, and you can grow them in your vegetable garden. 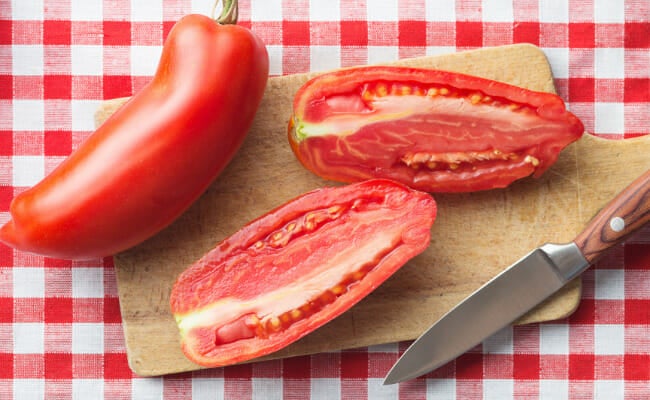 According to popular demand, Americans prefer American-grown canned tomatoes to authentic San Marzano tomatoes. This is due to the abundance of salty and acidic flavors stashed in the American-grown tomatoes is a valued flavor. And honestly, Californian San Marzanos are pretty good too.

In many cases, chefs and home cooks alike don’t give authentic San Marzano tomatoes enough credit. Still, the rich flavor of true San Marzanos makes them different from other tomatoes and possibly even worth the high price. They’re especially great for pasta sauces and other tomato meals.

American processors add calcium chloride to keep their tomatoes in shape. This key ingredient was present in several brands of canned American tomatoes. Calcium chloride makes it difficult for tomatoes to dissolve into sauce; luckily, San Marzano tomatoes are all-natural.

How do San Marzanos differ from other canned tomatoes?

Besides their sweet and less acidic taste, San Marzanos have firm pulp, easy-to-remove skin, and far fewer seeds than other tomatoes. This is why top chefs in America first began seeking out cans of San Marzanos from official DOP-certified sellers.

These tomatoes are famous for having a balanced flavor that consists of a sweet taste, tomato concentration, and just the right acidity level. At the same time, most other brands of canned tomatoes use profuse amounts of salt.

We’ve often heard that the fertile soil in which any plant grows tremendously affects the taste of its products. And for the young plants, there is just no argument regarding those plum tomatoes of San Marzano grown in the volcanic soil.

Unlike San Marzanos, the Roma tomato is a medium-sized plum tomato that is bigger than grape cherry tomatoes but smaller than regular tomatoes. The shape also rounds into a point at the bottom of the fruit. Romas have firmer flesh and less water content, making them ideal for sauces, just like most San Marzanos.

Similarly, they have a balanced sweet taste and low acid levels. If paying a hefty price for imported tomatoes is what you want, then you need to do it right. Organic sweet tomatoes grown and plucked from Italian volcanic soil is the way to go.

How can I tell if my products are authentic? 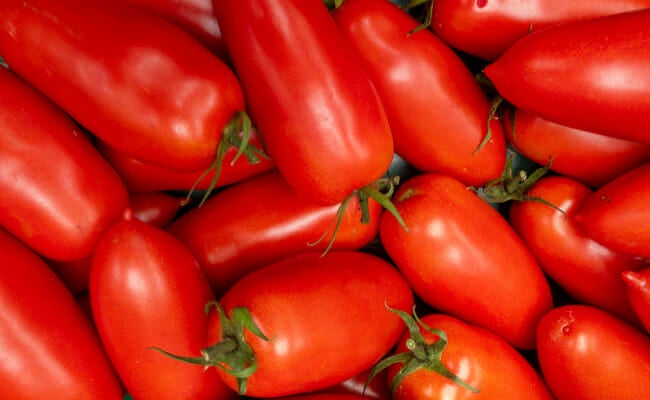 Like olive oil and honey, there are many fake versions of these tomatoes. People have found them grown outside of the original region in the U.S. These plants are likely the same breed, grown in similar soil conditions and packaged in similar cans; but they are not DOP-certified. Many American brands now sell domestically grown versions of the breed as cheaper alternatives. You may not know the difference by their taste.

And then, there’s the outright fakery. You can identify true San Marzano tomatoes through the DOP designation on the can. However, many people say that sellers will falsely put the designation on cans after they arrive in the U.S.

One way to satisfy your curiosity would be to find an authentic can of these fruits and use it in your favorite recipe. Then try repeating the same recipe with other canned tomatoes imported from Italy to be able to tell the difference.

The real San Marzano tomatoes grow in the Italian region of Agro Sarnese Nocerino in the Sarno River valley close to Mount Vesuvius. There, the rich volcanic soil has the right soil pH needed to produce these sweeter and less acidic tomatoes.

These tomatoes retain a rich flavor and balanced taste, making them preferred among other tomato products. Though people already grow them outside of the original region, you can identify the true San Marzano in the following ways: