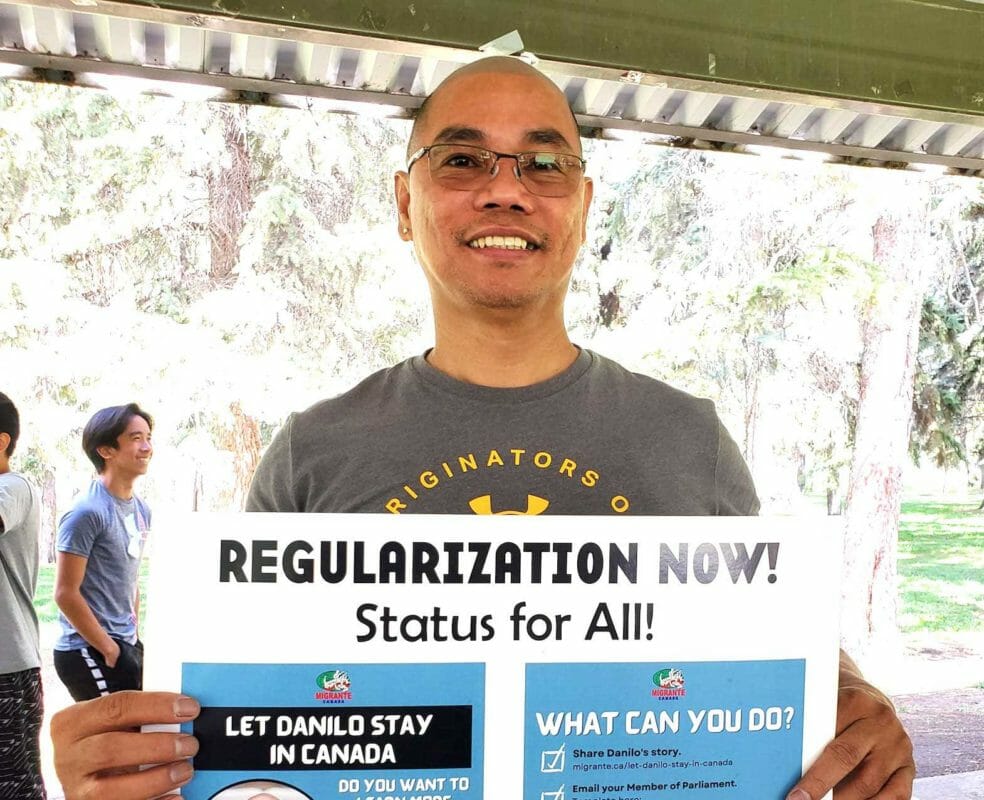 In 2017, Danilo de Leon lost his status when his application for the restoration and extension of his open work permit was refused when his temporary resident visa lapsed. CONTRIBUTED

Danilo de Leon, a former temporary foreign worker who lost his status in 2017, was served with notice of deportation on July 20. He is expected to leave Canada on Aug. 29 via a border services-arranged flight to the Philippines.

De Leon heads Migrante Canada, which has launched a campaign for his stay, highlighting the need for regularization of undocumented immigrants, which continues to  confront Canada’s immigration department.

Immigration, Refugees and Citizenship Canada (IRCC) said on its website

that it is in the exploratory phase of examining options for regularizing undocumented workers in Canada.

IRCC admits there are no accurate figures on the number or composition of Canada’s undocumented migrant population. Data generated by academic research suggest there is anywhere between 20,000 to 500,000 members of this sector.

Many migrants become undocumented by “falling out of status when they cannot meet eligibility criteria for existing immigration programs after lawfully entering Canada and have overstayed.”

“Undocumented migrants are a vulnerable group due to their lack of immigration status, as was seen during the COVID-19 pandemic. They have limited access to health care, social services or employment protections,” it said.

For almost two years since his arrival in February 2009, Danilo worked as a janitor for Bee Clean, a contractor for the University of Alberta.

In 2010, Danilo led a group of temporary foreign workers, mostly from the Philippines, who complained of unfair labor practice stemming from unpaid overtime hours and won against their employer, Bee Clean.

Since then he has become involved in migrant rights advocacy, helping migrant workers know their rights and supporting causes to uplift their welfare.

In 2017, he lost his status when his application for the restoration and extension of his open work permit was refused when his temporary resident visa lapsed. He found support from his community and Migrante in Alberta.

The father of two received a new open work permit in October 2020 and immediately worked two jobs to support his family.

Meanwhile, an exclusion order served for him in 2018 remained active until it recently became enforceable through the deportation order in July.

“I felt scared, my knees were shaking. I went home right away and prayed for myself and my children,” de Leon said, recalling the moment he received the order sent via email.

“The slow processing times and the constant changes in the immigration left so many working immigrants behind and most end up with no status or become undocumented,” he said.

He believes the federal government needs to create a long-term solution, instead of intermittent changes to the immigration system, and provide permanent status to all immigrants.

Finding approaches to regularizing status for undocumented workers who are active members of their communities is one of the mandates of IRCC Minister Sean Fraser since he took office in December, 2021.

“This work is currently ongoing and it would be premature to discuss future policy decisions. However, Minister Fraser is committed to achieving his mandate items and will ensure the proper outreach and consultation is completed to ensure the most inclusive policy is implemented,” said Aidan Strickland, spokesperson for IRCC, in email interview with INQUIRER.net

A motion passed by the House of Commons in May this year has set a 120-day deadline for IRCC to come up with a plan to provide permanent status to workers from all skills levels. The plan will be taken up in Parliament by Sept. 8.

One targeted initiative that is currently in place that provides a path to permanent resident for out-of-status workers is the Temporary Public Policy for Out-of-Status Construction Workers in the Greater Toronto Area.

The measure, which took effect in Jan. 2020, has a cap of 500 principal applicants including their family members and has been extended for another year until Jan. 2023.

“It recognizes the economic contributions of these workers and aims to address their vulnerability due to their lack of immigration status,” added Strickland.

At the height of the COVID-19 pandemic, IRCC implemented what it called “TR to PR” program or the “Temporary Resident to Permanent Resident Pathway,” which allowed some 90,000 newcomers working in key frontline sectors such as health care, transportation, service and manufacturing gain permanent status in an expedited fashion.

Such initiatives, although beneficial to some sectors of temporary residents, create confusion and competition among immigrants wanting to receive permanent status but with only limited slots available, said de Leon.

A foreign national whose status has expired has within 90 days to restore their status. After this period, they are ordered to leave Canada and reenter through one of the immigration pathways they are eligible for.

A petition led by Migrant Rights Network, a coalition of grassroots migrant organizations across Canada calling for permanent status for all migrants has gathered 6,000 signatures.  The coalition believes there are some 1.7 million immigrants in Canada who are without permanent status.

For its part, Migrante Canada in a statement on Aug. 2 said its embattled chairperson could face political persecution if sent back to the Philippines because of his beliefs and advocacy.

It attributes the potential threat to the Anti-Terrorism Act signed into law in June 2020, which it said has been utilized by state forces to attack its critics, including activists.

“Danilo is precisely what Canada needs. He has worked and lived in Canada for over ten years, pays his income taxes, gives back to his community through his volunteer work which included helping with the Edmonton Food Bank and the Edmonton General Hospital and considers Canada his home,” it said.

“As a father of two daughters, Danilo made the sacrifice of leaving them in the Philippines to work in Canada so he could provide for them. He has worked tirelessly and has persevered with the hope that his daughters could join him and they can be reunited as one family,” it added.