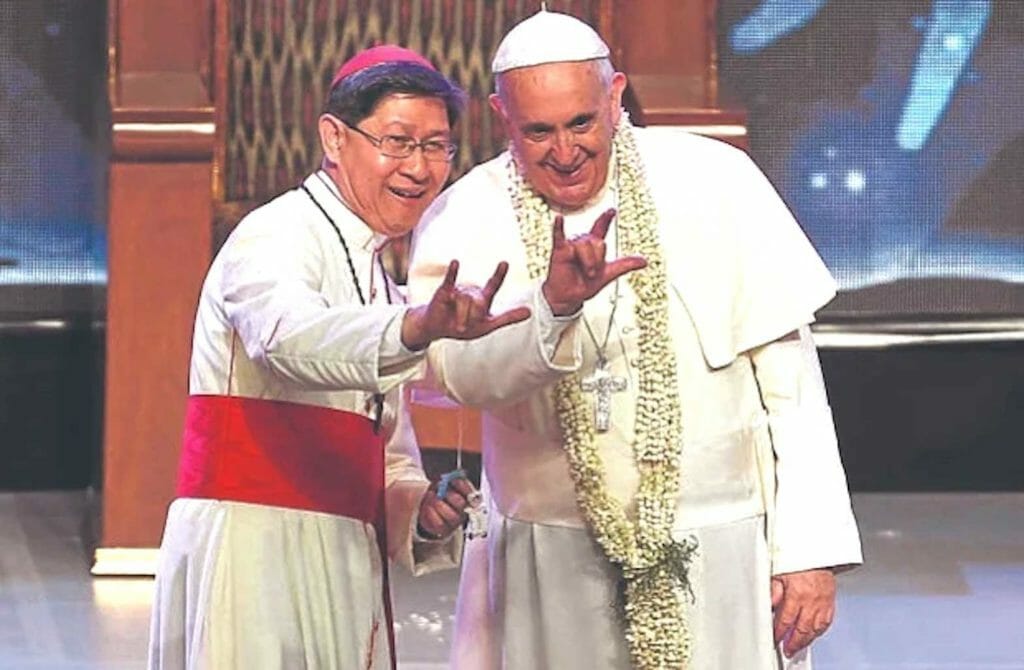 Cardinal Luis Antonio Tagle with Pope Francis during the pontiff’s visit to the Philippines in 2015. Tagle was then still the archbishop of Manila. (File photo by EDWIN BACASMAS / Philippine Daily Inquirer)

His admirers rejoiced at news of Luis Antonio Cardinal Tagle being a strong contender for the papacy – a “papabile.” But does our very own Filipino prelate think about it? IMHO, as my old left brain tells me, he doesn’t even think about it. In fact, he disdains it.

When I heard someone say that Cardinal Tagle’s enlarged influence and promotion made him the second or third most powerful prelate in Rome, I laughed.

Quite the opposite, he was tearful. He didn’t want any of those. In fact, he didn’t want to go at all. Only the virtue of obedience made him accept the burden. For friends who know him up close and personal, Cardinal Tagle did not accept Rome’s assignment to become stronger and mightier.

He did not accept being Cardinal-Bishop to be better than the old-timers in the Vatican. In Rome, only the Pope is primus inter pares, “the first among equals” and all the rest are disposable consultants and advisers.

From Day One of his pontificate, the Holy Father Pope Francis has spent all his remaining physical energy nudging the Catholic hierarchy to embrace “living-on-essentiality” lifestyle, responsible governance, and financial prudence.

Inside the Vatican, which is the world’s oldest bureaucracy, Pope Francis put more transparency in the running of the Catholic Church, as it has seen its fair share of corruption scandals in recent years.

In 2018, the Jesuit Pontiff directed all Vatican officials, members of the Roman Curia, and bishops to lead simple lives and renounce any desire for power after they retired from senior positions.

The Holy Father gave the world a lesson: Ditch the old habit of thinking that “feeds the vainglory of those who are content to have a modicum of power and would rather be the general of a defeated army than a mere private in a unit which continues to fight” (Evangelii Gaudium, 96).

The necessary overhaul involved the graceless exit of certain Vatican officials and bishops from senior positions, including former Vatican Secretary of State Tarcisio Cardinal Bertone and Angelo Cardinal Becciu. The newly appointed ones understood what the Holy Father intended when he made them cardinals, id est, “to serve and not to be served.”

He imposed a $45-gift cap for Holy See personnel and slashed 10% of the salaries for cardinals across the board in a bid to address the Vatican’s $33-million budget deficit in 2021.

Given the scale of the problem, the curial reform agenda included maximizing the efficiency of all available human resources, hence, the multi-tasking regime on the part of the resident cardinals in Rome. The Vicar of Christ has tapped younger cardinals and bishops to help him actualize genuine reform and purification in the Church, Cardinal Tagle being one of them.

To the Filipino prelate, Pope Francis has entrusted important Vatican posts, principally as Pro-Prefect of the newly organized Dicastery for Evangelization, once known as Propaganda Fide, in addition to membership in other dicasteries and some other ad hoc appointments.

The Holy Father did raise Cardinal Tagle from a cardinal-priest to a cardinal-bishop in 2020, a logical move so that the latter could become more effective in the performance of his Vatican posts.

While Vatican watchers say that the rare promotion enhances his secured chances as a papabile, the same thing was far from the mind of the Filipino prelate. Both brilliant and humble, Cardinal Tagle is cognizant of the Roman proverb: “He who enters the Conclave a Pope leaves it a Cardinal,” intra papa in conclave, usisce fuora cardinal.

In addition to his voluminous desk-and-paper work and decision-making functions, Cardinal Tagle just kept on rolling his sleeves since his arrival in Rome in 2020, quite similar to what Konrad Cardinal Krajewski was doing.

Both cardinals have burdened themselves with all sorts of alay-kapwa, relief-giving, and life-saving operations – the Polish Cardinal being the Pope’s Almoner and the Filipino Cardinal being the President of Caritas Internationalis – working hard as partners in Pope Francis’ “repair-my-Church” reform projects.

When the London-based Catholic Herald named Cardinal Tagle and a Hungarian cardinal as possible next pope, I told myself: Pray, pray, and pray for Pope Francis and the future of the Catholic Church.