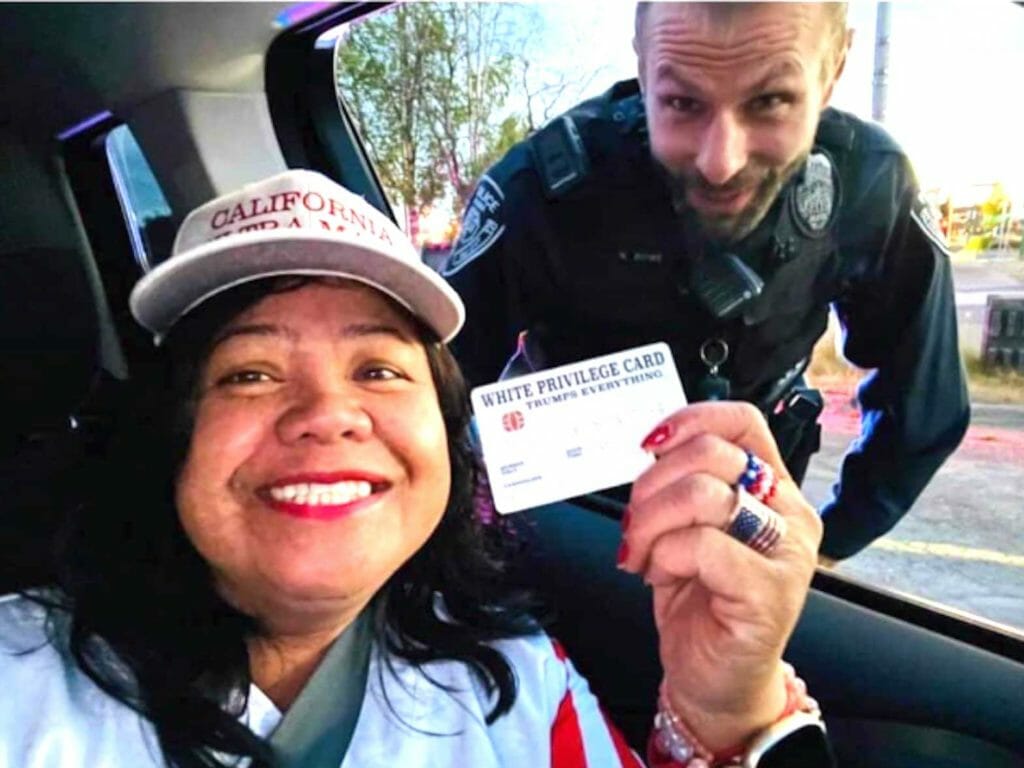 Mimi Israelah, a Trump supporter posted, “When I saw my White Privilege card, I gave to him if it’s ok,” she wrote. “He laughed and called his partner. It’s their first time to see a White Privileged (sic) card.” FACEBOOK

ANCHORAGE, Alaska — Two Anchorage police officers violated department policy during a traffic stop last month when a woman Trump supporter showed them a “white privilege card” instead of a driver’s license and was not ticketed.

But the police department is treating it as a confidential personnel matter, and it’s not clear what policy was violated or what disciplinary actions the two officers faced, if any, according to the Anchorage Daily News.

Mimi Israelah, who describes herself as a Filipina, said in a Facebook post that she was pulled over for weaving at 3:43 a.m. on July 9 in Anchorage after arriving on an early-morning flight from California for a Trump rally.

“When I saw my White Privilege card, I gave to him if it’s ok,” she wrote. “He laughed and called his partner. It’s their first time to see a White Privileged (sic) card,” she said.

The top of the novelty card reads: “White Privilege Card Trumps Everything.”

A video apparently taken by Israelah of the encounter was reposted on Twitter. Two officers are seen standing outside her car window. She asks one, “You like my White Privilege card?” One officer says, “That’s hilarious.”

Deputy Chief Sean Case said some people who saw the post had negative reactions to it, and believed it was inappropriate. “We recognize that,” he said.

Anchorage police officers identified in the incident were Nicholas Bowe and Charles Worland. The two were placed on administrative leave during the 11-day investigation, Case said.

Police would not provide additional information about the internal investigation, including which policies were violated and what, if any, repercussions the officers faced.

Israelah was not cited during the stop, although the municipal code requires that all drivers carry their license at all times when operating a vehicle.

Police spokesperson Sunny Guerin said police can do a computer check to determine if a person has a valid driver’s license.

Police Sgt. Jeremy Conkling, president of the police union, said officers have discretion and generally don’t write citations for minor offenses, like not having a physical license present.

“Especially in this circumstance, where you had a very, very low-level minor offense and the officers are really just focused on trying to find DUIs — I’m not at all surprised they didn’t write a citation. I don’t know that a lot of officers would have written that citation, if any,” Conkling said.

However, Celeste Hodge Growden, president of the Alaska Black Caucus, said she wonders if the lack of citation was tied to the novelty card. “Is it because the white privilege card was effective?” she asked.

“The investigation regarding the incident is completed and is a part of confidential personnel files that will not be released publicly,” Guerin said.

Another police spokesperson said both officers remain in the department.

Hodge Growden said she wants the police department to accept accountability for what happened and be transparent about any disciplinary actions the officers faced. This could have been a teachable moment, she said.