US housing index cooldown is recession red flag for markets

US housing index cooldown is recession red flag for markets

With the Federal Reserve set to jack up interest rates again this week, Wall Street is on alert for signs of recession, and recent housing data suggests the sector may be a harbinger of a cooling economy.

Homebuilder stocks, sales, and mortgage data show that the previously booming housing market is falling back to earth amid a broader economic cooldown.

Surging mortgage rates, exacerbated by Fed hikes this year, have begun to reverse a demand/supply imbalance, the result of a suburban stampede prompted by COVID-19 lockdowns. The ensuing drop in inventories, along with a scarcity of lots, materials, and construction labor, has launched home prices into orbit.

Combine that with the highest home loan rates in a generation, and affordability has evaporated along with demand.

On Tuesday, two additional housing indicators are expected. The first is S&P Case-Shiller’s 20-city composite, which is expected to show year-on-year home prices cooled in May to a still-blistering 20.8%.

Also on Tuesday’s docket, the Commerce Department’s new home sales number is expected to have fallen by 4.6% last month. 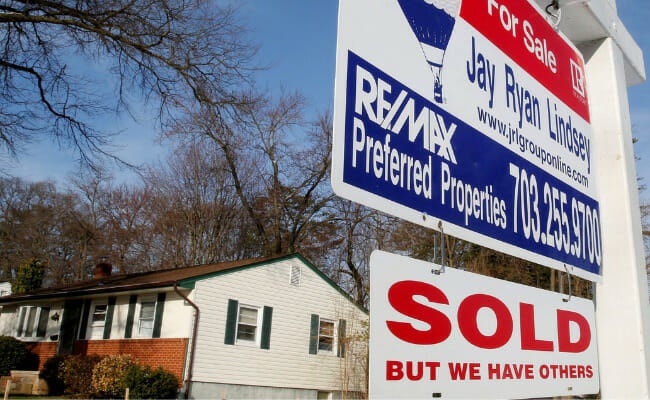 A “SOLD” sign hangs in front of a house in Vienna in Virginia March 27, 2014. REUTERS/Larry Downing

Annual home price growth has been in the double-digits since December 2020, just before demand for loans to buy homes started falling.

Last week, the National Association of Home Builders (NAHB) housing market index builder sentiment plunged to its lowest since May 2020.

The seasonally adjusted annualized rate (SAAR) of new home sales compared with NAHB’s gauge of prospective homebuyer traffic, shows the market is in its second month of “pessimistic” territory in July.

Among the challenges homebuilders face are production bottlenecks, rising home-building costs, and high inflation, according to the NAHB.

Those sentiments are also echoed in June housing starts data from the Commerce Department, which fell 2% to a nine-month low.

The National Association of Realtors showed sales of preowned U.S. homes slid 5.4% from May to June and plunged 14.2% from a year ago.

Just since January, existing home sales have slid by 21.1%, a downward slope that coincides with the average 30-year fixed contract rate climbing 249 basis points to 5.82%. This is the highest level since December 2008, according to the Mortgage Bankers Association, which also reports overall mortgage demand has touched a 22-year low.

With this cooling demand, the number of months’ supply of pre-owned homes on the market has recovered to 2.9, the most plentiful inventory print since July 2020.

While data looks backward, the stock market looks forward, reflecting where investors believe the sector will be in six months to a year.

The Philadelphia SE Housing index is still outperforming the broader S&P 500 since the nadir of the COVID-19 sell-off on March 23, 2020.

But that relationship reversed around the time mortgage rates started on an uphill trek.

So far this year, the HGX and the S&P 1500 Homebuilding index have consistently underperformed the bellwether index.

The Federal Reserve’s two-day policy meeting convenes on Tuesday and is expected to culminate in the second straight 75 basis point interest rate hike. The central bank has pledged to rein in inflation while also trying to avoid tipping the economy into recession.

But what does that mean for housing stocks going forward?

“The housing market and homebuilding are early cyclical movers and we’re in late-cycle pre-recession,” said Ken Leon, director of equity research at CFRA in Washington.

“The trends are going to continue to be challenging for the housing market.”