MSM is not the cause of HIV, ignorance is

MSM is not the cause of HIV, ignorance is 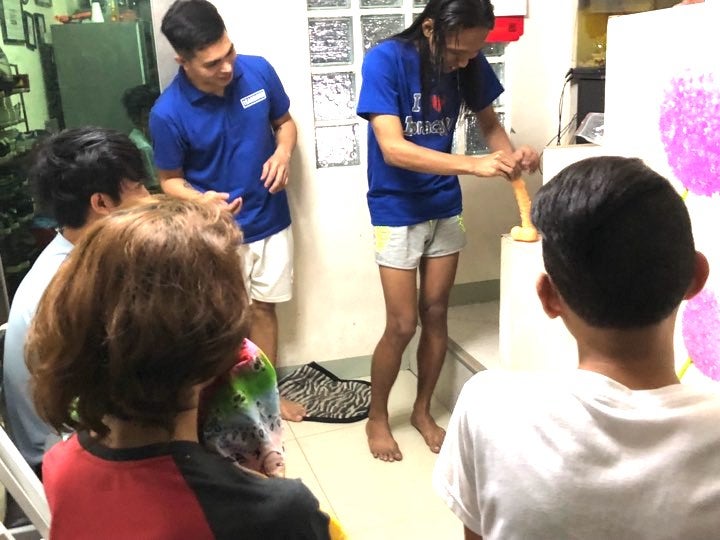 Kiko de la Tonga (left) during information campaign among young gays; a gay man shows how to put on a condom. CONTRIBUTED

Although only 27kilometers away from Metro Manila, Malanday, San Mateo, Rizal, is still considered rural, with vacant lots and farmlands. In the afternoon, youngsters and adults can still play volleyball.

After the game, they would usually hang out at the nearby sari-sari store and wait for the balut vendor and Kiko de la Tonga, who would share stories with them about being “bakla” or gay. They are “baklita” (young gays), ages ranging from 13 to 20 years old.

De la Tonga is a former Likhaan employee, but ever since he got into a serious relationship, he now only does volunteer work. The baklitas in the village are his flock.

Likhaan is a non-government organization founded by Drs. Junice Melgar and Sylvia Claudio in 1995. Although much of their work is focused on women, they also promote safe sex in gay communities.

In August 2017, the UNAIDS reported that the estimated population of gay men and other Men who have sex with Men (MSM) accounts for 531,500, with an HIV prevalence of 4.9% in Asia and the Pacific.  New infections in the Philippines doubled in the past six years, making its HIV epidemic the fastest growing in Asia and the Pacific.

The Philippines’ Department of Health (DOH) Report in August 2017 showed that sexual contact was the mode of transmission of the 1,892 cases. In the same report, from 1984 to August 2017, 88 percent was from an MSM population. Thirty-eight cases involved minors under 15 years old.

The rise in infection figures has renewed accusations by social conservatives and strict Christians that sex between males is the cause of HIV transmission.

Roy Wadia, a journalist and HIV advocate working in the UN System says, however: “On many fronts the situation has only gotten worse in many countries, fueled by stigma and ignorance. There are many within governments and health authorities and faith-based organisations who are forward-thinking, but many politicians, hardline religious figures and other constituencies are thwarting efforts at openness, inclusion and compassion.”

A predominantly Catholic country, the Philippines’ reproductive health and sex education drives in schools are hindered because of strong opposition from Church officials. Instead of protection, the Church calls for “abstinence.”

Even President Duterte undermines condom use as a means of protection against pregnancy and STDs, which is inimical to the guidelines of Republic Act 8504 (Philippine AIDS Prevention and Control Act of 1998).

Although monogamous sexual activity can help in the prevention on the spread of HIV, it is also important to identify the factors that fuel the rise of HIV among the young males.

“They know about HIV but still lack the necessary information. They don’t have access to condoms,” De la Tonga confirms.

Chris Lagman, the director of learning and development of Love Yourself, agrees.

“The numbers may point to some pattern, perhaps some correlation, that one can assume that the rapid spread of HIV is among MSM, but this does not mean that the cause is the MSM. The answers are not difficult to obtain, and we know it is about stigma, lack of awareness and education, and lack of access to HIV testing and treatment.”

Republic Act 8504 also instructs the education sector to integrate information (provided by the DOH) on the causes, modes of transmission and ways of preventing HIV/AIDS and other STDs in all subjects taught in in all levels except primary. The law also provides protection and medical and health intervention among persons with HIV.

Aside from hospitals, non-government organizations like LoveYourself, contribute to halting the HIV epidemic in the Philippines. LoveYourself is a community-based organization operating three volunteer-run community centers that offer free HIV education and testing and condom distribution.

“We have started offering PrEP (pre-exposure prophylaxis) in June 2017, the first in the Philippines. I’m expecting that we are able to scale this up towards the end of 2018, early 2019,” Lagman says.

“The majority of the barriers to a person living with HIV’s access to biomedical treatment are non-biomedical, e.g. issues with partner, family, finance, self-worth, depression, etc. We use life coaching to address this,” Lagman explains.

According to Rosemin de los Trinos-Balbido, an obstetrician-gynecologist at the Medical City in Pasig, HIV screening is being encouraged; thus, it is expected that more cases will be recorded yearly. Free HIV screening tests are also done in hospitals and centers accredited by the Department of Health (DOH). Counseling and anti-retro viral treatment are also free.

The efforts of organizations, individuals, DOH, and UNAIDS are making a positive impact on the lives of people. HIV cases in the Philippines rise not because of MSM practices. It is not a matter of morality but of responsibility to protect oneself and the others.

“We have made strides and must continue to educate and enlighten, amid formidable challenges. Love ultimately is supreme,” Wadia says.

On March 14, De la Tonga with the Likhaan Family Planning services and HIV and AIDS Support House, Inc. will conduct the first ever HIV Community Based Screening for the baklitas, elderly bakla, and others who want to avail of it in Malanday. Of course, there will be condoms available.