Thursday’s congressional committee hearing on Jan. 6, 2021, Capitol riot by supporters of Donald Trump featured minute-by-minute accountings of the then-president’s actions — and inaction — as his supporters launched a violent attack.

Here are six takeaways from the hearing:

The committee showed a well-known image of conservative Republican Senator Josh Hawley, who is thought to be eyeing a run for president, outside the Capitol raising his arm, hand balled into a fist, to encourage the gathering of angry crowds still being held behind security lines.

While that image was familiar, indeed one that Hawley has used to raise money, the committee followed up with new images: Multiple video clips of Hawley running from the rioters, first fleeing across a hallway and later down a flight of steps.

The hearing room, packed with reporters, congressional aides, security staff, and visitors broke into laughter as the footage was played.

Vice President Mike Pence sheltered in his ceremonial office on the second floor of the Senate as rioters pushed closer and closer, as seen in videos shown at the hearing.

There was smoke in a nearby hallway as U.S. Capitol Police tried to corral a group of attackers, and Secret Service agents desperately tried to figure out whether they could safely evacuate Pence to another location on the Capitol grounds. 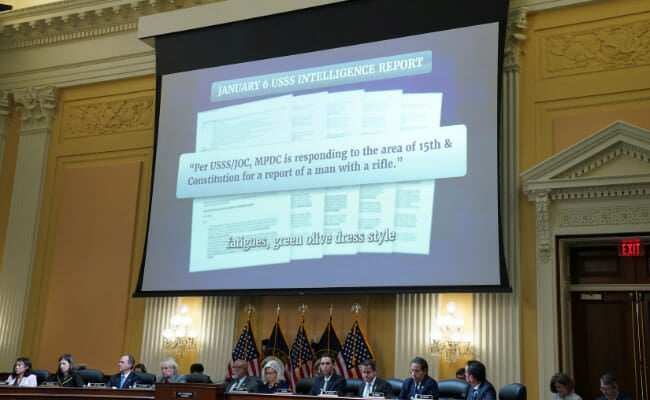 An image of an email from the U.S. Secret Service intelligence division reporting that people in the crowd on January 6, 2021 were armed with weapons is displayed above the committee during a public hearing of the U.S. House Select Committee to investigate the January 6 Attack on the U.S. Capitol, on Capitol Hill in Washington, U.S., June 28, 2022. REUTERS/Kevin Lamarque

“The security detail of the vice president was starting to fear for their own lives,” one anonymous White House security official testified on video played at the hearing.

Rioters were just feet away, the official testified, adding that agents were “screaming and saying goodbye to family.”

Pence ultimately was hurried to a Capitol loading dock.

Matthew Pottinger, a deputy national security adviser under Trump, testified that the riot not only resulted in U.S. allies voicing concern “about the health of our democracy,” but also gave comfort to America’s adversaries.

“I think it emboldened our enemies by helping give them ammunition to feed a narrative that our system of government doesn’t work; that the United States is in decline,” Pottinger said.

Even before Jan. 6, as Trump falsely claimed the presidential election was stolen from him, Pottinger said he feared Washington’s adversaries would be tempted to test U.S. resolve, noting an attack in late December on the U.S. embassy in Baghdad, Iraq, by militias he said were backed by Iran.

HIGH-PROFILE HEARINGS NOT OVER YET

Committee Chairman Bennie Thompson said the investigation is continuing with more people offering to be witnesses.

Thompson tamped down speculation that this eighth hearing of the summer may be the last, saying more are in store for September, just weeks before the Nov. 8 midterm elections that will decide whether Republicans take majority control of the Senate or House of Representatives. 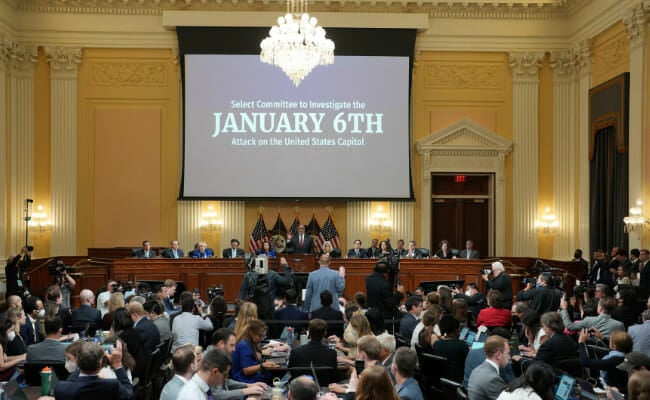 TRUMP ‘CHOSE’ NOT TO STOP THE RIOT

Representative Adam Kinzinger, one of two Republicans on the House’s select committee, portrayed a president who was satisfied with the violence he watched unfolding at the Capitol on Jan. 6.

“The mob was accomplishing President Trump’s purpose, so of course, he didn’t intervene” to stop the violence until more than three hours after it had begun, Kinzinger said.

“President Trump did not fail to act during the 187 minutes between leaving the Ellipse and telling the mob to go home. He chose not to act.”

TRUMP MADE NO CALLS TO TOP OFFICIALS

High-ranking officials, including then-White House Counsel Pat Cipollone, testified on pre-recorded videotape that the president watched television for hours during the Capitol riot in the White House dining room.

They said that they were not aware of Trump making phone calls to Cabinet heads, including the secretaries of defense and homeland security, the attorney general, or the National Guard, all of whom could have aided in stopping the violence on Capitol Hill.