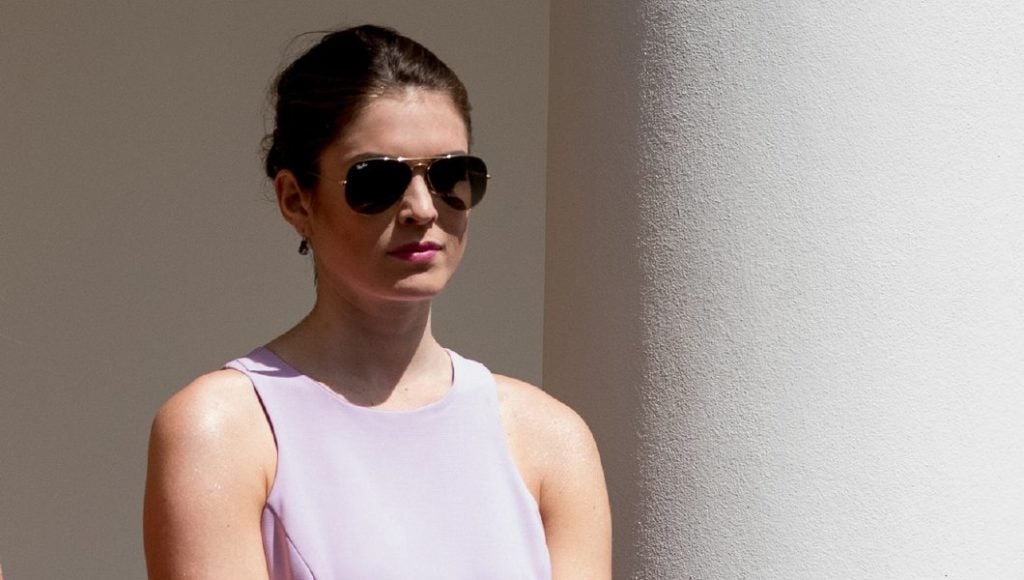 Communications Director Hope Hicks, one of President Trump’s most trusted aides, abruptly announced her resignation Wednesday. Hicks is under the political magnifying glass, which might have affected her decision. AP PHOTO

WASHINGTON, DC— Rattled by two weeks of muddled messages, departures and spitting matches between the president and his own top officials, Donald Trump is facing a shrinking circle of trusted advisers and a staff that’s grim about any prospect of a reset.

Even by the standards of Donald Trump’s often chaotic administration, the announcement of Hope Hicks’ imminent exodus spread new levels of anxiety across the West Wing and cracked open disputes that had been building since the White House’s botched handling of domestic violence allegations against a senior aide late last month.

One of Trump’s most loyal and longest-serving aides, Hicks often served as human buffer between the unpredictable president and the business of government.

One official on Thursday compared the instability caused by her departure to that of a chief of staff leaving the administration — though that prospect, too, remained a possibility given the questions that have arisen about John Kelly’s competence.

Hicks’ departure comes as special counsel Robert Mueller’s investigation appears to be circling around the Oval Office, with prosecutors questioning Trump associates about both his business dealings before he became president and his actions in office, according to people with knowledge of the interviews. Jared Kushner, Trump’s son-in-law and senior adviser, has also been weakened after being stripped of his high-level security clearance amid revelations about potential conflicts of interest.

The biggest unknown is how the mercurial Trump will respond to Hicks’ departure and Kushner’s more limited access, according to some of the 16 White House officials, congressional aides and outside advisers interviewed by The Associated Press, most of whom insisted on anonymity in order to disclose private

conversations and meetings. Besides Kushner and his wife, presidential daughter Ivanka Trump, most remaining White House staffers were not part of Trump’s close-knit 2016 campaign. One person who speaks to Trump regularly said the president has become increasingly wistful about the camaraderie of that campaign.

Rarely has a modern president confronted so many crises and controversies across so many fronts at the same time. After 13 months in office, there’s little expectation among many White House aides and outside allies that Trump can quickly find his footing or attract new, top-flight talent to the West Wing. And some Republican lawmakers, who are eying a difficult political landscape in November’s midterm elections, have begun to let private frustrations ooze out in public.

“There is no standard operating practice with this administration,” said Sen. John Thune of South Dakota. “Every day is a new adventure for us.”

Thune’s comments described the White House’s peculiar rollout Thursday of controversial new aluminum and steel tariffs. White House aides spent Wednesday night and Thursday morning scrambling to steer the president away from an announcement on an unfinished policy, with even Kelly in the dark about Trump’s plans. Aides believed they had succeeded in getting Trump to back down and hoped to keep television cameras away from an event with industry executives so the president couldn’t make a surprise announcement. But Trump summoned reporters into the Cabinet Room anyway and declared that the U.S. would levy penalties of 25 percent on steel and 10 percent on aluminum imports.

Some of Trump’s populist supporters cheered the move. The stock market, which Trump looks to for validation for his economic policies, plunged. Some officials are bracing for more departures. On Thursday, NBC News reported that the White House was preparing to replace national security adviser H.R. McMaster as early as next month. A White House spokesman did not deny the report.

“We frequently face rumor and innuendo about senior administration officials,” spokesman Raj Shah said. “There are no personnel announcements at this time.”

Kelly on the ropes

For those remaining on the job, the turbulence has been relentless. Just two weeks ago, Kelly, the general brought in to bring order, was himself on the ropes for his handling of the domestic violence allegations against a close aide, Rob Porter. Trump was said to be deeply irritated by the negative press coverage of Kelly’s leadership during the controversy and considering firing him.

But first, the president planned to give his chief of staff a chance to defend himself before reporters in the briefing room and gauge the reaction, according to two people with knowledge of the episode. The briefing, however, was canceled after the school shooting in Parkland, Florida. Kelly’s standing has stabilized somewhat as media attention to the Porter issue has waned.

One Kelly backer said the chief of staff’s standing remains tenuous, in part because of his clashes with Kushner over policy, personnel and White House structure. The tensions were exacerbated by Kelly’s decision to downgrade Kushner’s security clearance because the senior adviser had not been permanently approved for the highest level of access.

Kushner and Ivanka Trump, who also serves as a senior White House adviser, have been frustrated by Kelly’s attempt to restrict their access to the president, and they perceive his new crackdown on clearances as a direct shot at them, according to White House aides and outside advisers.

Kelly, in turn, has grown frustrated at what he views as the couple’s freelancing. He blames them for changing Trump’s mind at the last minute and questions what exactly they do all day, according to one White House official and an outside ally.

Allies of Kushner and Ivanka Trump insist they have no plans to leave the White House in the near future. As for Kelly, he appeared to hint at his tough spot during an event Thursday at the Department of Homeland Security, where he served as secretary before departing for the White House.

“The last thing I wanted to do was walk away from one of the great honors of my life, being the secretary of homeland security,” he said at the agency’s 15th anniversary celebration in Washington. “But I did something wrong and God punished me, I guess.”