Ex-Trump adviser Steve Bannon offers to testify in US probe of Jan. 6 attack

Ex-Trump adviser Steve Bannon offers to testify in US probe of Jan. 6 attack

Donald Trump’s former close adviser Steve Bannon has told the congressional panel investigating the Jan. 6, 2021 attack on the U.S. Capitol that he is ready to testify, a change of heart days before he is due to be tried for contempt of Congress.

In a letter to the committee seen by Reuters, Bannon’s lawyer Robert Costello wrote to say the former president would waive the claim of executive privilege which Bannon had cited in refusing to appear before the committee.

Bannon, a prominent figure in right-wing media circles who served as Trump’s chief strategist in 2017, is scheduled to go on trial on July 18 on two criminal contempt charges for refusing to testify or provide documents.

The letter from the lawyer said Bannon preferred to testify publicly, but Representative Zoe Lofgren, a committee Democrat, told CNN that ordinarily, the committee takes a deposition behind closed doors. 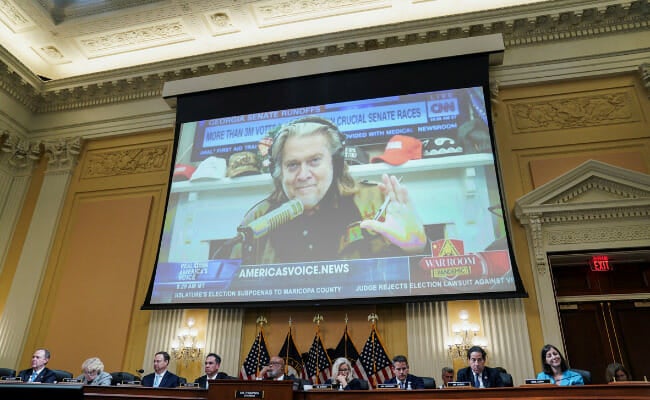 A video of Steve Bannon, talk show host and former White House advisor to former President Donald Trump, is seen displayed on a screen, during the third of eight planned public hearings of the U.S. House Select Committee to investigate the January 6 Attack on the United States Capitol, on Capitol Hill in Washington, U.S. June 16, 2022. REUTERS/Sarah Silbiger/File Photo

Throughout the House of Representatives committee hearings, videotaped snippets of closed-door testimony by witnesses under oath have been shown to the public.

Trump has been chafing that none of his supporters have testified in his defense at the committee hearings which, separate from the trial, are focused on the attack by Trump supporters seeking to stop the certification in Congress of Trump’s defeat by Joe Biden in the November 2020 election.

In a letter from Trump to Bannon seen by Reuters, Trump said he was waiving executive privilege because he “watched how unfairly you and others have been treated.”

The House panel is due to hold public hearings on Tuesday and Thursday this week.