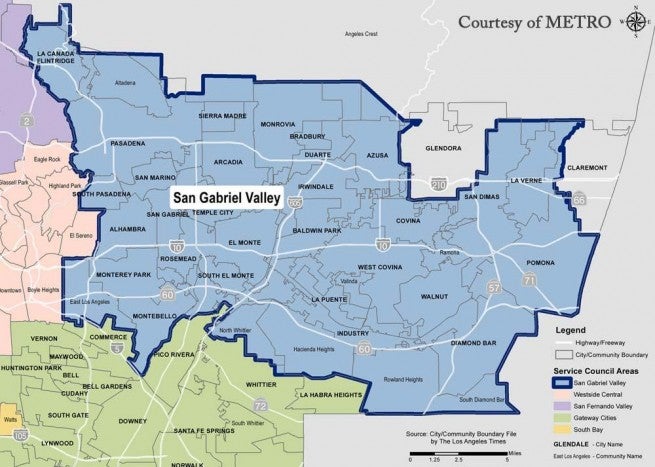 LOS ANGELES — To residents of the greater Los Angeles area, the San Gabriel Valley (SGV) is famously a cultural hub that boasts a strong minority and immigrant community.

Today, the AAPI community has surpassed whites as the second largest racial group (28 percent of the population) in the region behind Latinos (46 percent). Moreover, two-thirds of the Asian American community in SGV are immigrants

According to the latest data from the U.S. Census Bureau, there are more than 524,000 Asian Americans and more than 7,100 Native Hawaiians and Pacific Islanders (NHPI).

According to a brand-new study released by civil rights organization Asian Americans Advancing Justice-Los Angeles, the AAPI community in SGV is larger than those in 42 U.S. states.

The SGV’s AAPI community is also larger than those of notably diverse cities like LA, San Francisco and Chicago.

“We’ve come a long way in some ways, but we haven’t come a long way in other ways. This report tells us the full story of how well we’re doing,” Advancing Justice-LA President and Executive Director Stewart Kwoh said at a media event for the report on Wednesday, February 21 in Alhambra.

The SGV report, called “A Community of Contrasts: Asian Americans, Native Hawaiians, and Pacific Islanders in the San Gabriel Valley,” is a part of a series of future reports on other regions that will focus on the demographic trends of the AAPI community.

Advancing Justice-LA put out the study in hopes of educating the public on the true breadth of the Asian American community in the SGV. But researchers hope that it could provide a useful resource for policymakers, community organizers, government agencies and businesses to better address the needs of the AAPI community.

“Asian Americans are the most immigrant of any major racial group, be it in the San Gabriel Valley, be it the state of California, be it nationally,” said Dan Ichinose, director of the Demographic Research Project at Advancing Justice-LA. “These data consistently show that immigration policy isn’t just something that affects Latinos; it is something that affects Asian American communities in a really significant way.”

Language barriers are at the root of many of the issues that plague the AAPI community in general and SGV specifically. Almost half (46 percent, or over 242,000 residents) of AAPIs are limited English proficient (LEP).

LEP workers — especially those in blue-collar jobs — are more susceptible to discrimination in the workplace including underpayment and overworking due to an incomprehension of workers rights. Additionally, immigrant rights activists have fought against the region’s push to make English the official language, a move which they have deemed anti-immigrant.

Located just east of LA proper, the SGV — colloquially referred to by residents as “the 626” — extends from Alhambra and Monterey Park all the way to Diamond Bar and Pomona, roughly covering a 24-mile stretch that possesses a long history of Asian and Pacific Islander residency.

In the late 1800s, Chinese pioneers settled in the SGV and worked as laborers. Shortly thereafter, they were followed by Japanese, Filipino and South Asian migrants who also contributed to the agricultural labor force as well as domestic servitude to the wealthy.

By the 1970s the burgeoning Asian American and Pacific Islander (AAPI) community transformed the community into a dominant, cultural center, so much so that the area became a popular destination for an ample variety of Asian restaurants, organizations and businesses.

In a myriad of ways, the SGV can be seen as a microcosm of the country’s shifting demographics, in general.

Due to current naturalization trends, Asian Americans are the fastest-growing demographic in the United States which would dramatically shift the voter population at large; by 2040, the AAPI electorate is projected to double by 2040, according to a 2016 UCLA study.

The report noted that during the 2016 general election, Asian American voter registration surpassed the margins of victory of many local congressional districts. That being said, the AAPI community is likely to be a formidable body that could greatly affect the ways in which businesses are run, policies are put in place and elections are voted.

“There is no way we can fully understand the true changing story of the San Gabriel Valley. But having this concept started will help us better understand who we are, the Asian American and Pacific communities,” said Lily Lee Chen, who broke the mold in 1983 for Asian lawmakers when she became the first Chinese-American female mayor in the United States. “First we go from here. We need to travel the journey together. We need your support.”

To view and read the study, visit https://sgv2018.herokuapp.com/.