Transformations and twists thrive in the new 'Thor' film

Transformations and twists thrive in the new ‘Thor’ film

Twists and turns are in store for fans of Marvel Studios’ “Thor: Love and Thunder,” not least one from an unlikely new superhero.

Offscreen, Hemsworth had nothing but respect for Portman, who last played Foster in 2013’s “Thor: The Dark World.”

“Blown away, beyond impressed,” Hemsworth said in an interview. “I started this journey with Natalie 10, 11 years ago and now to see her as this character is amazing and she did such an incredible job.”

Portman had to bulk up for the role. 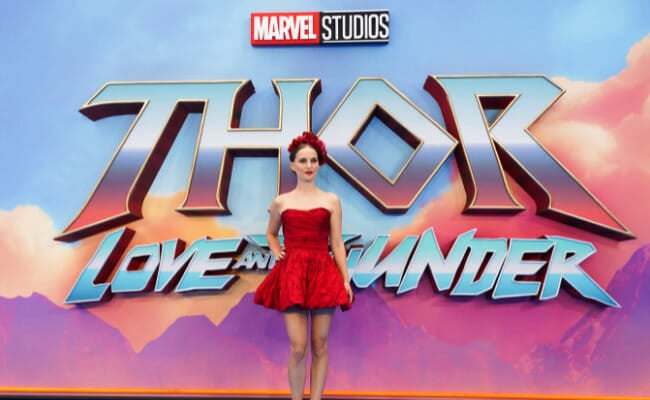 “The eating was really surprising. You have to eat so much all the time,” she said. “There’s so much protein, so many shakes. I love food so much, you never imagine that eating is a chore.”

“I suddenly couldn’t do anything, type anything and eat. I felt like I couldn’t even bloody move because of it,” Bale said, adding his character’s fangs made it difficult to talk.

“It made me end up being this skulking character … pacing around the set not talking but I was having immense fun doing that.”

Tessa Thompson returns as Valkyrie, no longer a drunk and with an impeccable English accent. Alongside Jane and Thor, she goes on a rescue mission after the children of the city of New Asgard are kidnapped by Gorr. Director Taika Waititi and the cast had enough children to play cameo roles.

“It was incredible also getting to have our kids on set,” Portman said. “Chris’ kids and Taika’s kids and Christian’s kids, everyone like running around and playing together. It was pretty dreamy as a working parent.”